Back in the day, thrifty Midwest snowbirds would visit the Mississippi Gulf Coast with a pair of shorts and a $100 bill–and not change either one for the duration of their stay.

All that changed 10 years ago, when casino gambling was legalized along the state’s Gulf of Mexico shoreline. Huge floating casinos, several of them replicas of old Mississippi River paddle-wheelers, are today moored to docks in the corridor between Gulfport and Biloxi, creating Vegas-style action with a festive New Orleans ambience.

Within a 30-minute drive of the neon facades of these giant multi-story barges, more than a dozen golf courses that have sprung up to accommodate the growing wave of golfers seeking an alternative to the usual Sun Belt destinations.

The best and brawniest among them is Grand Bear, a Jack Nicklaus-designed course that occupies a vast tract of land 20 minutes north of the coast. With the possible exception of Fallen Oak, a newer Tom Fazio layout outside Biloxi, the acreage set aside for this immodestly titled beast may be the finest ever made available for a resort course in the Magnolia State. Unveiled in 1999, this is the track that catapulted the region into the national spotlight and staked a claim for the Mississippi Gulf Coast as a bona fide golf destination.

Encased in a thick stand of yellow pine adjacent to De Soto National Forest, this majestic spread, its broad, gently rolling fairways trimmed in pine straw, offers exceptional pace and variety. From the Grizzly Bear tees at 7,204 yards (par 72), the challenge is firm but fair; from the Teddy Bear markers at 4,802 yards, the layout is downright cuddly for seniors, women and novices. Three additional sets of tees offer a good range of choices based on a player’s ability. Kicker slopes on the far side of bunkers add extra yards, while artfully curved slopes and ramps tend to feed the ball to the green on this player-friendly spread. Even the large scalloped bunkers, filled with bright white river sand, are fun to hit from. 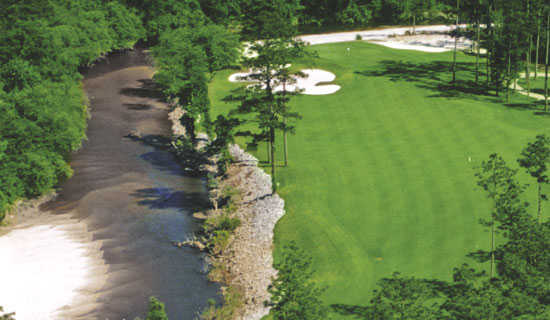 A bird's eye view of Grand Bear's back nine

Originally built by Grand Casinos for guests of its nearby Gulfport and Biloxi properties (Grand Bear is now operated by Caesars Golf), the developers wanted a venue that would make their high-roller clients feel good about their games. Nicklaus, who moved fewer than 250,000 cubic yards of dirt on a diverse site with a 40-foot elevation change, was more than happy to comply. Grand Bear is no pushover from the tips–Jack has yet to build a creampuff for anybody–but forward tees tend to widen the field of play and marginalize the hazards. There are no gimmicks. There is no chicanery. The golf is honest, straightforward and pristine.

From a purist’s point of view, the outgoing nine, which skirts the oxbow loops of the Little Biloxi River, boasts more superior golf holes than the incoming nine. But Grand Bear’s back nine is truly grand and very memorable. Cypress wetlands rimmed with live oaks, gum trees and old magnolias give way to the Big Biloxi River, its brilliant white sand banks girding three of the final four holes. Along the way is the 14th, a spectacular par 3 enclosed by subtropical vegetation, its bunkerless green perched several feet above a river backwater that holds a pair of nesting alligators; the brawny 15th, a colossal par 5 flanked by sand on the left and a bayou on the right; and the splendid par-4 17th, where better golfers stationed on the Grizzly Bear tees must launch their drives over a loop in the river to a scooped fairway that swings left to a skewed green. The river’s broad sandy bank serves as a waste bunker behind the undulating putting surface of this stellar Cape-style hole. The long par-4 18th, a classic closer, leapfrogs a wetland and plays uphill to a lodge-style clubhouse built with giant Montana logs that’s every bit as handsome and welcoming as the course that changed the destiny of the coast.

Other attributes have helped to define the Mississippi Gulf Coast as an alternative ‘Playground of the South.’ The weather–mild in winter, moderate in summer, perfect for golf in spring and fall–is a big draw. Fishing in the Gulf, from inshore to deep-sea, is excellent. The 26-mile strip of white sand beach fronting the Gulf is the longest man-made sand beach in the world. It looks natural despite the hit it took from Hurricane Katrina.

There’s also Dixie culture and regional cuisine available. Civil War buffs can visit Beauvoir, the final home of Confederate President Jefferson Davis. Art galleries, antique stores and antebellum mansions can be found in and around Biloxi. With a tip of the hat to nearby New Orleans, the zesty Creole and Cajun fare served along the Mississippi Gulf Coast is authentic, from crabmeat-stuffed red snapper and spicy gumbo to blackened shrimp over dirty rice.

And then there’s barbecue. As in B-B-Q. An observation: The funkier the pit, the spicier the sauce.

Finally, for golfers who enjoy revelry, there’s a Mardi Gras held each February in the Biloxi-Gulfport area that’s just as colorful (and a little saner) than the Bourbon Street celebration.