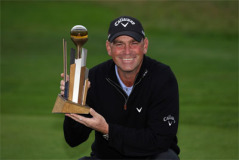 Why is this man smiling? He doesn't have to play the 18th hole again!

Under normal circumstances, a five-man, five-hole playoff would be an exciting thing to watch.  Playoffs make you sit up on the edge of your seat and pay attention — which isn’t always the case as golf tournaments wind down.  But if ever there were an event that needed a new playoff format, it’s this one.

When Mark Foster bogeyed his 72nd hole to fall into the playoff with (in order of playoff exodus) Bernd Wiesberger, Pablo Larrazabal, George Coetzee and eventual winner Thomas Bjorn, I couldn’t wait to see who would prevail.   Would Foster use his mulligan to birdie the 18th the second time around and take the crown anyway?  Would two (or more) other players halve the hole with birds and move on?  Would somebody make bogey — or worse — and drop out right away?  A golf enthusiast’s mind was swimming with possibilities.

As in many playoff situations, the nerves showed on the first playoff hole.  Wiseberger, first up, pull-hooked his tee shot into an unplayable lie and made bogey.  No one else bogeyed, but neither did they make birdie.  Four players moved on to the next playoff hole.

And that’s when the playoff went horribly wrong.  Because there was no “next” playoff hole!  Instead of moving on to one of the Gleneagles PGA Centenary Course’s other holes (such as they are), the remaining competitors returned to the 18th tee again.  And again.  And again.  If you love the 18th on the Centenary, you were in ecstasy.  Otherwise, you were probably reaching for a dram of Johnnie Black right along with me.  The 18th on the Centenary Course is quaintly nicknamed “Dun Roamin'” — but these poor players were far from done with it!

Sudden death?  No — this was prolonged agony.  It might have helped if the hole wasn’t a three-shot par 5.  But whatever happened to variety being the spice of life?  In fairness, the Johnnie Walker Championship isn’t the only tournament that uses the same initial playoff hole more than once.  But most events will draw the line at two trips up the 18th — and dictate that if it’s still tied after that, the players move on to a different hole.

Clearly, whoever thought up this playoff format had had one too many.