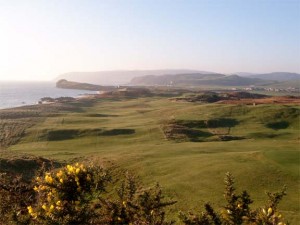 The biggest mistake most golfers make when they plan a golf pilgrimage to Scotland is focusing on just the big-name courses – the trophy courses, the ones that host Open Championships.  If you’ve only got five or six days to play over here, it’s understandable that you’d want to walk the same fairways as Nicklaus, Watson, Norman and Woods – and before them Jones, Taylor, Braid and the Tom Morrises, Old and Young.  But Scotland is blessed with an innumerable number of equally delightful lesser-known courses, most of which are in close proximity to the big boys.  Dunaverty Golf Club is just such a course.

This 18-hole, par-66 layout is located at the tip of the Mull of Kintyre in the town of Southend, just down the road from Machrihanish Dunes and Machrihanish Golf Club.  It’s only 4799 yards long, but it’s an incredibly fun and scenic track.

For the Road Warriors group, it was the first course we’ve played on our visit to western Scotland.  And in many ways, it was the perfect choice.  After 20+ hours of traveling, you don’t want to take on a full-blooded monster.  But nor do you want to just check into your hotel and twiddle your thumbs until the next day’s tee time beckons.  Jumping out onto Dunaverty was the perfect way for our group to get our feet under us.  From its rolling fairways, we were treated to beautiful views of Northern Ireland, Sanda Island, Ayrshire and the famous Ailsa Craig. The course winds up and down some steep hills, forces you to concentrate on your shots, but doesn’t beat you up.

Founded in 1899, Dunaverty has been remodeled, extended and tweaked over the years – to the point that the track you can play now is a both a good, fun test and an invigorating day. The par 3s here in particular will test your mettle – especially the 245-yard 6th.

Dunaverty has produced many fine golfers over the years, although none with more renown than Belle Robertson. Robertson grew up on a nearby farm and developed her early golf skills at Dunaverty before going on to win just about every honor she could earn in the 1960’s, 70’s and 80’s, including the Scottish Ladies’ and British Women’s Championships as well as representing Britain and Ireland in the Curtis Cup.

Not many would have finished all 18 in the weather we played in at Dunaverty today.  But you don’t come across courses like this every day.  Rain or shine, it’s a joy here.  Just ask Jim, the man of the clubhouse at Dunaverty.  He’ll tell you in the warmest way how the sun always shines over this place.