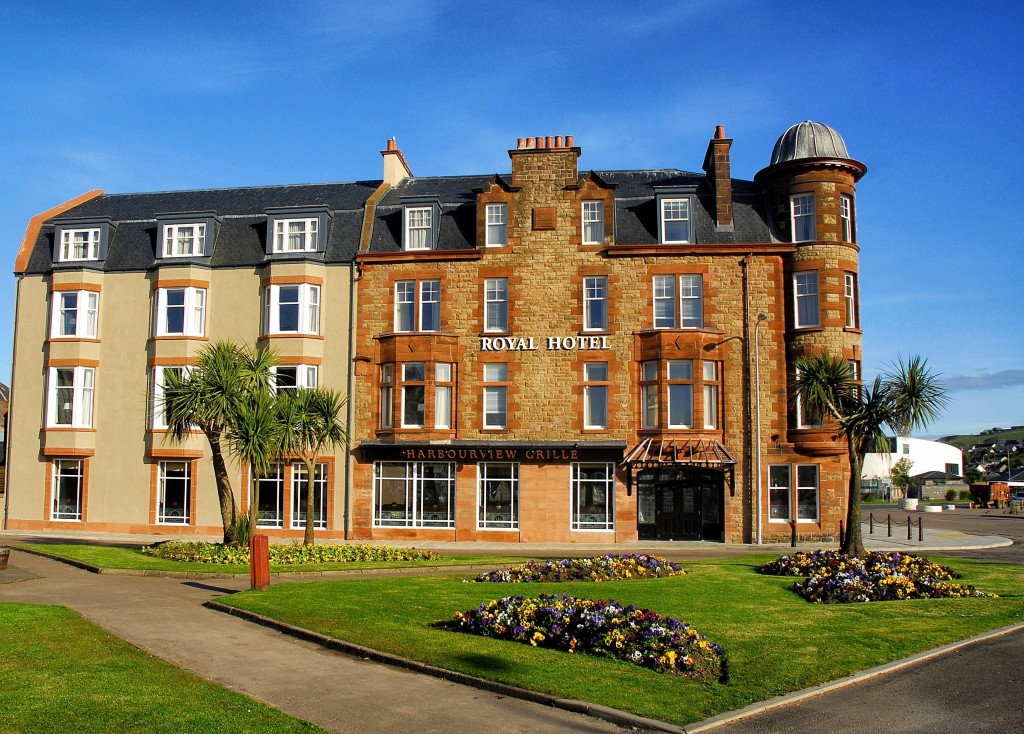 The Royal Hotel in Campbeltown

How do you win the hearts of the citizens of a proud Scottish town?  Take a derelict landmark hotel, spend millions restoring it and bringing it up to four-star standards, hire dozens of local people to staff it, and throw a grand re-opening party with the biggest fireworks display they’ve seen in years.  That’s what Southworth Europe has done with The Royal Hotel in Campbeltown, Scotland on the scenic Kintyre Peninsula.  Part of The Village at Machrihanish Dunes, The Royal joins its sister hotel, The Ugadale Hotel and Cottages, in offering a standard of service to locals and visitors alike that hasn’t been seen in these parts for a very long time.  It’s part of a Campbeltown renaissance that has brought smiles to the faces of not just the locals, but visiting golfers, as well, who come to the area to play Machrihanish Dunes Golf Club and neighboring Machrihanish Golf Club.

The Royal Hotel makes the most of its premier location overlooking Campbeltown Harbour and Loch. Guests at The Royal enjoy unforgettable views of the harbour area, with its stone piers and scenic walkways. Within the hotel, you’ll find all the contemporary conveniences and amenities you’d expect in a modern luxury accommodation, set in surroundings steeped in old-world elegance.  The Royal has 23 sumptuously appointed guest rooms, all of which offer harbour views.  The hotel has a wonderful restaurant – The Harbourview Grille – and a lively pub called The Black Sheep, so named for the logo mascot of The Village at Machrihanish Dunes resort.

Once hailed as a destination for the Scottish ‘elite’ during the turn of the 20th century, The Royal Hotel holds a special place in Campbeltown history.  In July 1907, Archibald Johnston, the proprietor of another nearby hotel, applied for a warrant to erect accommodation fronting Main Street and Kinloch Road.  The idyllic waterfront site where The Royal sits today was then just a coal yard where Johnston would set out to create a “very handsome” hotel that would “greatly improve the amenity of the Pierhead” on Campbeltown Harbour.  The design was spearheaded by renowned architect James M. Monro of Glasgow, who later designed the Grand Hotel in St. Andrews using a similar but larger plan.   The Royal soon came to occupy the prominent street corner overlooking Campbeltown Harbour at the very heart of Campbeltown.

The Royal’s unmatched waterfront location was to its detriment in early November 1940 when the Hotel and Campbeltown became the targets of a German aerial bombing.  Ever resilient, the town restored itself following the attacks of World War II and further development of the Pierhead and adjacent shore brought bustling tourism back to the area.  The Royal remained a focal point for the town in the years following the attack, contributing to its image as something more than a building, but a celebrated icon of Campbeltown and the Kintyre Peninsula.  The hotel continued to play host to numerous weddings, celebrations and its famed Sunday tea within its elegantly appointed walls, bringing together locals and travelers alike.  In short, the Royal Hotel lived on as the town jewel – a center of revelry and celebration for all those who visited and lived in Campbeltown.

Local visitors to the hotel’s grand re-opening shared many emotional stories of having worked there or attended weddings there in days past.  The community has embraced the hotel like a prodigal son, and it is indeed a godsend for a town that has been looking to revitalize its tourism industry.

In addition to bringing valuable jobs to the area, Southworth Europe has invested over $30 Million in the overall project, the creation of which was also aided by grants from Highlands and Islands Enterprise (HIE) totaling £2.2 Million, including £886,000 from the European Regional Development Fund (ERDF).  In addition, HIE provided a grant totaling £509,606 for the development of the Machrihanish Dunes Golf Course, which opened in 2008.  A special grant was also awarded to the Royal Hotel by the Scottish Ministers through Historic Scotland, under the Historic Environment Regeneration Fund, and by the Campbeltown Town Centre Regeneration Project (Argyll & Bute Council).

The grand re-opening party Southworth threw for its newest luxury hotel on Saturday 12 May was attended by international journalists from many countries, Scottish government leaders, travel and golf tour operators, and a long list of local VIPs, many of whom had a hand in bringing The Royal back into being.  The next day, the hotel threw open its doors to the public, and over the course of the afternoon people from Campbeltown and neighboring communities toured through the building to see the region’s newest – and one of its grandest – hotels.  The smiles on their faces provided all the proof one could want that The Royal would be a source of pride for them for many years to come.

For the town, for visiting golfers and other tourists, for traveling business people, The Royal Hotel is changing the face, and the future, of this quaint fishing and whisky-producing town for now the second time.  The newly refurbished Royal has ushered in a new chapter in the story of the life of Campbeltown – and it’s a tale that everyone involved is happy to be seeing written.