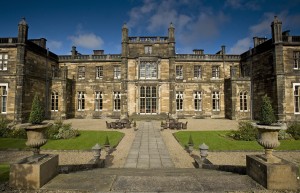 The Golf Road Warriors Scotland group has reached the final day of its trek through southwestern Scotland.  And we’re winding up our visit in grand style at The Mar Hall Golf & Spa Resort.  Mar Hall is located in Bishopton, just a few long par 5s from Glasgow Airport, which makes it the perfect place to begin — or end — your exploration of the golf opportunities in this beautiful part of Scotland.  If you’re flying into Glasgow from overseas, it’s an ideal first stop.  Here, you can shake off your jet lag, play a quick nine (or 18) holes on the challenging Earl of Mar course, enjoy afternoon tea in the hotel’s grand hallway, treat yourself to a gourmet dinner, then get some rest before setting out to take on the other great courses of Ayrshire.  If you’re at the end of your trip, it’s a great place to play one last round, maybe get in a massage in the U.K.’s only Aveda Destination Spa, and have an easy run to the airport the next morning.  Either way, this hotel can make your travel easier and certainly more enjoyable. 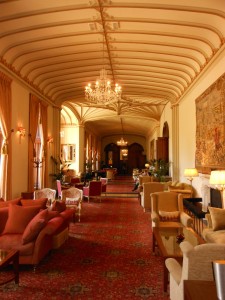 Mar Hall's grand hall lives up to its name.

Mar Hall itself was designed by Sir Robert Smirke at the behest of Major General Robert Walter Stuart, the 11th Lord Blantyre, whose family had owned these grounds for over a century.  It was Smirke’s wish that the building resemble the gothic-style manorial homes popular during the reign of Queen Elizabeth I.  Stone for the impressive building was quarried on site, while all the wood used in the home, mostly beautiful oak, was imported from Canada.  Construction took over 20 years, and wasn’t completed until 15 years after Lord Blantyre had passed away.  Talk about an untimely death!

Mar was one of seven kingdoms in ancient Scotland, and “Earl of Mar” is the oldest title in Britain.  History suggests that both Mary Queen of Scots and Robert the Bruce visited the Mar Estate.  Today it was our turn.

From the moment you enter through Mar Hall’s 25-foot-tall front doors, you know you’re in a five-star resort.  The furnishings in the grand hall take you back more than a century, to an age when afternoon tea was a daily occurrence — and an elaborate affair.  Today, it’s a great place to unwind, listen to piano music, have a cocktail or two and just soak in the rarified air.  If you’ve always wanted to feel like royalty and be treated like a king, this is the place to come.

The hotel’s bedrooms are enormous affairs with high ceilings, king-sized beds, stately furniture and bathrooms that feature both showers and baths — in addition to the complimentary Aveda toiletries.  Mar Hall’s Aveda Destination Spa is the perfect place to have aching muscles massaged, or windburned faces restored to health.  It offers eight treatment rooms and a team of therapists with magic fingers.  This afternoon, after our 7th round of golf in seven days, I availed myself of a full-body massage in the spa.  And all I can tell you is that I left the session a new man, ready to return to the real world of airplanes and day jobs with renewed vigor. 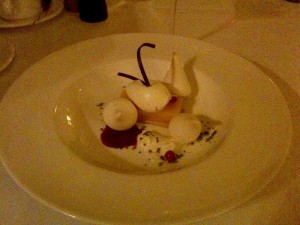 The lemon curd tart dessert with meringue whispies is just one of the amazing culinary creations from chef Sam Carswell.

As you would expect at a resort of this caliber, the quality of the culinary offerings at Mar Hall is off the charts.  Lunch in the hotel’s spike bar today centered around a wonderful (and large) club sandwich, which was preceded by a cup of Scotland’s most famous soup, Cullen Skink — a creamy, fish-based delight.  For dinner in the elegant Cristal restaurant, the GRW Scotland group was treated to a special eight-course dining experience, with exquisite wine pairings for each course.  It began with Pumpkin Espuma, which was followed by Smoked Cauliflower Custard with Lobster, Crab and Smoked Salmon, which was followed by Rabbit Terrine, which was followed by Veloute of Pea and Beignet of Dundee Cheddar, which was followed by Truffle Leek with Langoustines, which was followed by Lamb accompanied by Sausage Roll of Shoulder, all of which culminated in Chocolate Granache with pistachio and cherry.  All in all, there were more imaginative culinary creations than you would have ever thought possible for there to be in all of Scotland.  Chef Sam Carswell Restaurant Manager/Chief Sommelier Frankma Canas Romero are stars of the highest order.  To find them in Glasgow Scotland preparing creations like the ones we had tonight is perhaps the biggest surprise of our entire trip.  But maybe it shouldn’t have been.  Mar Hall is, after all, a five-star resort.

The daily menu offers dishes that are equally extraordinary — all prepared under the watchful eye of chef Carswell.  Starters like parma ham with roast figs, parfait of foie gras with shallot chutney, and potted crab with melba toast are just a few of the options.  For your main course, the fillet of scotch beef is superb — and it will be prepared as you like it here where medium rare really does mean medium rare.  The pan-fried sea bass with crushed minty peas, balsamic and chips is another excellent choice, as is the honey glazed confit of duck.  For dessert — if they happen to be serving the lemon curd tart with meringue buttons and pomegranate seeds, be sure to order it.

After dinner, be sure to sample the extensive single-malt whiskys the hotel offers in the Spike Bar.  There’s no better way to cap off golf a trip to Scotland than with a dram or two of Springbank 15 year-old.

It’s been an amazing trip.  We’ve seen things we never thought possible — and weather we never want to see again.  We’ve enjoyed warm welcomes all through southwestern Scotland at golf clubs and hotels that are simply unforgettable.  And along the way, we’ve shared our viewpoints and recommendations with you so that you can make the most of your next golf trip to this part of the world.  It’s a bit sad to see the trip coming to an end, but there’s joy in the thought of coming back to Mar Hall, Machrihanish Dunes, and the wonderful links golf courses of Ayrshire and Kintyre.  I know I’ll be coming back.  And I hope to cross paths with you when I do.

For more on the adventures of the Golf Road Warriors Scotland, click here.