To celebrate Open Championship week, I thought I’d post a profile each day between now and Sunday of one of my favorite links courses in Great Britain and Ireland.  If you haven’t done battle with these courses, you surely should.

Royal St. George’s, site of the 2011 Open Championship, is a challenging champonship course – but it’s not my favorite “royal.”  With apologies to Royal Troon, Royal Birkdale, Royal Liverpool and the rest – and with most sincere apologies to the newest royal, Comely Kate, (a.k.a. Her Royal Highness The Duchess of Cambridge) – I have to go on record as saying that Royal Dornoch is unquestionably the fairest of them all.

Royal Dornoch Golf Club, which dates back to 1877, occupies some of the most exhilarating golfing terrain a links-lover will ever lay eyes on.  Old Tom Morris had a hand in its initial design, which was modified some few years later by Club Secretary John Sutherland when the gutty replaced the featherie and the course needed a wee bit of lengthening.  King Edward VII bestowed royal status on the club in 1906.  Course architect Donald Ross did a stint here as golf pro and superintendent. And golfers have been making the trek north to Dornoch ever since.

The course’s setting 45 minutes north of Inverness is timeless, with sweeping views of the sea and towering gorse bushes that when they’re flowering in early summer light up the sides of the course’s bounding fairways.  It’s a place that just feels completely authentic;  the challenges presented by the golf course most certainly are. 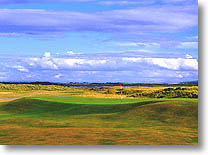 It’s been said that Ross developed his liking for inverted saucer greens and some of his general theories about hole design from his time at Dornoch.  I don’t know if that’s true or not, but the out-and-back layout of the championship course at Dornoch could certainly give lessons in what constitutes a great test of golf.  There are short holes like the opening and second holes, where mishit wedges can easily lead to double-bogeys.  There are devilish holes like the par-3 6th, with its vexing plateau green.  There are holes by the sea overlooking a beach that seems all but untouched by human history.  And then there’s “Foxy,” by my measure one of the top 10 golf holes in the world.

“Foxy” is the 14th hole, a bunkerless 445-yard par 4 that calls for a draw off the tee and a fade into the green, which is perched atop a promontory that only a high, soft approach shot will hold.  Miss the green, and you’ll be bumping-and-running up a steep rise to a green 10 feet above your shoes.  It’s a thoroughly natural hole without a trace of conceit.  It needs none.

After your round here, be sure to venture up to the clubhouse lounge and pay tribute to Andrew Carnegie, who donated what must surely be one of golf’s most spectacular trophies to the club – the Carnegie Shield.  This spectacular silver prize, which is awarded each summer at the conclusion of an open competition, is the size of a manhole cover and the most ornate trophy a golfer could ever kiss.

Better yet, download an entry form for the competition from the club’s Web site and see if you get lucky in the ballot.  You’re too late for this year, but there’s always 2012.