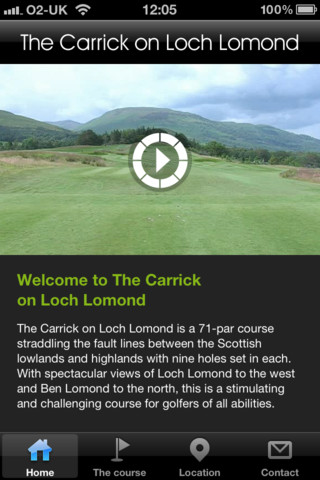 The World Golf Movies iTunes Movie-App helps golfers make the most of their visits to the world's great golf courses.

The first time I met Don J. Snyder, it was just after my son, a friend and I had finished playing the wonderful little seaside links course in Elie, Scotland.  Don and I had some mutual friends, and he was living in the area while caddieing up the road in St. Andrews.  All the previous winter, Don had been preparing to be a St. Andrews caddy by carrying a golf bag full of rocks around the course at Elie in conditions that can most succinctly be described as lousy. When it’s February and the icy wind is whipping in off the North Sea, walking Elie is no walk in the park.  But Don was doing it, daily, in order to make himself a better caddie — not just for the people he’d loop for in St. Andrews, but also for his son, Jack.

You see, when Don was a  young father just teaching his son the game, he promised him that if he ever became good enough to play on a pro tour he would be his caddie. The years turned and Don was nearing sixty when, in the summers of 2008 and 2010, he left his home in Maine to go work as a caddie in St. Andrews, Scotland — first at Kingsbarns Golf Links and then at The Castle Course and The Old Course — all to help prepare him for the job of caddying for his son on The Adams Golf Tour, which he did just this past winter.

During these two tours of duty in Scotland, Don discovered that the average golfer who travels around the world to play the great Scottish courses usually arrives on the first tee blind, without a strategy for how to attack the eighteen holes in front of him.  He has his digital sky caddie hanging from his bag to give him distances, a stroke saver yardage book falling from his pocket, the wind is howling, his caddie is a total stranger starting out with him on a four-hour blind date, everyone is nervous, there is another foursome breathing down his back, then the rain blows in, and by the seventh hole the golfer who has dreamed for years of getting here, has shelled out thousands of dollars to make it happen, and traveled thousands of miles with great expectations, has already made too many mistakes to recover a decent round.

One afternoon while caddying on The Old Course, Don began to consider that with the new technology available in smart phones, golfers could prepare for their journey to Whistling Straits, The Old Course, or Tory Pines by downloading to their cell phone or iPad a 20-minute interactive “Movie-App,” consisting of a hole-by-hole walking tour with a local caddie who explains the best way to play every hole. A better prepared golfer has a more satisfying experience, pace of play picks up, and that golfer becomes an eager ambassador for the golf courses where he has played his best.

When Don returned to his home in Maine, he started World Golf Movies with the belief that his Movie Apps would bring something new and meaningful to golfers — and also provide a new revenue stream for the individual golf courses; each time a Movie-App is purchased on iTunes, $3 goes directly to the course.

In early April, World Golf Movies presented its first Movie-App, which presented the magnificent Kingsbarns Golf Links.  Reviews for the app have been outstanding.  Recently, the Movie-App for The Carrick on Loch Lomond also went on sale.  By the middle of June, even more courses will be featured with Movie-Apps in the iTunes store: Royal Aberdeen, Royal Dornoch, Turnberry, and Prestwick.

Even the most established courses must keep an eye on the future, and Don plans to present his Movie-Apps to the emerging markets of golfers in places like Asia as a way of introducing more golfers to the world’s fine golf courses that are preparing to welcome them.  The proliferation of smart phones over the past several years has now reached a critical threshold. The iPhone, the Android, the iPad are as sure to be in a golfer’s luggage as his putter.

Don believes in the important role that golf plays in the lives of so many people.  Fathers and sons, old friends, and business colleagues are drawn closer to one another by the game.  He sees his Movie-Apps playing an important role as new generations of golfers access the great golf courses of the world with World Golf Movies guidance in the palm of their hand.

World Golf Movies produces each movie-App  at no cost to the individual golf course. Filming takes no longer than one day and can usually be accomplished in four hours. All that is required of the golf course is that the cinematographer be the first out on the course in the morning, and last out in the late afternoon. Two weeks after filming, the completed Movie-App goes up for sale in the iTunes store and the golf course begins earning revenue, both from direct sales via iTunes and from displaying a link to their Movie-App on the home page of their website.

If anyone can make a concept like this succeed, Don Snyder can.  He is the boots on the ground for World Golf Movies, but he also has had a long and celebrated career as an author. He spent thirty five years writing critically acclaimed books for the most respected publishers in New York, and movies for the best producers in Hollywood.  You may have seen him on Oprah or watched his Hallmark Hall Of Fame movie, “Fallen Angel,” which plays around the world every Christmas and stars Gary Sinise. Don wrote most of that movie script while living one winter in the Rusacks Hotel overlooking the 18th fairway of  The Old Course and playing the course fifty-seven times.  In the spring of 2013, Don’s latest book, Walking With Jack, will be published by Doubleday.  It chronicles his journey in golf with his son, culminating in their experiences on the Adams Golf Tour when father caddied for son this past winter.  Don would love to hear from golfers who want to share their thoughts about World Golf Movies. He can be reached at hancockpt@aol.com.