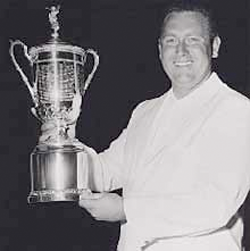 Billy Casper, whose previous best Open finish was 14th place at Oak Hill in 1956, had been suffering through a luckless season when he set off to compete in the 1959 U.S. Open at Winged Foot Golf Club.

He arrived a week early and dropped his bags in the private home of a Navy buddy, Dr. Joseph Bloom, who had an oral surgery practice in Elizabeth, N.J. When he returned there after spending his first day at the course, Casper spoke enthusiastically about his chances, despite the poor showing so far that year.

“I said to him, ‘Joe, if ever I win an Open this is going to be my chance. These Winged Foot greens remind me of my home course, San Diego Country Club—they feel very familiar.’” It was on the drive down to New Jersey the next day that Casper made his decision about how to tackle No. 3. When the rest of field turned out for their practice rounds, he played the hole conventionally. “I went for the green during the regular practice rounds because I thought I might change my mind. And when I did, sure enough, I was making as many double-bogeys as pars,” he relates. “Laying up I knew I could never do worse than a four.”

Casper was putting with a Golfcraft mallet putter that he had never used before and would never use again. Wielding that birdie-packed club, which after the championship would go on display in the USGA’s museum, the Californian suffered just one three-putt green out of 72, and averaged seven one-putt greens per round.

Casper’s putting was uncanny that week, even by his own elevated standards. Frank Stranahan, who had missed the cut by five strokes, came out on Sunday morning with the intention of following Hogan through the final 18. He fell into stride with Casper down the first fairway expecting to veer off after a hole or two. “While he was walking with me,” says Casper, “I one-putted the first five greens of the last round. Strannie never did make it out to find Hogan—he stuck with me the whole way around!”

What Stranahan saw down the stretch was some scrambling golf that allowed Casper to nurse his lean and avoid serious mishap. A telling sequence of shots came at the par-4 11th, where Casper drove into the rough, hit his approach into a stand of trees but managed to pitch from there over a bunker to within a foot of the hole. Billy’s 38 on the final nine was a case of indifferent ballstriking on the part of a player who was putting so well as to not particularly mind where the drives and approaches were landing.

Those five consecutive one-putts to start round four are impressive enough, but what is truly stunning is that Casper had one-putted the final four greens of his third round the previous afternoon. Nine one-putts in a row in any situation is freakishly rare; in major-championship golf this surely must be the only instance of it.

Over his career, Casper won 51 pro tournaments (including another U.S. Open—the famous playoff victory over Arnold Palmer at the Olympic Club in 1966) and six Vardon Trophies along the way. Over a six-year period spanning 1965-70, when golf’s beloved Big Three of Palmer, Jack Nicklaus and Gary Player were combining for a total of 35 victories, Casper won 23 tournaments on his own.

On record alone, he ought to be held in higher esteem and his achievements more widely celebrated. But if Billy Casper isn’t talked about in grill rooms and golf shops to the extent he should be, he can rest assured there is one par-3 hole in Mamaroneck, N.Y., where his legend will always be celebrated.