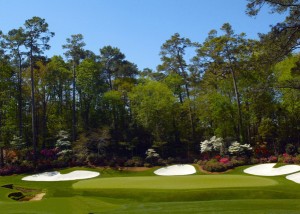 I first posted this a year ago when this blog was just getting started. It all still holds true.

The first Masters I covered was in 1980 when Seve Ballesteros won the first of two green jackets. It’s hard to believe it was 30 years ago.

Actually, it wasn’t just the callowness of youth. The Masters really did change enormously from 1950 to 1980, whereas the Masters of 1980 is the same in its essentials as the tournament of today.

In 1950, Augusta National was finally getting to the point of filling its membership rolls, a long struggle that began with the club’s opening in 1932 during the depth of the Depression. Tickets for the Masters were available at the gate. On Wednesday afternoon of tournament week there was a long-drive contest and trick-shot exhibition. There was no television coverage.

By 1980, Augusta National was one of the most exclusive clubs in the world, where you could become a member by invitation only. Masters tickets were impossible to obtain (except on the black market) because they were sent out only to past ticket-holders, and you couldn’t even get on a waiting list because it had been closed. On Wednesday afternoon, there was the Par 3 Contest. The tournament had long been a television staple, drawing the highest ratings for a golf tournament all year. All of this is basically the same today.

Some reflections on the Masters circa 1980 compared to today:

Greens
The greens consisted of Bermuda grass in 1980, but that was the last year before conversion to bentgrass. It was somewhat of a controversial move. Bentgrass, while providing a much smoother putter surface, also meant that the greens were faster. Combined with the severe slopes of Augusta’s greens, that made putting very treacherous. Scoring rose. The winning score in the last seven years of Bermuda was 276.1; in the first seven years of bentgrass it was 281.0.

Course Length
In 1980, the course was listed at 6,905 yards. Officially, it stayed that way until 1999. But that was a more secretive era when the club would sometimes make changes without either telling anyone or changing the scorecard. One year in the early 1980s, they moved the first tee back 10 yards without informing anybody. The players only realized it when their drives in practice rounds were landing in the fairway bunker on the right side that they used to fly their drives over.
By the late 1990s, the distance explosion had started on the PGA Tour, and players were hitting short irons—often wedges—to nearly all the par fours. From 1999 to 2006, all but four holes were lengthened, resulting in a 7,445 yard course (now 7,435 yards, with 10 yards knocked off the first hole in 2009).
In truth, the players are hitting about the same irons into greens now as they did in 1980. The exception is the seventh hole, a short, tight par four in 1980 that now plays 80 yards longer at 450.

Second Cut
One of the most striking things about the course in 1980 was that there was essentially no rough. Well, you could barely see that there was a delineation of fairway, but the grass outside of that line was so short it looked like fairway grass that you might find on another course. The club calls this the “second cut” of fairway. In 1999, that second cut was increased to 1-3/8 inches, essentially short rough. Now players have to worry about controlling their distance from the rough (though I remember Jerry Pate complaining about flyers from the really short second cut when he missed a playoff by one shot in 1983), but missing the fairway is still less of a penalty at Augusta than other courses.

Trees
Augusta National, once a tree nursery, has always been known for its tall, stately pines. Starting in 1999, the corridors became narrower on several holes with the planting of new trees, a development that many pointed out was counter to the original philosophy by designers Alister MacKenzie and Bobby Jones. Some of the trees on the 11th hole, which had its character changed the most, have since been removed.

Playing Styles
The classic Augusta players of the early 1980s were Ballesteros and Tom Watson, who hit the ball long (but not necessarily straight) and had a great touch on and around the greens. That formula still works—the 2000s saw Tiger Woods and Phil Mickelson in the Ballesteros-Watson roles. Accurate players may have a better chance now due to the narrower corridors and fairway bunkers that are in play for long hitters with the tees moved back. I’m not sure it’s changed that much, though. Long hitters still have the advantage on the par fives and hitting higher shots into the greens. If a new Seve came along tomorrow, he would still be a favorite at Augusta.

Course Difficulty
There has been concern raised in recent years that with all of the changes making the course play harder in one way or another, players were forced to become too defensive and the tournament was not as exciting. Weather was a big factor in a couple of years, so the case was probably overstated. And frankly, the tournaments in the early 80s weren’t all barn-burners, either, people just tend to remember the thrilling ones more. If the balance did swing a bit too far toward difficulty in the Hootie Johnson years, there are signed that the current leadership is bringing things back the other way.

Course Condition
In 1980, the course was already known for its immaculate condition, looking like a green carpet. Nothing has changed.

Leadership
I missed the Clifford Roberts era by three years (Bobby Jones had died nine years before). I was perfectly happy that I hadn’t been at the Chronicle in 1977 on the day that Clifford Roberts committed suicide on the grounds of Augusta National—you can imagine what a tough day that was to be working for the local newspaper.

Merchandise
One reason the club has no need for corporate support is the mint it makes from sales of Augusta-logoed merchandise. This has grown by leaps and bounds since 1980. It’s my recollection that merchandise was sold only in the pro shop in the early 1980s. Sometime later in the 1980s, a huge merchandise building was constructed. It’s so popular that there’s often a line to even enter.

Par 3 Contest
The Par 3 course was built in 1958 and the Par 3 Contest began as a Wednesday afternoon feature in 1960. This was already a highly popular event for spectators by the early 1980s; they jammed the little course in such numbers that it was expanded to provide more room. Still, more and more people came. With Masters tickets impossible to get, practice round tickets—especially on Wednesday—were the next best thing. With no limit on the number of tickets, things began to get out of hand—interminable lines for rest rooms and food, etc. Finally, the club decided to limit the ticket allotment for practice rounds, distributing them through an annual lottery.

Practice Facility
In 1980, players were starting to outgrow the practice range in front of the clubhouse, with the longest hitters bouncing their drives onto Washington Road. A net fence was put up in the early 1980s, and the increase in driving distance on tour could be traced by the increasing height that it was necessary to make the net. Finally, in 2010, a new practice facility was built in the area that was formerly used for parking. This range is 400 yards long, so it should be good for quite a while.

Parking
Over the last decade or so, the club bought out a lot of property, including homes, on Berckmanns Road, which runs past the side of the club. The homes were torn down to make a new, larger parking area. Spectators now enter from Berckmanns Road instead of Washington Road at the front of the club, and not as many of them have to scramble to find other parking (the old lot filled up quickly).

Press Parking
In those days, for me, it was a case of the penthouse or the outhouse. The Chronicle got a limited number of parking passes in a special area that was yards away from the press building. But if I didn’t get one of those, I had to pay to park in the shopping center across the street. In 2010, with the opening of the practice facility, press parking moved across Berckmanns Road, necessitating a shuttle to get to the media center.

Press Facility
In 1980, the press was housed in a Quonset hut building that was erected in 1953, replacing what was literally a tent. A few oldtimers were still pounding on typewriters that were available for use, but most had recently made the transition to portable computers (the ones made by Radio Shack were the most common in press rooms of the early 1980s).
A new, larger press building went up in 1990. It has been constantly updated to the point that now you can stay in your seat with headphones and your own special computer screen and listen in on interviews in the interview area, watch action on the course, find tournament stats, etc.

Outside The Gates
By 1980, Washington Road had already developed into the strip of restaurants, stores, strip malls, shopping centers, and gas stations that it is now. This must have happened during the 1950s and 1960s with the coming of the interstate highway and fast-food chains. Augusta National had just the luck to be located on what became the main road out of town to I-20, in the direction that Augusta was growing fastest. Living in Augusta, you drove past Augusta National all the time. So, it was nice to get inside the gates for one week a year.

Anticipation
Augusta’s spring date, combined with the tournament’s tradition and the importance of winning a green jacket (a ceremony that started in 1949, by the way) to a player’s career, made the Masters the most anticipated tournament of the year in 1980—and in 2011, too (update).

Read all our stories on golf’s season-opening major as TheAPosition.com covers The Masters.