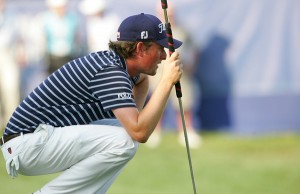 First, Adam Scott won the WGC-Bridgestone Invitational with a long putter. Then Keegan Bradley won the PGA Championship with a belly putter, becoming the first to win a major using a long-putter stroke. Now Webb Simpson has extended the winning streak for long/belly putters to three straight weeks by taking the Wyndham Championship.

It’s the latter two who might signal a more significant shift—Bradley and Simpson are young players who came to the Tour already employing the belly putter. Previously seen as the choice of last resort for those struggling on the greens, like Scott, or as a concession to age on the Champions Tour, this may be a sign of long and belly putters gaining wider acceptance.

The long putter has been around for more than 25 years and the belly putter for 12. Still, they aren’t all that common on the pro Tours and are even less so among average golfers.

That we don’t see more of them wielded by weekend golfers around the country may be a chicken-and-egg situation. At most pro shops or golf stores, you won’t find many long putters or belly putters for sale. Demand just isn’t that high, but then again the average player has never really had a chance to try the long putter. People still learn to play conventionally, and for the most part don’t think about changing.

You see more belly and long putters on the Tours because players’ livelihoods depend on how well they putt, and they are more likely to experiment to find something that will optimize their income-making possibilities. They are also in an environment where more things are available to try.

We haven’t reach the point—some would say the apocalypse—where many youngsters are learning to putt with a long putter (though, in fact, if the kid is little enough, a regular putter can be like a belly). Simpson switched in his freshman year at Wake Forest; Bradley shortly after he finished at St. John’s and as he was embarking on the mini-tours.

“Personally, I think it’s an easier way to putt,” Bradley said after the PGA.

Better be careful there. That could be ammunition for those who would like to see long putters outlawed. And with more and more players having success with them, the question is bound to come up again for the game’s ruling bodies.

Peter Kostis inferred that he would like to see long putters banned when he talked on the CBS telecast about Sam Snead’s croquet putting style being ruled illegal in the 1960s. But that analogy doesn’t really work. The USGA outlawed Snead’s style soon after its introduction (he switched to “side-saddle” when a stance straddling the ball was banned). Long putters have been around for a quarter of a century, so it will be tough to put that genie back into the bottle.

For the record, I would like to have seen long putters banned when the matter came up in the mid-1980s, because the stroke is so non-traditional. However, I can’t see how it could be justified this late in the game. They’ve been OK to use all this time, and now suddenly they’re not OK when more people are using them and having success?

I’d still like to see it made illegal to rest the club against any part of the body during the stroke. That’s been happening for quite a while, too, but it’s easier to make the case that using the body gives a player an advantage, as opposed to just saying a putter is too long or the stroke too non-traditional.

While we might have reached a tipping point for long and belly putters to become much more common on the Tours and on courses across the country, I don’t think it will tip so far to make them the standard putter. A conventional stroke offers more feel and is more similar to the swing used in the rest of the game.

And I don’t think that everyone will putt better with a long or belly putter. If that were the case, we would have seen more of them on Tour. Sure, there’s always been a bit of a stigma to it—but players would be willing to put up with a stigma if it would improve their performance.

That said, the stigma might have kept some who were on the fence from jumping to the long putter, so its usage will probably rise. Having more players win with it could create a bandwagon effect—much the same way that if one NFL team has success with a certain kind of defense, the next year you see six other teams playing that defense. And more college players will probably start noodling around with it in light of what Bradley and Simpson are doing.

Is it the end of the world? No. But it’s a world where the landscape has changed.