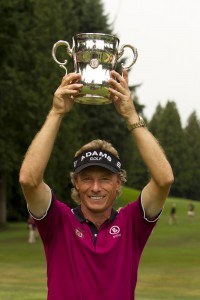 First, Langer held off Corey Pavin in a head-to-head duel at the Senior British Open at Carnoustie. A week later, in the U.S. Senior Open at Sahalee near Seattle, Langer found himself in another duel with an American in the final group. This time, it was Fred Couples, who had 30,000 of his hometown fans rooting him on. Langer’s support was limited practically to his son, Stefan, who was his caddie.

Langer and Couples began the final day tied, but while Freddie chunked a wedge into the water and made a triple bogey on the second hole, Bernhard was relentless. He didn’t make a bogey all day, shot a 67 to Couples’ 70, and won by three strokes.

Langer was just the man for the job of beating Couples on his home turf, having captained the 2004 Ryder Cup team to victory on U.S. soil after playing on the only other two European teams to win the event when it was played in the U.S. (1987 and 1995). Langer was on another European team that nearly held onto the Cup at Kiawah Island, but he missed a six-foot putt on the final green as the last player on the course. Showing his unflappable nature, he flew across the Atlantic and won a European Tour event the very next week.

That was a case of bouncing back from failure, but it can also be difficult to follow up on a major championship victory. A major champion is often either completed drained or still floating and unable to concentrate if he tees it up the next week. But Langer has a history there, too. A week after winning the 1985 Masters, he captured the Heritage Classic. This time there was a trans-Atlantic and then a cross-country flight instead of a short drive across South Carolina, but Langer was able to maintain his focus.

This was the fifth time since the Senior British Open became an official Champions Tour event (and an official major) in 2003 that it has been held the week before the U.S. Senior Open—a scheduling dilemma that the R&A and USGA can’t seem to quite work out—but the first of those times that the U.S. Senior Open was on the West Coast. It didn’t faze Langer as he became the first to win both the U.S. and British Senior Opens in a career, let alone in a single year, since the British became an official event. Gary Player did sweep the two titles in 1988 and won three British and two U.S. titles.

Langer’s win over Couples may prove to be the determining factor in Player of the Year honors. The victory enabled Langer to pass Couples and move to No. 1 on the money list. It also gave him two majors, while Couples has had to settle for a pair of major runner-up finishes (the other to Tom Lehman at the Senior PGA Championship). Couples’ only hope is that there are still two senior majors remaining.

There was Freddie Fever at the beginning of the year when he won three straight tournaments, and more of it when he returned home to Seattle. But as much life as Couples has brought to the Champions Tour in 2010, it may turn out to be the year of the quiet German, at least in the big events.

Meanwhile, on the LPGA Tour there was another unprecedented feat: Taiwan’s Yani Tseng became the first player to own three majors at the age of 21. Having taken the LPGA Championship as a 19-year-old rookie in 2008, Tseng has added the Kraft Nabisco Championship and now the Women’s British Open this year.

The previous youngest triple major winner was Se Ri Pak, who collected her third at age 23 (she won the first two at age 20). Mickey Wright won her third at 24 and Betsy Rawls and Karrie Webb at 25.

Tseng has won only four tournaments, but she has shown a knack for the big occasion and now needs only the U.S. Women’s Open for the career Grand Slam. She has only, oh, a couple of decades to accomplish it. Then again, it’s a title that eluded the LPGA’s winningest player of all time, Kathy Whitworth.

On the PGA Tour, Stuart Appleby merely shot a 59 in the final round to win by one stroke at the Greenbrier Classic—not an unprecedented feat! David Duval did exactly that to win the Bob Hope Chrysler Classic in 1999. Nor was it the first 59 shot this year—Paul Goydos did it at the John Deere Classic three weeks earlier.

There were also 60s shot in the last month by Steve Stricker at the John Deere, Carl Petterson at the RBC Canadian Open, and J.B. Holmes at Greenbrier. What’s up with the low scores? It’s probably more of a coincidence than a trend. At the John Deere and the Canadian, the greens were softer than usual.

At the Greenbrier Classic, well, that course was probably not challenging enough. It’s a resort course in the old-fashioned sense of the word, that is, it’s designed not to beat up its guests (as opposed to some modern resorts, where the idea seems to be to create something memorable, even if it’s memorable because of its difficulty).

There are three courses at The Greenbrier, and some were surprised when the Old White Course was selected as the site for the new PGA Tour event instead of The Greenbrier Course, which hosted the Ryder Cup in 1979. The Greenbrier was redesigned by Jack Nicklaus in the 1970s, but there have been a lot of developments on the PGA Tour since then so that course would hardly have been a backbreaker either. (Before the Nicklaus redesign, Sam Snead shot a 59 at the Greenbrier in 1959. It happened in what the PGA Tour called an unofficial event, so it didn’t count as the Tour record, but that didn’t stop Snead from saying he was the first to break 60 on the Tour.)

Old White at least has a classic pedigree, having been designed in 1914 by Charles Blair Macdonald, who was also responsible for National Golf Links and several other of the early great courses in American golf. And it was restored a few years ago by Lester George.

The restoration wasn’t done with Tour pros in mind, though, as the Greenbrier Classic came about only after the recent purchase of The Greenbrier by Jim Justice. While it can be fun to see the pros make a lot of birdies, there also should be some challenge, and Old White seemed to come up short in that department—not necessarily in length at 7,020 yards but in creating the kind of difficulties that would bring bogeys into the picture.

The greens in regulation stats told the story: Appleby hit 59 of 72 greens and ranked only T40th in the field. Charles Howell III and Briny Baird led by hitting 66 of 72 greens, a number rarely approached on Tour, where the holes are located pretty close to the edge and putting from the fringe counts as a missed green.

Howell, who hit 17, 18, 16, and 15 greens in the four rounds, didn’t make a single bogey all week though he managed to finish only T9th (Baird was T21st). Going 72 holes without a bogey is extremely rare: The last winner to do so was Lee Trevino way back in 1974 at New Orleans, while the last player to do it without winning was Bubba Watson in 2006 at Tucson.

Still, it was dramatic to see Appleby, who had eight straight 3s in shooting a front-nine 28, birdie the last three holes to break the 60 barrier and post a 258 total that held up to beat Jeff Overton by one.

The 59 was the fifth shot on the PGA Tour (joining Al Geiberger, Chip Beck, Duval, and Goydos). Appleby also tied a PGA Tour mark for the low score for two consecutive rounds at 124, sharing it with Mark Calcavecchia, who did it at Phoenix.

Appleby did become the first to shoot a 124 total in the last two rounds of a tournament—that was his unprecedented feat.