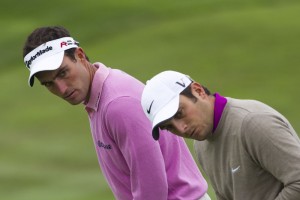 The five candidates for the three captain’s picks for the European Ryder Cup team had cases that were so close to being equal that Colin Montgomerie could just as well have thrown darts to determine his selections. No matter which trio he picked, he couldn’t really lose—he would have been getting three very good players in any case. But he also couldn’t really win—he was guaranteed to leave off two players who had strong arguments for making the team.

There were so many factors involved that it almost had to come down to a gut feeling. Yet if you look at the numbers, Monty might have made his decision by considering only a single factor. It’s probably a coincidence rather than a conscious decision, but Montgomerie ended up picking the three players highest on the world ranking points qualification list outside the top four who automatically made the team.

This is not the same as the world ranking, where Paul Casey entered the week ninth, the highest-ranked of the five candidates. The world ranking is based on the past two years, but the world ranking points category for the European Ryder Cup team is based only on the previous 52 weeks. Every week is treated equally rather than giving greater weight to recent performance.

A couple of weeks ago, it looked like the perfect scenario might unfold for Montgomerie, with Casey clinging to the final automatic spot on the European points list and Harrington, Donald, and Rose the likely captain’s picks. (Those four all stayed in the U.S. for the FedExCup rather than playing in the European Tour’s two qualifying events.) Things changed significantly in the last two weeks. First, Peter Hanson won the Czech Open, knocking Casey out. Then on Sunday, Edoardo Molinari won the Johnnie Walker Championship at Gleneagles.

Edoardo Molinari had been mentioned as an outside possibility for a pick, partly because of the prospect of pairing him with his brother Francesco (they won the World Cup together last December) and partly because he was having a very good year. That turned into a great year when Edoardo won at Gleneagles, his second victory in the last month-and-a-half. He ended up missing automatic qualification by one spot on both lists. With an extremely hot hand and the simpatico pairing with his brother, Edoardo jumped from an outside possibility to the head of the class among the captain’s pick candidates.

So, it came down to four-for-two-spots between Harrington, Donald, Casey, and Rose. I figured going into the week that Rose was the odd man out. Yes, he won twice on the PGA Tour early in the summer, but he had missed the cut in the British Open and PGA Championship, so the hot-player argument no longer applied. And as his world-ranking points standing suggests, he hasn’t played all that well in the past year except for those two wins and a second.

I figured Harrington as the most likely choice, thanks to the three major championship titles on his resume, the Ryder Cup experience, a personality that makes him a good teammate, and reasonably good form (as his world ranking points standing suggests).

So it probably came down to Casey or Donald—ninth and 10th in the world ranking, respectively, heading into the week. Both have good Ryder Cup records, Casey at 3-2-4 in three Cups and Donald 5-1-1 in two (a wrist injury having essentially prevented him from making the team in 2008). Casey is a long hitter and a good four-ball partner (1-0-3). But the steady Donald is even better as a foursomes (alternate shot) partner. He’s 4-0 in the Ryder Cup in that format, and that’s probably what clinched his spot.

Two more things in Donald’s favor: He has a victory this year (Madrid Masters) and Casey doesn’t, and he finished third at Celtic Manor, the Ryder Cup site, at the Wales Open in June. Casey’s year hasn’t been anything special other than a tie for third at the British Open, and even there he didn’t make a positive impression in the final round when he went backwards instead of putting pressure on winner Louis Oosthuizen.

The bottom line: Though my first inclination would have been to go with Casey, I ended up agreeing with Monty’s picks.

I don’t agree with Europe’s qualification procedure, however. After the U.S. wisely raised its number of captain’s picks from two to four in 2008, Europe should have done the same in 2010 but instead stopped at three. With many of its top players spending a lot of time in the U.S. on the PGA Tour, it needs even more flexibility but has given its captain less. The European Tour seems more interested in trying to persuade its players to compete more in Europe than in fielding its strongest team.

Sweden’s Hanson is a solid player and I’m not saying he will hurt the team. Well, maybe I am in the sense that it would be a stronger team with Casey than with Hanson.

It’s a testament to European depth—but not its selection system—that it left off a player ranked eighth in the world (Casey, who moved up a spot after Sunday’s results) and another who won twice this year on the PGA Tour (Rose). It’s a testament to the strength of the European Tour that of the four players who made the team on world ranking points—the list is supposed to help Europeans who play more in the U.S.—two of them (Lee Westwood and Martin Kaymer) are not PGA Tour members and a third (Graeme McDowell) did not join the PGA Tour until after winning the U.S. Open in June. (The fourth player is Rory McIlroy.)

European depth ended up giving Montgomerie a headache with his picks, but it could have been even harder. What if Sergio Garcia hadn’t gone into a funk in 2010 and had been one of the captain’s pick candidates? Montgomerie made a good move there, too, on Sunday when he named Garcia as an additional vice captain.

All in all, it was a good day for Monty—at least the way it looks now. Of course, if either Casey or Rose wins any of the final three FedExCup events, or if Donald, Edoardo Molinari, or Harrington stink it up at the Ryder Cup and Europe loses, Montgomerie will be second-guessed. But that’s part of the deal for a Ryder Cup captain in this day and age.

It seems that there’s a lot being written about Paul Casey being punished, as it were, for not caring enough about the Ryder Cup to come back and play in the final qualifying event instead of competing in the FedExCup in the U.S. (to some observers in Europe, the punishment is a good thing).

I’m not sure that’s the case. Padraig Harrington, Luke Donald, and Justin Rose also elected to play in the FedExCup. If anyone abandoned the European Tour more than anyone of that foursome this year, it’s Harrington, who played in only two European Tour events (other than the major championships and WGC events). Casey played in five (albeit three of them were in the Middle East).

I think Harrington was picked over Casey for one simple reason–he has won three major championships to none for Casey. That counts for something in captain’s picks, which aren’t only about current form. Current form can be overrated for a Ryder Cup, considering that the Cup is a month away when the picks are made. Anyway, as noted, Harrington accumulated more world ranking points than Casey over the last 12 months.