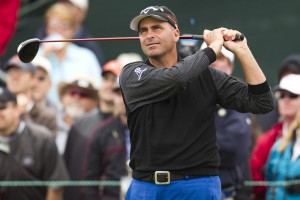 What transpired on the 17th hole at CordeValle in the Frys.com Classic on Sunday was one of the most dramatic—and unlikely—turnarounds ever on the PGA Tour.

Rocco Mediate and Bo Van Pelt were tied for the lead. Van Pelt drove the green on the short par four, playing at 288 yards that day, his ball coming to rest 19 feet, 10 inches from the hole. The shorter-hitting Mediate laid up on the water-guarded hole, leaving himself a second shot of 116 yards.

At this point, it looked like Mediate would end up either one or two strokes behind or tied at the end of the hole. Instead, Mediate holed his shot from the fairway for an eagle and Van Pelt three-putted for a par, and Rocco strode to the 18th tee with a two-stroke lead.

How unlikely was that? I have used some of the PGA Tour’s detailed ShotLink data to figure out that there was about a 1 in 37,000 chance of that combination of events.

The PGA Tour has data on approach shots from 100 to 125 yards, and on putts from 15 to 20 and 20 to 25 feet. I analyzed this data to come up with probabilities for Mediate and Van Pelt in this situation.

Coming into last week, there had been 33 shots holed out in the 100-to-125 yard range out of a total of about 26,000 shots this year. About 20,000 of those shots were from the fairway. The hole-outs are not broken down into fairway and rough shots, but let’s assume that they occur with greater frequency from the fairway. With an estimate of 30 holed fairway shots out of 20,000, that’s a 1-in-667 chance, or 0.15 percent.

To find the probability of both happening, you multiply the chances of each one, resulting in an approximately 1-in-37,000 (rounding it off because the probabilities are estimated rather than exact), or 0.0027 percent.

I came up with these estimated probabilities for Mediate and Van Pelt:

(This reflects the PGA Tour ShotLink for a 20 percent birdie rate on fairway approach shots from 125 yards, and a result relative to par of .14-under. Incidentally, ShotLink data shows the pros are not as accurate from 100 to 125 yards as we might think. The average approach shot from there ends up 20 feet from the hole, and even the Tour leader—Scott Verplank—averages 15 feet, 5 inches.)

Mediate, because he intended to fly his approach shot past the hole with backspin, asked Prugh to mark his ball, just in case. Meanwhile, Golf Channel announcer Peter Oosterhuis virtually called the shot. “OK, Rocco,” he said as Mediate prepared to hit his approach, “the other two have driven the green. Now you can hole your second shot.”

Speaking of improbabilities, Mediate’s hole-out was his fourth of the week, one each day. He made a hole-in-one from 191 yards on Thursday, holed out from 160 yards for an eagle on Friday, and from 110 yards for another eagle on Saturday. But it didn’t look like he would be able to perform such heroics on Sunday. His game was apparently thrown off by the chilly, damp weather, the pressure of playing with the lead as he tried to close out his first victory since 2002, or both, and he was 5-over par through 15 holes before a birdie at the 16th got him to 4-over for the day and a tie for the lead.

Sunday’s drama didn’t end on the 17th hole. At the par-four 18th, all three players hit the green in regulation. Mediate, playing first, knocked his first putt 4 feet, 3 inches past the hole. Van Pelt proceeded to hole his 38-foot putt for a birdie, and Prugh knocked in a birdie from 10 feet, 7 inches. Now Mediate had to sink his knee-knocker for a one-stroke victory—and he made it.

Perhaps it was karma for Mediate after he came so close to beating Tiger Woods in the dramatic 2008 U.S. Open playoff down the California coast at Torrey Pines. Mediate, now 47 years old, had struggled mightily since then, and it appeared that his effort against Tiger would be his last hurrah.

Given the importance of the event and the identity of his opponent, Mediate will still be most remembered for taking Woods to the wire at that U.S. Open. But, while not seen by nearly as many, Mediate’s exploits at the Frys.com were just as unforgettable, and (at least at the 17th hole) even more unlikely.