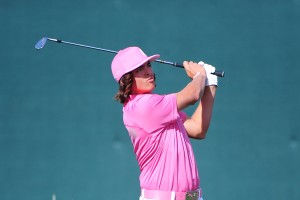 Rickie Fowler might have toiled on the Nationwide Tour last year if a proposed PGA Tour change had been in effect. Copyright Icon SMI.

Doug Ferguson of the Associated Press reported earlier this week on a plan by the PGA Tour to revamp its fall schedule by turning Fall Finish events into three merged PGA-Nationwide Tour tournaments (he followed up with this story). The field for the new events would consist of 50 to 75 players who missed the top 125 on the PGA Tour and the top 50 to 75 players from the Nationwide Tour, with Tour cards for the following year granted based on combined performance in the new fall tournaments.

There is a lot to like about the plan, but there are a few devils in the details. First, the positives:

It adds spice to the PGA Tour’s post-FedExCup season, which has been languishing with a Fall Finish that has received little attention. I actually never had a problem with the PGA Tour season ending with a whimper. Golf is never going to have a big impact in the fall, but as long as sponsors are willing to put up purses for fall events I see no reason the pros shouldn’t have the opportunity to earn that extra opportunity to compete even if the whole world isn’t watching.

If you go back before the start of the Tour Championship in 1986, that’s the way the Tour always finished. With the arrival of the FedExCup in 2007 and the move of the Tour Championship to September, it created that situation again. It doesn’t seem to have gone over as well in this day and age. The Fall Finish started out with seven events, but is down to four.

Using these tournaments as a qualifier for the following year’s Tour adds intrigue and importance. That presumably means more interest from golf fans and media, making it a better show for television (the Golf Channel) and more likely to attract sponsors. I like the concept.

It is perhaps the Nationwide Tour side of things that is driving this. Or I should say the developmental Tour, since Nationwide has already said it will drop sponsorship after 2012. This change could be a boost in the search for a new sponsor. The secondary Tour has been a going entity since 1990 (it’s been called the Hogan Tour, Nike Tour, buy.com Tour, and Nationwide Tour). It’s a franchise the Tour doesn’t want to lose, especially since it has come to play an important role in feeding players onto the main Tour.

Now for the question marks and negatives:

This isn’t a complete win-win for the Fall Finish events. Their fields were dotted with the occasional name player and a fairly healthy number of exempt players. Now they wouldn’t have anybody who finished in the top 125.

As for the developmental Tour, over the years the Tour has gradually increased the number of cards given to its top finishers while reducing the number from Q-School (it’s now 25 from each). The rationale is that players who have performed well over an entire season deserve to be rewarded.

While this new plan would keep the Nationwide Tour connection as a feeder for the main Tour, it actually goes away from the idea of rewarding season-long success. Now it all comes down to performance in a three-week period. A player could finish high on the secondary Tour money list, but still miss his PGA Tour card.

Now, about Q-School. There still would be a Q-School, but instead of going directly to the PGA Tour the qualifiers would only proceed to the developmental tour for the following year. They would be stuck there for the year almost no matter how well they performed. (The only paths of advancement being earning enough money in a limited amount of PGA Tour events via sponsor exemptions or winning three times on the secondary Tour to earn an immediate promotion.)

This cuts off an avenue for ultra-talented young players coming out of college like Rickie Fowler, who made the Ryder Cup team as a rookie in 2010. Ferguson wrote that Tour officials consider such players exceptions. That misses the point. They are exceptions because they are exceptional players—good enough to compete right away on Tour and, in many cases, draw fans.

On the other side of the spectrum, the Q-School change would also cut off immediate access to the PGA Tour for long-shot dreamers, the Tin Cups of the world hoping to make the big time. Now they would have to prove themselves on the secondary Tour by finishing high enough for the year in order to make the three-event qualifier for the succeeding year. This aspect might improve the quality of the fields and weed out players with little chance of success on the main Tour. But it would also make the Tour more like a closed shop, with easier access to those already on the inside.

Is there any reason that all of the Tour cards for the succeeding season have to come from the new three-tournament fall series? I don’t think so. You could give cards to the top 10 on the season-long developmental Tour list, the top 30 from the new three-event qualifier, and the top 10 from Q-School. Those numbers could be jiggled, but the point is you could still have the new events the Tour is proposing without completely cutting off other access to the main Tour.