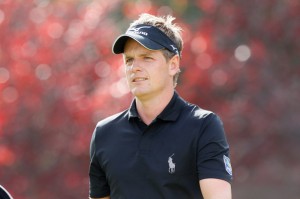 Luke Donald's playoff chip shot might have found the cup if the flagstick had been in the hole. Copyright Icon SMI.

A number of years ago, Dave Pelz researched whether leaving the flagstick in or taking it out gives you a better chance of holing a shot from the fringe. The results of his extensive investigation, published in Golf Magazine, showed that it was better to leave the flagstick in.

It should have been the definitive end to an age-old golf argument, but unfortunately it was forgotten all too soon. Luke Donald, for one, would have been better off knowing about Pelz’s research.

Donald needed to hole a chip shot from about 18 feet to remain alive in a playoff against Brandt Snedeker at the Heritage on Sunday. He left the flagstick out, hit the chip straight but too hard, and watched the ball hit the back of the hole and fail to drop. That was the end of the playoff and of Donald’s bid to reach No. 1 in the world, at least for this week.

Among better players, there almost seems to be a stigma attached to leaving the flagstick in, or a point of pride about taking it out. I think it’s somewhat of an ego thing, with the message being, “I’m a pro [or low-handicapper], and I’m not worried about hitting this shot too hard.” These players will also tell you that you have a better chance of holing the shot if you leave the flag out—but they’re wrong.

Frankly, to me, the research backs up common sense. Clearly a fast-moving ball will be stopped more readily by an object like a flagstick than it will by a hole backed only by a ground-level lip. And if the ball is going so fast that it bounces off the flagstick and doesn’t drop into the hole, chances are that it wouldn’t have fallen into the hole without the flagstick.

Of course, flag in or out doesn’t matter for a ball that is moving slowly when it reaches the hole. But Donald was in a situation where he had to hole the shot, which means he wasn’t going to leave it short. That prompted him to give the shot more oomph than he otherwise might have—and should have prompted him to put the flagstick in the hole.

The decision might have been influenced by the fact that Snedeker putted before Donald chipped, and the flagstick was already out of the hole. Leaving the flagstick out was thus the default position, a conscious decision would have been needed to put it back. The fact that the chip was so short also made flagstick-out the default position for a pro—even more so for Donald since he has perhaps the best short game on Tour.

Despite failing to chip in, Donald’s play down the stretch showed that his reputation for having a great short game is fully deserved, while his reputation for being a great iron player is not so much so. On his last five holes (two in regulation, three in the playoff), Donald hit only one green but got up and down three times—twice when he needed to do so to remain alive. Only a fried-egg lie in a bunker derailed him.

Donald’s green-hitting woes down the stretch derived partly from club selection, although failure to make pure contact was also probably a factor in coming up short three times. The 2011 PGA Tour Shot Link stats show that Donald is great on iron shots inside 125 yards—wedges—but nothing special in either greens in regulation or proximity to the hole outside that distance. He ranks 141st in greens in regulation overall, which can’t entirely be explained away by playing a tougher-than-average schedule.

Around and on the greens, Donald has been sublime, which explains why he has been in the top 10 in five of his six starts, with a win, a second, and a T4 at the Masters. He’s second in scrambling, first in putts per GIR, and fifth in total putting, which measures how many putts he converts from various distances.

Sunday’s winner, Snedeker, is also one of the Tour’s best putters, ranking second to Donald on putts per GIR and fourth in total putting. He practically mirrors Donald in his ranking of 138th in hitting greens. But what was most noteworthy about his final-round 64 that enabled him to come from six strokes behind is how little scrambling he had to do. He hit 15 greens in regulation in the final round at a course featuring the smallest greens on Tour.

That was quite a turnaround from hitting only nine greens in a one-over 72 on Saturday, including two of the last eight. Snedeker had been playing well in recent weeks (T15 at the Masters, 4th at the Valero Texas Open) and a tip from his teacher, Todd Anderson, got him back on track for the final round.

Of course, great putting helped, too. Snedeker made seven birdie putts of between 9 and 16 feet, adding a 29-foot bomb and a two-putt on a par five for nine birdies in all. Even with the hiccup of a three-putt from 23 feet on the 13th hole, his putting was four strokes better than Tour average from the distances he putted from.

Here’s a shot-by-shot account of Snedeker’s winning 64 and the playoff, where he had to match Donald’s birdie on the first extra hole (numbers in parentheses are yards from the hole):