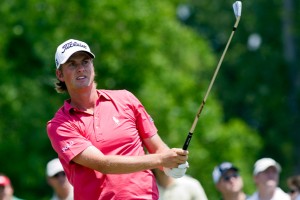 Webb Simpson was the victim of a costly penalty at the Zurich Classic of New Orleans. Copyright Icon SMI.

There is an expression in basketball that goes “no harm, no foul.” For better and worse, that expression doesn’t generally apply in golf.

On Sunday, it was for worse. Webb Simpson, with a one-stroke lead at the Zurich Classic of New Orleans, was penalized one stroke when his ball moved slightly on the green as he prepared to tap in a one-foot putt on the 15th hole of the final round. He gained no advantage, as this was a putt he would make 100 percent of the time. What’s more, he didn’t really cause the ball to move. He put his putter on the ground several inches behind the ball, an act that was certainly a mere coincidence.

This is exactly the kind of thing that makes golf look silly to non-golfers. Frankly, it looks silly to a lot of golfers, too.

These unfortunate situations arise due to the Rules being black and white. It nearly always comes down to a question of fact—only in certain special circumstances are a player’s intent or “reasonable evidence” a factor. If “x” happened, it’s a penalty, whether or not “x” really helped the player.

Of course, it usually traces back to a good reason for “x” being an infraction. Take Dustin Johnson’s penalty for grounding his club in a bunker on the 72nd hole of the 2010 PGA Championship. There’s a reason for not allowing a player to ground his club in a bunker. He could improve his lie in the soft sand, or he could test the condition of the sand and improve his judgment of the shot—all of this in a place on the course that is considered a hazard.

The manner in which Johnson touched the sand with his club gave him neither of these advantages. Nor did he even know he was in a bunker. None of that matters. He grounded his club when his ball was in a bunker, and that’s a penalty. (People complain about the Rules being complicated, but you can imagine how much more complicated they would be if they tried to account for situations when a given infraction didn’t really help a player.)

Except for the fact that it didn’t occur in a major championship, Simpson’s situation was just as cruel, especially since it happened on a tap-in. It was as if with 30 seconds remaining and the game in the balance, an NBA referee decided to call a touch foul in the backcourt. Such discretionary calls or non-calls aren’t a part of golf because rulings come down to facts, not officials’ judgments (the positive side of this is that the outcome can’t be determined by a blown judgment call).

There’s an additional level of unfairness in Simpson’s case, because there is less justification for the Rule in the first place. The basic principle is that if a player causes his ball at rest to move, he should be penalized. That’s fine, so far. Even though we aren’t necessarily talking about gaining an advantage (the ball moving could either help or hurt the player), it’s one of the fundamentals of the game that the ball be played from where it came to rest.

It gets a little shakier when it covers the situation where we can’t be certain what caused the ball to move. Since there’s no such thing as a “judgment call” here, the idea is that if the player might have caused the ball to move, the Rules treat it as if he did cause it to move. The Rules makers have judged that putting the club on the ground might cause the ball to move, so they wrote it such that if a player has taken his stance and grounded his club, he is penalized if the ball subsequently moves.

Here’s the thing, though: Does putting your putter down behind the ball on the green ever cause the ball to move? Yes, this might happen in longer grass in the rough and (less likely but still possible) on the fairway, when the movement of the grass might cause the ball to move. But on the short-cropped grass of the green, this isn’t going to happen.

When do we ever see balls at rest moving on the green? When it’s windy. The only other time it might happen is if the ball is perched on the edge of a tiny depression and might still be incrementally moving all along, much like a ball hanging on the lip that takes a few seconds to fall. Simpson might have been victimized by a combination of both factors—the wind was blowing fairly hard (but not a gale by any means) and he was preparing to tap in a ball that had not been marked and replaced.

If it’s so unlikely that a player causes the ball to move on the green unless he actually touches the ball with his club, why should the Rules penalize the player for the ball moving? It turns out the USGA and R&A, the governing bodies that write and revise the Rules, have been asking themselves that same question, even before the Simpson incident.

USGA vice president Tom O’Toole said on Monday that a Rule change was being considered that would state that if it was “known or virtually certain” that the player didn’t cause his ball to move the player would no longer be subject to penalty. The revised Rule would stay true to fact-based principles, with the tiny fudge factor of “virtually certain.” But it would recognize the reality that if the ball at rest moves on a windy day on a fast green, it’s virtually certain that the wind, and not the player, caused it.

So, this could be a small area where “no harm, no foul” could legitimately apply in golf, though it’s more like “no cause, no foul.” If it happens, it’s still too late to help Webb Simpson.

One Response to “No Harm, No Foul? Not in Golf”