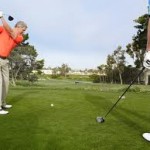 Straight down the middle!

Right after La Costa Resort & Spa opened in 1965, people from all around started flocking to La Costa to play their 2 golf courses. The original 7,200-yard course designed by famed golf architect Dick Wilson covered 215 acres and cost $1.5 million to build – a lot of money in those days. Shortly after it opened, the course received rave reviews and built the reputation of being one of the great courses this side of the Atlantic. I stayed at La Costa a week after the LPGA Tour event, the Kia Classic that was played on the South Course. The golf course when I played was, of course, in excellent condition even though the greens had just been punched.

The first televised was held in 1965, that being the Haig & Haig Scotch Mixed Tournament that was moved from Florida. This event, and the reputation of the golf course, attracted such big-name players as Billy Casper, Miller Barber and Carol Mann. The following year of the event drew over 15,000 spectators with the help of Gene Littler and Mickey Wright bolstering the field. Over the years, the reputation at La Costa grew and the golf course was being recognized more and more to the point where the PGA’s Tournament of Champions was played at La Costa from 1969 to 1998. From 1999 to 2006, the World Golf Championships – Accenture Match Play Championship made its home at La Costa Resort & Spa. All in all, La Costa has hosted 37 PGA Tour events, a great accomplishment for any golf facility.

The Champions course, as it is known today, formally the North Course, was originally designed by Dick Wilson in 1965 when La Costa was actually a 27-hole facility. It was then redone by Joe Lee in 1973 and 1984. The newest redesign was done last year by Damian Pascuzzo, Jeff Brauer and Steve Pate who now plays on the Champions Tour. This Par-72 layout is a healthy 7,172 yards from the back tees and has a rating of 75.1, enough to test the skill level of even the best players. The newly refurbished greens have bent grass – my favorite – and make up a very interesting complex of greens. Since the course is new, the rule for a while is “cart path only,” which is well understood. As with the South Course, you have to be able to turn the ball both ways on the Champions Course to take full advantage of driving the ball in the widest part of the fairway and to hit the proper portion of the green in hopes of making birdie. Some of the greens present you with false fronts, run offs on the sides that make for difficult up and downs.

Living in Las Vegas where the air is dry, I was quickly reminded that when you play golf near sea level and you are close to the ocean coast, the air is much more dense, which translates into using at least 1-2 clubs more. I found that to be very enjoyable for me because it presented me with a challenge that I don’t normally experience. Anyway you slice it – excuse the pun, you, as a golfer, will enjoy the challenges, the scenery and the overall surroundings that the golf courses at La Costa offer. I look forward to one day going back in hopes I can remember the little nuances that await you on the putting greens.
For more information, go on line to lacosta.com.