Every golfer I know, including me, has the same New Year’s resolution…to play better golf. As a consequence, a lot of players will look to the obvious and think they need new clubs. After all, the clubs they purchased a couple of years ago just isn’t working as well as they would like. It’s only natural that a lot of us would feel that way because after all club manufacturers spend millions of dollars advertising convincing us that their new line of clubs will do miracles for our game. They promise you that their clubs will give you more distance, will help you hit more accurate shots and most importantly will help you score better. Heck, all you need to do is rush down to your local golf retailer and plunk down your $800 for that new set of irons just waiting to be taken home and unwrapped.

Having gotten over the guilt of getting that first new club dirty when on the practice range, you slowly work your way through all of the new clubs “breaking them in.” Walking up to the first tee, you’re already imagining a fantastic round all due to these new irons. Just like the commercial said, you’ll probably be at least a club longer and you’re going to hit a lot more greens. Just think, if you make a few more putts then normal…career round! Rather then take up words to describe each and every shot during the round, let’s just summarize.

The only time you found yourself hitting shots longer with your new irons is when you bellied the ball and it ran forever when it hit the hard pan. You weren’t really more accurate then normal because you still were slicing the ball and missing greens to the right. You found yourself shooting just about what you always do because you played just about the way you always play. You’re asking yourself, “What the hell happened?”
Here’s what happened: You like so many other players refuse to believe that all the new technology put into golf clubs today will help you overcome limited athletic ability, will help you overcome long developing swing flaws and help you overcome an over estimation of your overall game. It’s called reality!

Disappointed? Sure. It makes you think, “Wonder what I can get for a trade-in?” 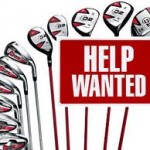