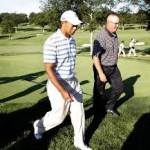 As a person heavily involved in the game of golf, both as a player and golf broadcaster, I have seen the game of golf go through many changes to evolve into the game it is today. Professional golfers today are for the most part more educated then decades ago. They are by far in much better physical shape and the golf equipment used today is light years from the early days. What’s also light years from the earlier days is the gallery that attend tournaments.

Back in the day, folks who went out to attend a golf tournament for the most part were very polite, very respectful of the players and of the other people marching up and down the fairways following their favorite player. No need for any of those “hush” or “silent” signs in those days. People then knew how to behave themselves. There was no pushing, shoving or disrupting players because of people trying to shove people out of the way trying to get a better look at the putting green. No. In those by-gone days, folks came out to a tournament to just enjoy the golf and go along with just being considerate and polite.

Today’s gallery is quite different. To begin with, I think that more people might be attending more tournaments. The average age of the spectator is younger then it once was. Attitudes toward the game and toward fellow patrons is different. Today’s game has more “young people” playing golf. These are the same kind of young people who go out to play with a 12-pack….and I’m not talking golf balls here. These are the same young people who are much more aggressive at not only golf, but life as a whole. These are the same young people who for some unknown reason who make it their mission to become stupid on the golf course during a tournament. Their stupid chants and comments like “Get in the hole,” or You’re the man” get really tiresome real quick. The sad part about it is that they have no idea they are acting and being stupid. The folks around them who get annoyed from people yelling in their ears should tell these idiots to shut the hell up.

If it were up to me, I’d have the PGA Tour kick these morons of the course. Nobody likes hearing these stupid utterances…especially the players. I thought golf was suppose to be a dignified game anyway leaving no room for crazies like this. They add nothing to the game. I wonder if people like this do this kind of thing when playing on their own golf courses? Probably. Like I said, you can’t fix stupid…no matter where you are.
Dennis Silvers