Greg Norman, aka The Shark, has gone off the deep-end again….excuse the pun.  The Medalist Golf Club in South Florida, a design that Norman and Pete Dye were involved with, has decided to hire Bobby Weed to restore golf course. The Board of Directors at the Medalist voted to overlook Norman and went with the more traditional Weed of PGA Tour fame.  I say  “PGA Tour fame,” because Weed has been involved with a number of “player designs” for the Tour as well as a number of original designs. When Norman got wind of the decision, he cried like a baby and threatened to remove his artifacts and pictures from the club. I guess you could say his feelings got hurt.

Given the relatively recent background of Norman, you’d have to wonder if this was a personality trait. After all, Norman hasn’t had the greatest track record with marriages and women. I guess even with all the money Norman has, if you’re basically a jerk…and he is…that doesn’t help you win fans and keep relationships. I think it’s a smart move by the Medalist because of 3 factors: 1. Several of Norman’s designs have had to be re-done because the golf courses proved to be way too hard. 2. Norman, like a lot of other high-profile designers charges way too much money with the tab eventually being picked-up by the members or the resort player. 3. Who wants to play a golf course that’s designed by a guppie instead of a big, bad shark anyway! 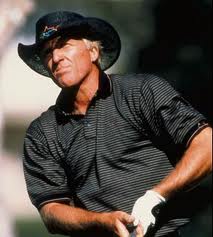