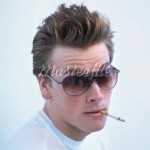 I have to tip my hat to PGA Tour player Spencer Levine for a number of things. First, for being one of the world’s best golf players. That’s why he’s on the PGA Tour. Secondly, for having enough self-confidence to do what he does apparently when he wants to do it. Thirdly, for openly smoking cigarettes when playing in competition in front of men, women and children without fear of reprisal. To me, an ex-smoker, I give Spencer credit for not hiding what so many other Tour players do. Most are closet smokers because they feel the image they try to portray to fans and alike would be blemished should they been seen doing something that the public in general finds distasteful.

Most folks who are in the public’s eye want to portray an “all round good guy” image. It’s important for their team, you know, the agents, the bankers, the coaches, any number of people who make their living off of how well another makes theirs. Pitty the poor folks who handled big John Daly. Before John hit upon self-imposed hard times, he and his entourage were making big bucks, but eventually the drinking, the smoking, the gambling, the women troubles all caught up to him and John Daly is almost a forgotten name. Believe me when I tell you that there are a number of John Daly’s out on tour today…not quite to the same degree, but nonetheless out there.

I have been sent e-mails and have received phone calls from people who caddy on the PGA Tour who have told me of “their man” having been on drugs or are starting to develop a drinking problem. Recent published stories have given light to Tour players caught being publicly intoxicated, being caught smoking marijuana or suspected of taking body enhancing steroids.

Last year about this same time, I interview Spencer Levine on my radio show for Fox Sports. Never having had the chance to speak with him anytime prior, I wasn’t sure just what to expect. Well the interview kind of got off to a slow start but after a while, I heard the “click” of a lighter with the short sucking sound it takes to light a cigarette. After that, I knew I was home-free…and I was. It turned out to be a fun, informative interview and Spenser was very complimentary. As long as the cigarettes Spencer smokes has a label, I have no problem with that at all.

I do have a problem, however, with all of these other guys who worry more about their public image then the way they play golf. If you can’t smoke outdoors on a golf course for cryin’ out loud, where can you smoke? Anyway, I for one thinks Spencer would look much cooler smoking a pipe.