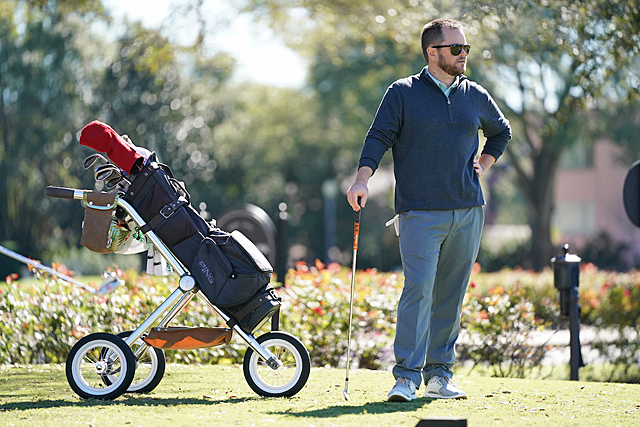 There those of us who think of golf is a walking game and shun even the thought of riding the four or more miles of a typical eighteen. There is the question though that without a caddy walking requires carrying a bag of maybe 30 lbs. loaded with clubs, balls, umbrella and all the other paraphernalia we deem necessary.

The obvious solution is a pushcart and there are some good ones but if you are in the market for a pushcart the recently introduced Walker Trolley should be on your short list to check out. It combines the refreshing approach of classic clean lines with advance design features.

Weighing in at 19 lbs. the feature of the Walker Trolley Cape model first catching our attention was the center hub, a patent pending design, allowing the legs to fold on two different axes making pre-round unfolding and post-round folding a breeze. Simple and quick to do the folded Trolley fits in any car trunk.

The body is aluminum with a brightly polished finish framing the wire wheels which boast white sidewall tires. There’s a carryall pocket of waxed canvass attached to the leather 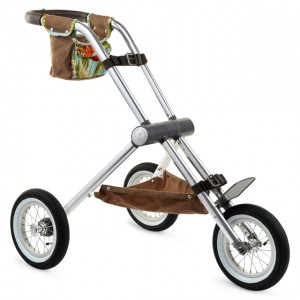 wrapped handle for extra golf balls, scorecard, pencil, drinks, etc. while the lower storage area can handle a variety of items including a cooler. And a further example of the thought in the Trolley’s design, engaging and disengaging the parking brake is as simple as stepping on a foot pedal located near the left wheel.

Our interest in the Walker Trolley led us to ask some questions of Brad Payne the Austin-based company’s founder and CEO who has brought a fresh perspective and unique approach to golf pushcarts.

Ed Travis: What was your business background before starting Walker Trolleys? 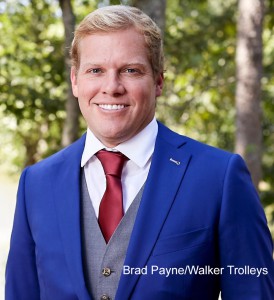 Brad Payne: I worked on Wall Street doing M&A [Mergers and Acquisitions] after getting my MBA at Northwestern. I spent some time doing corporate development and strategy for a large radio conglomerate in Atlanta, Cumulus Media, which led me to Apple to work in digital advertising. I spent the prior 4 years before Walker Trolleys leading the advertising relationship with NBCU [NBC Universal] for Apple News.

ET: How did you come up with the idea for this type of pushcart?
BP: When I moved to SF, I didn’t know many people so joined a club in the city called Presidio. Most of the members in the Saturday morning games were walkers and were allowed to store their push carts in the bag room. Anyone was able to use one that was not being used, so I sampled about every model in the industry over 4 years. Some were better than others and provided features that were better, but they were all pretty similar. It wasn’t till a trip to Scotland that I realized how these push carts just seemed out of place with the tradition and history of the game. I also had a fond affinity for what Seamus, Jones and MacKenzie were doing in creating products that had some connection to the history of the game while still being modern. I just felt push carts could go that way as well. And I saw what had happened in the baby industry with strollers over the past 20+ years that people were willing to pay for quality and felt that could be applied to golf push carts as well.

ET: Talk a little about the Kickstarter campaign as part of initial funding and how that affected the timing of the startup and moving the company to Austin?
BP: We had always planned to do a Kickstarter in the beginning to introduce the product to the masses. We never expected it to be some groundbreaking fundraising project, but rather a signal to us that there was some market demand for our product and people thought the Walker Trolley was cool. My wife and I had moved to Austin in April of 2019, about 7 months before we launched the Kickstarter. Our move was a combination of professional and personal in order to get out of SF. I decided to add Austin as a part of the logo for our newly adopted city because Austin represents a lot of positive images to people. It’s known as a cool, fun city with great people, nightlife, music, etc. Kind of a rising star in terms of cities in the US…kinda what we want to be in the golf industry. The city is also such a great place for entrepreneurs, especially in CPG…Tito’s, Yeti, Deep Eddy, Kendra Scott…a lot of great brands to come out of Austin.

ET: What are the key features that make it different from other push carts?
BP: I believe the Walker Trolley is different from our competitors because we started from a different place in terms of the product. Our trolley started on the course and we designed for the on-course experience. We wanted to make a trolley that looked cool, with clean sleek lines and classic design features, such as the white-walled tires. And it may sound cliché, but I think creating a great looking product is incredibly important to a lot of people. Maybe some of that is from my time at Apple. It needs to look great and function simply. I believe a lot of other competitors are more focused on creating the smallest folding product and have designed the look and function around these goals and that’s where we are different. I just don’t believe that many people think about how great it is that their trolley fits in a small space in their garage, but rather find a bit more joy about having something really cool in their 3-4 hours out walking the game.

ET: Where is it manufactured?
BP: We have partnered with one of the largest makers of juvenile products in the world. They’re a global firm that makes some of the best high-end baby strollers. We felt they had the experience in making folding objects with wheels at scale at an incredibly high-quality level and fit what our customers would expect.

ET: Presently pre-orders are being taken on the website, when will units begin shipping and are there any options or accessories offered for the Trolley?
BP: I think like every company in the world, we have all been impacted by COVID-19 and Walker Trolleys is no different. We were hoping to begin production in the beginning of April but delays due to the virus have pushed us back to May. Assuming no major issues or delays, we should have product to the states by the back half of June and will begin shipping to customers. And yes, there are accessory options. We are working with a well-known company here in the US to design an upgradeable line of storage accessories…think Hawaiian, camo, tweed, etc. We are very excited to offer these options to our customers and give them the ability to customize their trolleys. We hope in the future to have a really large selection, much like people own multiple head covers and they can swap them out as they feel.