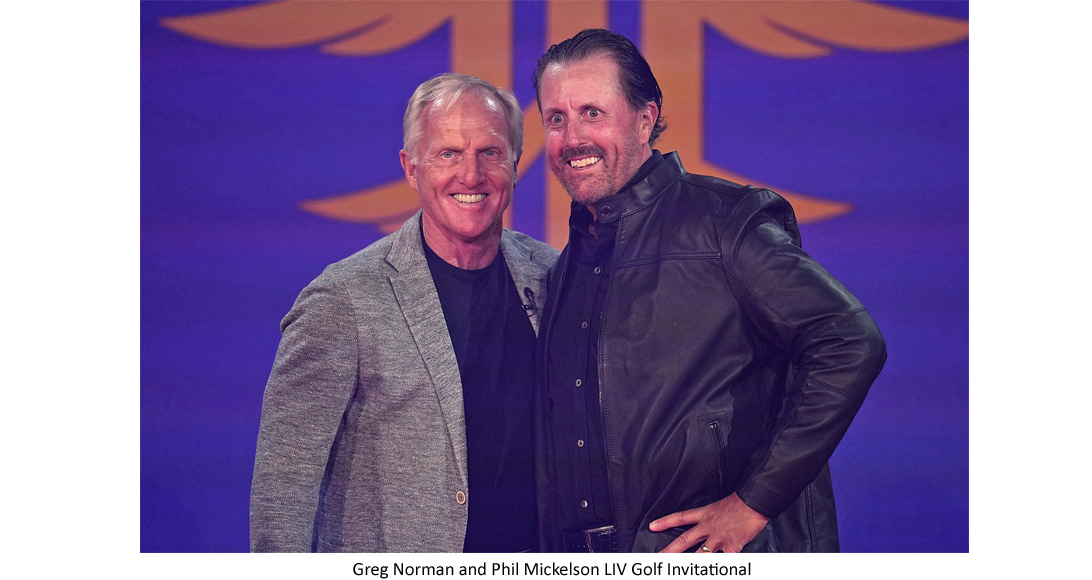 The LIV Golf Invitational Series (“Golf, But Louder”) paid for by Saudi Arabian oil money may be several things but most obviously it is not about growing golf’s participation around the world nor creating playing opportunities for world class players. That was the rationale pushed hard by those fronting for this competitor to the PGA Tour and DP World Tour.

Look at what the management, i.e., Greg Norman, has done, not said, but done. Norman initially spoke of how the new tour wanted to work with the established professional tours and most emphatically not be a competitor. In reality that is not the case; the LIV Golf Invitational Series is not only a competitor but definitely not cooperating with the PGA Tour and DP World Tour.

The crux of Norman’s pitch was the new tour would create additional playing opportunities for elite players but at the same time did not acknowledge neither of the established circuits would allow their members to play in competing events. Either Norman and company thought we weren’t listening or were so gullible we wouldn’t see through the hyperbole and is another case of fans around the world being shortchanged.

Justification from those playing LIV Golf are rationalizations, misstatements, and innuendo over what they say are issues with the PGA Tour and DP World Tour. It’s not they weren’t making an extremely good return on their golfing talents but that they want more. In itself this isn’t wrong however most adults have figured out when decisions are made solely for the lure of money things almost never work out.

What no one seems to emphasize is the PGA Tour provided the opportunity for the defectors headed by Phil Mickelson, Dustin Johnson, Bryson DeChambeau, Pat Perez, Louis Oosthuizen, Patrick Reed and Sergio Garcia a place to play against the best in the world and develop their games. Along the way this group of seven made over $340 million in prize money and that does not include off course revenue from sponsorships and endorsements.

This cannot end happily. The most galling part of this situation is some of the professionals choosing to leave the PGA Tour, indeed favorites of this writer, won’t admit it’s a simple case of “Gimme the money.” They skate around what LIV Golf is about deflecting attention from the human rights record of a misogynistic regime that happens to hold control over a significant portion of the world’s oil not to mention having probable links to terrorists such as those perpetrating the 9/11 massacre.

Seeking other opinions, I talked with a veteran woman player who’s thinking surely reflects many others. “Why can’t these players go after the money? Everyone can try to find a new job that pays better. The Saudis faults and treatment of women are not on the players’ minds just the fact they can play a lot less and earn a lot more. After all its just golf.”

Certainly “it’s just golf” is a point of view but it ignores the reason the Saudi’s are putting up such immense sums with no hope of making a profit hoping to make us forget the truth. Backing Hall Fame member Greg Norman’s 30-year vendetta against the PGA Tour evidentially seemed like a good way to accomplish their “sportswashing,” a practice going back to at least to Germany’s sponsoring the 1936 Olympic Games.

Another long-time amateur player told me, “The money is doing the talking and until those guys realize that reputations are more long-lasting that’s the way it will be.” In other words, it’s their legacy versus life-altering sums of money.

The LIV Golf titles mean nothing. The season is only eight 54-hole events and fields are limited to 48 players with a no-cut format and a mixture of individual and team scoring where everyone gets paid.

A glorified series of exhibitions would best describe it though they can boast some ranked players who have the task of carrying the rest of the mediocre field. Is that something to stir the interest and emotions of golf fans? Not likely.

Prize money is guaranteed and the rumored size of the amounts for signing with the new tour ($200 million for Mickelson!) creates a competition without real competition. Winning or even playing well loses a lot of significance because regardless of score each of the 48 takes home a check.

Golfing skill is being upstaged.

No longer is it how good you are but how quickly you can get your name on the LIV Golf contract.

The future in part will be determined what the major championships decide concerning LIV Golf members eligibility. The USGA allowed them to compete in the U.S. Open if they had already earned a spot but The Masters, PGA Championship and British Open have yet to make public their thinking.

Whatever the future holds the LIV Golf Series’ ill-conceived attempt to carve a spot in professional golf for themselves is to the detriment of the establish PGA Tour and DP World Tour. Fans, local communities, and charities will also be big losers. Right now, most world class golfers compete against each other almost weekly while building a reputation and a legacy of which they can be proud.

Others are taking the approach easy money is more important.