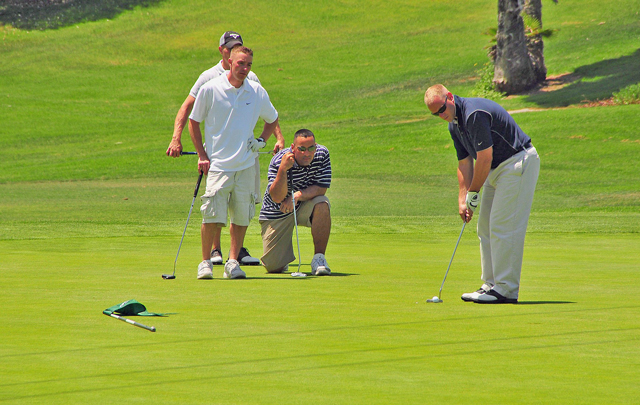 The topic of slow play leapt into focus on social media when the number one and number three ranked players in the world, Brooks Koepka and Rory McIlroy, criticized the time a few of their fellow Tour players take to get off a shot.

That’s not the whole story though. The video also showed playing competitor Justin Thomas fidgeting over on the side of the green. First one foot then the other. A tug of the shirt, a rub of the cheek and a rolling of the eyes with “Come on already hit it” plainly showing on his face.

Oh, and after all the machinations and incantations DeChambeau missed the eight-footer knocking it four feet past.

Reaction on Twitter pummeled DeChambeau and the PGA Tour with incredulousness, outrage and disgust.

The Tour was quick to respond. In a statement after the tournament was completed PGA Tour Chief of Operations Tyler Dennis said, “We are currently in the process of reviewing this aspect of pace of play and asking ourselves, ‘Is there a better way to do it?’ We think technology definitely plays a key role in all of this and we are thinking about new and innovative ways to use it to address these situations.”

It would seem this is another case of better late than not showing up at all. By the way where is the USGA on all this? They used to do “While We’re Young” PSAs with Arnold Palmer and have continued to promote cutting the time it takes to play by pushing nine-hole rounds. You can judge for yourself, but it will be interesting to see if anything substantial comes from this recent viewing with alarm, taking another firm stance and committee formation to “assess the problem.”

To be fair though, some aren’t sure slow play really needs a remedy, and this could be worth thinking about. They are of the opinion golf is a chance to enjoy friends, decompress from life’s stresses and even commune with nature. This isn’t as farfetched as it may sound though it certainly doesn’t reflect the majority’s view since slow play has been an issue for as long as I can remember but let’s be clear about two things.

The cause of slow player is the players. That seems to get lost in all the noise, but players cause it and players can fix it…if they want to.

The self-centered attitude whether the player is a top ten ranked professional or the guy ahead of you last Saturday who changed clubs three times (only to hit it in the water anyway) is the basic problem.

A basic problem rooted in the lack of respect for others.

Harsh you say? The truth is often uncomfortable, and another uncomfortable fact is slow play is fostered by a whole army of enablers.

Course architects (layouts too difficult), coaches (not teaching ready golf), the USGA (no effective overall rule), the PGA Tour (not enforcing their current rule) and course management (seven minute tee times and tucked pins on too fast greens) but most of all, the problem lies with us. The fans who put up with it.

Should we all decide watching televised golf is a not fun and switch to bowling, sponsors and advertisers would quickly force the PGA Tour to stop enabling slow play. Lower viewership inevitably would lead to reduced sponsor and advertising payouts sending a clear message to Tour players.

Their own financial self-interest would do the rest.

Slow play on the Tour will go on until fans and sponsors decide enough is enough.

As far as the three-change-of-clubs guy is concerned, effective course rangers can work wonders especially if they are properly trained to manage the idiot-factor inherent in self-indulgent me-only players. Not easy for clubs to do but it’s a lot better than shrinking the customer base, i.e., pushing golfers away from the game by catering to the inconsiderate few.

As Walt Kelly’s character Pogo said, “We have met the enemy and he is us.”