TaylorMade-adidas Golf’s marketing campaign this year centers around “Loft Up,’’ meaning the company wants players of all skill levels to increase the lofts of their drivers – preferably TaylorMade drivers. Lofting up is something TMaG research and development boss Benoit Vincent has been advocating for years. It’s beginning to bear fruit this year as several TaylorMade PGA Tour staff players Tour are using drivers with as much as 13 degrees of loft to help increase distance. 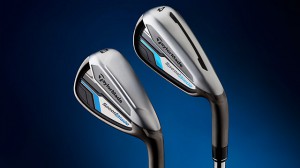 But while lofting up mainly is focused on drivers, I found it works equally as well for irons. This past week I was fit for TMaG’s new SpeedBlade irons at The Kingdom at Reynolds Plantation in Greensboro, Ga. The Kingdom is TMaG’s one-stop place for all things custom-fitting and club testing.

Understand my regular iron specs are flat lies with an 85-gram steel XP shafts. The irons worked well, but my misses most often resulted in ‘fat’’ shots that had no chance of finishing near the target.

After watching me hit SpeedBlade irons with several loft/shaft combinations, TMaG club fitter Alan Stone fit me with SpeedBlade irons that were each two degrees upright with 95-gram Project X steel shafts. The “fat’’ shots were fewer; my ball flight was higher; and my distance increased as much as seven yards per club.

Sure, the shafts were different, but I’m convinced most of the change was because of the two-degrees upright increase in the irons. So the next time you’re thinking about new irons, think about lofting up.

2 Responses to “Lofting up can help your iron game”