The World Golf Hall of Fame & Museum in St. Augustine, Fla. (WorldGolfHallofFame.org), and United States Golf Association (USGA) will exclusively showcase medals won by H. Chandler Egan at the 1904 Summer Olympics in St. Louis – the last time golf was part of the Olympic schedule. Golf will make its return in August, in Rio de Janeiro, Brazil. 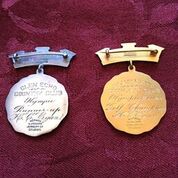 Egan’s medals represent his achievements in the individual and team competitions at the 1904 Olympics. Egan, a Chicago native and a member of Exmoor Country Club, was captain of the Western Golf Association team that won the gold medal at Glen Echo Country Club in St. Louis. Additionally, he won the silver medal in the individual competition, finishing runner-up to George Lyon, of Canada. Post Olympics, Egan was an accomplished golf course architect. For example, he’s the man who originally designed the famed Pebble Beach Golf Links along California’s Monterey Peninsula.

“As the anticipation for golf’s return to the Olympics continues to mount, we are honored to showcase these rare medals and help champion the Egan legacy,” said Jack Peter, President of the World Golf Hall of Fame & Museum. “The family deserves to be commended for preserving these medals for so many years and for choosing to show them to golf fans everywhere.”

The medals will be brought to the World Golf Hall of Fame & Museum in St. Augustine, Florida, where they will be featured in a new Olympics exhibit set to open June 23. Amy Alcott, 1999 World Golf Hall of Fame Inductee and co-designer of the golf course in Rio, will be in attendance for the grand opening and unveiling of the medals.

In addition to seeing the Olympic medals, fans visiting the exhibit can learn more about Egan’s extraordinary golf career, which included back-to-back U.S. Amateur Championship victories in 1904 and 1905, as well as four Western Amateur titles. Egan, who later designed nearly 20 golf courses, was a member of the USA’s Walker Cup-winning Team in 1934.

“These medals are an incredibly important piece of golf history,” said Michael Trostel, Director of the USGA Museum. “To have them on display is a real treat for fans of the game, the Olympics and sports in general. This exhibit is a great opportunity to connect golf’s Olympic past to its future and celebrate its return to the Games this summer in Rio.”

The medals, on loan from Egan’s grandson, Morris Everett Jr., will also be featured at the USGA Museum as part of a special exhibit running from May 11 to June 8 prior to their arrival to the World Golf Hall of Fame, and will also be at Oakmont (Pa.) Country Club during the 2016 U.S. Open Championship (June 13-19). As part of the display, the USGA will showcase the runner-up trophy that Egan received for the individual competition, which is on loan from the LA84 Foundation.