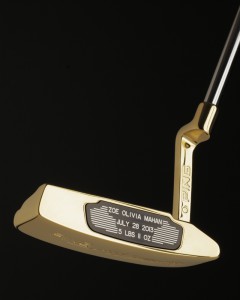 Ping Golf’s vault is loaded with gold-plated putters, each of which commemorate a victory by a Ping staff player. But a presentation today was a big today as the company presented Hunter Mahan was presented a gold-plated Scottsdale TR Anser2 inscribed with his daughter’s name, birthdate and vital statistics.

This past July, Mahan was leading the RBC Canadian Open after two rounds when he got a call that his wife, Kandi, was in labor in Dallas. Only minutes from beginning the third round, Mahan withdrew from the event and flew home for the birth of his first child, Zoe.

Now that’s a winner – and a touch of class from Ping Golf.

“We’ll never know if Hunter would have held on to win that week,” said Ping Chairman John Solheim.  “But the circumstances were so unique we wanted to create a lasting memory for Hunter, Kandi and Zoe that would forever remind them of that special day. The birth of a child is a win any way you look at it, so we thought we’d have some fun with it.”

Staying with tradition, Ping made two gold-plated versions of Mahan’s his Scottsdale TR Anser2 putter. One was given to Mahan and the other will reside in the company’s Gold Putter Vault along with more than 2,800 other Ping putters.