Callaway Golf Company’s new Chrome Soft golf ball introduces the company’s Dual SoftFast Core technology, which Callaway says leads to fast ball speeds off the driver for better distance. Callaway says the ball, which made is making its debut at this week’s PGA Merchandise Show in Orlando, is designed with low spin off the tee for players who need spin reduction to optimize their launch conditions for longer drives. 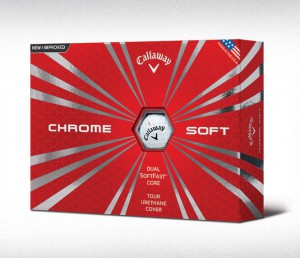 Callaway says it is the only golf ball company that has new Dual SoftFast Core technology.

The new Chrome Soft ball has a four-piece construction that Callaway says includes a mantle layer and a Tour Urethane Cover for more control throughout the bag, especially off the scoring clubs.

Callaway says Phil Mickelson, Danny Lee, Matt Every and Marc Leishman are among the players who have already used a prototype of the new Chrome Soft (suggested retail price $39.99 per dozen) on the PGA Tour.