The venerable Ben Hogan Golf Equipment Company has introduced its PTx game improvement irons, engineered with what the company calls a seven-step “co-forging’’ process that provides enhanced performance and feel over traditional thin faced cavity back irons. In lofts of 32 degrees and up, the company says PTx irons feature an industry-first titanium core solid forged design.

“The industry trend in game-improvement irons is to cast them,” said Terry Koehler, president/CEO of the Hogan Co. “As well as using multiple pieces and synthetic ‘badges’ to mask the harsh feel and sound of these kind of irons. Very simply, it is cheaper to do it that way. But we have taken a completely different approach that is true to the principles Mr. Hogan gave us with regard to forged irons. He strongly believed that only a true forging could deliver the feel and performance better golf requires.’’ 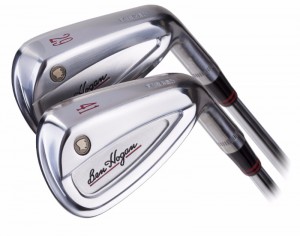 A long-time executive of the Hogan Co. during its heyday in the 1990s, Koehler is resurrecting the company to meet 21st century demands. The PTx irons are on display at this week’s PGA Merchandise Show in Orlando.

“With the PTx irons, our goal was to design the best performing clubs we could for the mid-handicap player without the constraints of cost. With this approach we are able to deliver the amazing feel of a forged players iron with the forgiveness of a game improvement iron.”

Multi-material hollow construction in each iron, Koehler said, delivers increased ball speeds across the face, while a 17-gram tungsten toe weight lowers the center of gravity and aligns the CG in line with the center of the face for increased launch angle and maximum energy transfer.

The co-forged construction, according to Koehler, positions mass behind the “impact zone” for more consistent shot dispersion across the face.

As with all new clubs from Ben Hogan Golf Equipment, the PTx irons feature Hogan’s V Sole design, which Koehler combines the advantages of high and low bounce to handle any lie, any swing type. The V Sole, Koehler said, compliments the progressive weighting system utilized in the PTx irons to deliver optimum trajectories and spin sought by players of all skill levels.

With the company’s Precise Loft System, Koehler said irons are built to exact lofts to let golfers know exactly what they are hitting. With 44 loft options available, Koehler said a set of PTx irons can be crafted to one of four distinct launch profiles.

“It really is the best of both worlds,” Koehler said. “The PTx irons prove that golfers who prefer a game improvement design do not have to settle for lower grade iron sets. This technology allows us to deliver to any golfer the forgiveness of a game improvement iron without sacrificing traditional looks and feel. We feel quite certain this is just the way Mr. Hogan would have wanted it.”

The PTx irons will begin shipping in April 2016. Irons built with the standard KBS Tour V or KBS Tour 90 steel shafts will retail for $169 per club. The standard graphite shaft offering is the UST Mamiya Recoil, at a retail price of $184 per club.