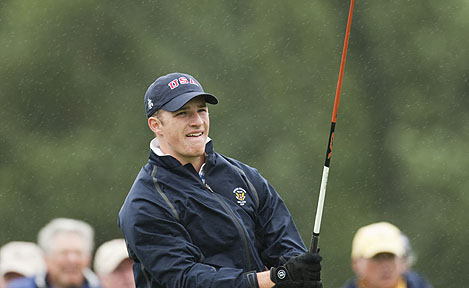 In his first year at OSU, Hoffmann earned a spot on the PING All-American first team, and won the Phil Mickelson Award as the nation’s top freshman golfer. Then he played for the United States in the prestigious Walker Cup and finished with a 2-0-1 record.

Hoffmann also qualified for match play at the 2009 U.S. Amateur after tying for 32nd during stroke play. And at one time last year, the New Jersey native was even the No. 1-ranked player in the world, according to the R&A World Amateur Golf Ranking.

But next week might very well be the highlight of Hoffmann’s young career when he tees it up for the 110th U.S. Open June 17-20 at storied Pebble Beach.

Hoffmann, who turns 21 in August, qualified for his first U.S. Open after carding back-to-back 67s in one of 13 U.S. Open Sectional Qualifiers this Monday in Memphis. He was among an illustrious list of Tour veterans that also qualified in Memphis, including Paul Goydos, Shaun Micheel, J.J. Henry, David Frost, Brandt Snedeker and Mathias Gronberg.

It was a dramatic turn of events for Hoffmann, who just 24 hours previously lost the NCAA Division I National Championship to Augusta State at nearby Honors Course in Ooltewah, Tenn.

“I think it must have been truly disappointing not winning (the team championship) because they were expected to win,” said junior golf coach Gary Gilchrist, who has trained Hoffmann for the past four years. “Like anybody in sports, though, the underdog can peak at the right time, plus there’s added pressure when you’re expected to win.”

Oklahoma State, which was vying for its 11th national title, was knocked off by Augusta State, 4-1, in the match-play final, and Hoffmann lost his match to Henrik Norlander, 5 and 4. In the semi-finals against Oregon, Hoffmann helped send the Cowboys into Sunday’s championship match with a 3-and-2 victory over Eugene Wong.

Still, Oklahoma State recorded a runner-up finish for an amazing 16th time in school history. It was the Cowboys’ 50th top-five showing at the NCAA finals in 64 years.

“I think the whole team learned not to underestimate the opposition,” added Gilchrist, whose namesake Gary Gilchrist Golf Academy is the leading junior golf academy in the world. “There’s a lot of pressure to play for OSU with all the great players that have played for that school. On the other hand, it shows a lot about Morgan to bounce back the next day at the Open Qualifier.

“He’s really focused on his dream to one day play on the PGA Tour. This is a great time and opportunity to play in the biggest tournament in the U.S. and play with the best players in the world.”

Hoffmann can certainly play with the best. On Wednesday, Hoffmann joined OSU teammate Kevin Tway as second-team PING All-Americans, highlighting a season that included five top 10 finishes in his 13 starts, including a runner-up showing to OSU teammate Peter Uihlein at the Ping/Golfweek Invitational last fall and third-place performances at the Gifford Collegiate and the NCAA Southeast Regional.

Hoffmann completed his second season as a Cowboy with a 72.78 stroke average.

“If you look at junior golfers, the cream always comes to the top and they all seem to peak at different times,” Gilchrist points out. “One day, Morgan will have a clear sign when it’s time for him to play professionally.

“Over the last 4-5 months, he’s seen a couple (OSU) teammates play real well on the Tour. In his own right, he’s just as good.”

Next week, Hoffmann is going to find out how good.