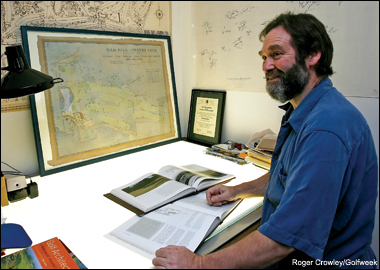 So I’ve been thinking a lot about Bob Labbance lately. Bob was a good friend, a golf writer and historian, a counter culturist after a fashion, and, as my grandfather would have described him, one of nature’s gentlemen. Note the tense. Bob suffered a traumatic fall and paralysis in 2007. He fought back to regain a great deal of motion and a large measure of his life, only to contract Lou Gehrig’s disease, degenerate quite quickly and pass away in Aug. 2008, at the tender age of 56.

You learn a lot about a guy when horrible shit befalls him. You talk more deeply and seriously about things with that person. You learn more about the man — more than you ever would have if, as we do with most acquaintances, both parties were to skate together through life unaffected by tragedy.

Bob loved the desert, and I thought of him as my family and I toured the American Southwest last week, and played a fine Johnny Miller design in St. George, Utah: Entrada Golf Club at Snow Canyon. Bob grew up in Fairfield County, Connecticut, went to school in Maine, and lived much of his adult life in Vermont. He was a New Englander through and through, and he was what I like to call an unreconstructed hippie. But he loved golf, and the counter-culturist in him allowed an appreciation of the desert and desert golf. Entrada started slowly; the red rock-infused front nine was rather ordinary and bounded by housing that was tasteful but, for me, intrusive. The back nine featured far less housing and proved damned near spectacular, the final 5 holes finishing in a linksy moonscape of black lava fields.

I first met Bob in about 1994, and only later in his all-too-short life did I learn that he fancied the idea of retiring to Flagstaff, Arizona. I got the impression his family wasn’t as keen on this particular idea, and in that way his untimely death mooted the issue. But I thought of him as we passed through Flagstaff twice last week. We were there to play some disc golf but found far more than an excellent track tucked beside the athletic complex at Northern Arizona University. More than a mile high, surrounded by open chaparral and sitting in the shadow of the 10,000-foot San Francisco Peaks, Flagstaff is physically gorgeous and the college vibe pervades. Many towns in the north of Arizona — hell, in all of Arizona and much of the West — are striking (to a New Englander especially) for just how new or post-modern they feel. Flagstaff has some of that, but it also has a proper, turn-of-the-19th-century downtown where today funky galleries and a wide variety of non-chain, quite excellent restaurants abound.

I didn’t start playing disc golf until after Bob had passed away, and playing in Arizona made me wonder what he’d have thought of it. Hardcore golfers tend to look askance at this golfing cousin, and while Bob was in many ways a counter-culturist — he lived in a commune after college, for chrissakes — he was something of purist when it came to golf. He revered the old course designs, soaked up the game’s rich history, and collected old clubs and books… But when he wrote books on course design, his subjects were Wayne Stiles and Walter Travis, not Donald Ross and Alistair Mackenzie. Bob also organized an annual Cayman tournament at his place in Vermont, where competitors holed out by chipping the ball either against a car tire (1 stroke) or into said tire (no stroke).

I’m betting Bob would have liked disc golf, recognizing that between the ears it’s essentially the same game — minus the status-seeking, the collared shirts, and the reliance on expensive, ever-upgradeable equipment. I’m also betting that, as an eminently practical unreconstructed hippie, Bob would have recognized that to love one game doesn’t prevent the love of another.

TheAPosition is a big fan of John Daly!