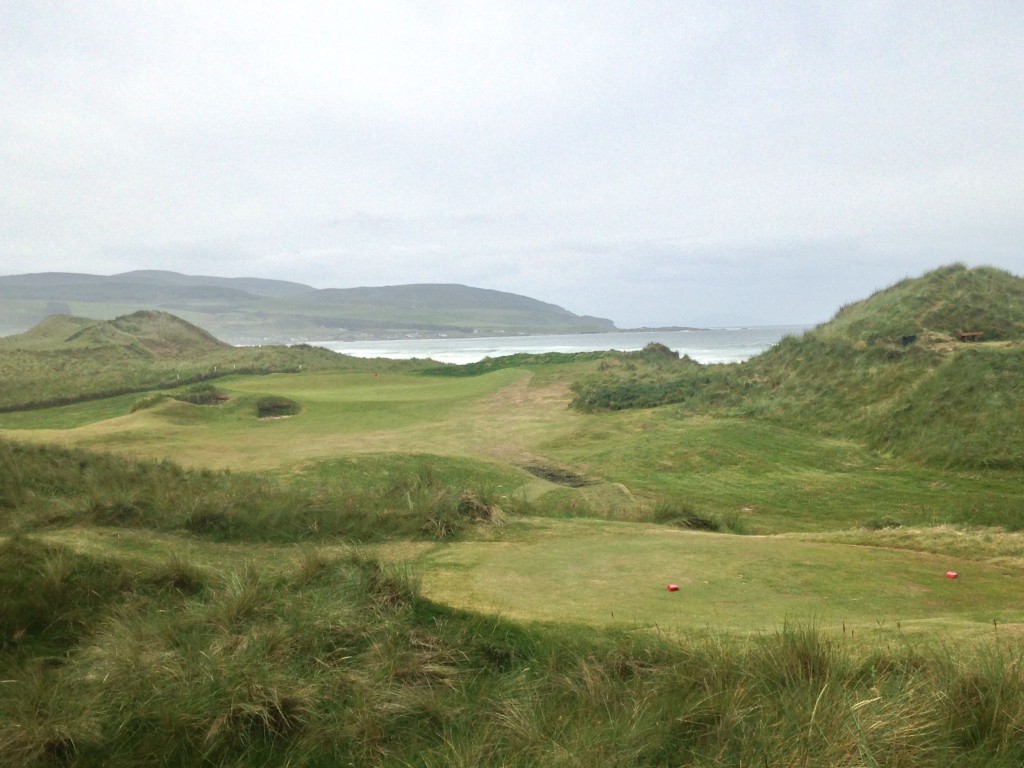 The 10-minute drive was into Campbeltown after our round at Machrihanish was brief and instructive. We passed a herd of dairy cows and a creamery, a convenient pairing.

The Royal Hotel, on a wide corner across from the harbor, lived up to its name. Like the Ugadale Hotal, across from the first tee at Machrihanish, the Royal has been refurbished. Both are state-of-the-art in every way.

While checking in, we asked the receptionist for dinner recommendations.

“There aren’t a lot of restaurants here,’’ we were told. “Most people just stay in their hotels.’’

The way she handled this pot bunker, it’s no wonder Liz is a big Machrihanish Dunes fan.

With the rain coming down—really, we didn’t see that much rain on our trip, but this was one of those days—that was an easy call.

Choosing the Black Sheep Pub over the dining room, we discovered a lively crowd, but managed to garner a small table. It was such a Scottish day that fish and chips were in order, and they did not disappoint. 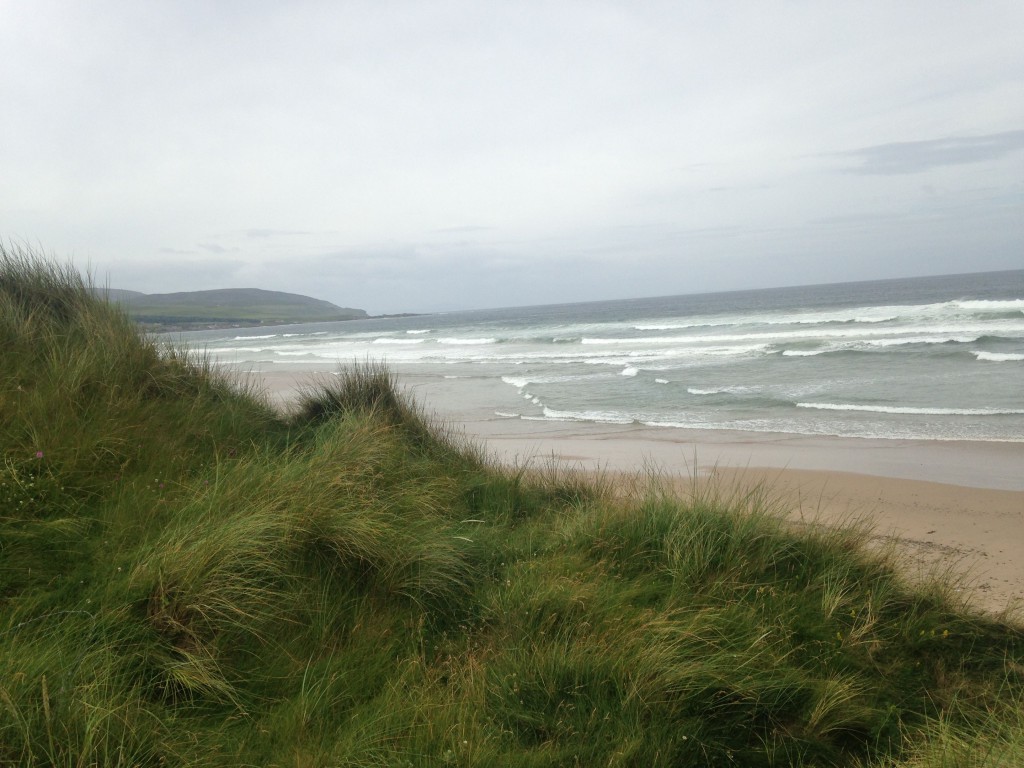 The beach at Machrihanish is stark and beautiful.

As a longtime home brewer, I’m always eager to try local micro-beers, and Liz feels the same way. But when they were unavailable in Scotland, we at least found the mass-produced brews more tolerable than America’s top sellers.

Liz favors Tennent’s, Scotland’s most prominent lighter lager, I tend to go with Belhaven Best, a creamy medium-bodied brew that comes out of the tap with a flourish of foam and settles down dramatically.

In the pub, we met a Danish man in town on business and a family from Edinburgh who were on holiday and staying at a vacation home that has been in the family for generations.

Machrihanish Dunes is an inviting and unspoiled delight.

The next morning, we were pleased to be greeted by dry conditions at Machrihanish Dunes, and surprised to see only a handful of vehicles in the car park. 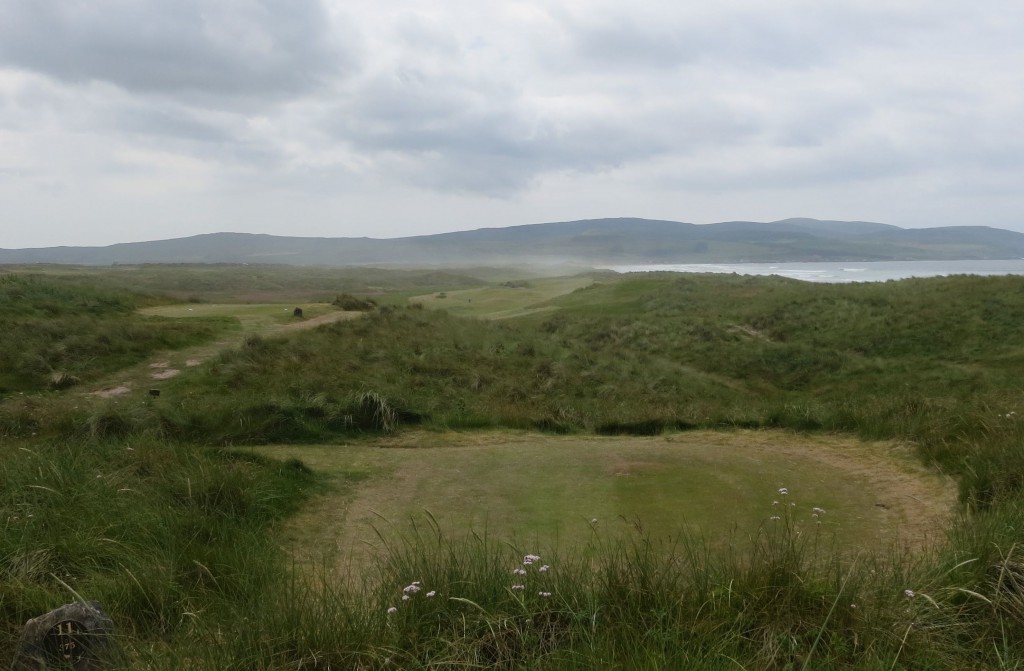 From the tee, the mist and the sea frame the ribbon of fairway.

Thinking I was playing safe, I pushed my second shot a tad right and was surprised to find it had trundled through the rolling fairway into a far-right bunker, setting me up for another sluggish Scottish start.

No worries. We were hitting a golf ball in Scotland along the Atlantic Ocean. The fairways were wide if unpredictable. And it wasn’t raining.

Liz took advantage of the short par-four fourth hole to pop her second shot on the green and give herself a birdie look before settling for par. After running through the sunken green with a little wedge that caught the downslope, I also managed a par.

And so it went. The Dunes course is a rolling wonder, with fairways and greens set amid grassy mounds. From some tee boxes and other elevated areas, the views of the sea and terrain beyond the golf course is sweet.

And while I’ve seen some disgruntled comments about the layout, I frankly don’t understand why.

From Old Tom Morris to young David McLay Kidd, this Machrihanish Dunes video shows the appeal of golf at the bottom of the Kintyre Peninsula.

What we saw was a beautiful, unspoiled golf course filled with challenges, but with the fescue cut back enough to allow golfers to have a nice experience. I defer on this count to Liz, who was very impressed with the Dunes course.

The bumps come naturally to this 2009 David McLay Kidd design. Kidd, architect of Bandon Dunes, the first course at the renowned Oregon resort, spent summers at Machrihanish as a youngster. To address environmental concerns, only seven of its 259 acres were altered—basically, the tees and greens. That means a low-running shot can end up virtually anywhere.

We had no problem getting into the spirit of the bumpy fairways. They’re not only a modern concession to environmental concerns; they give you the feel of the way the game was played when all courses were made without moving very much dirt.

Back in Campbeltown, we arrived too late for the Springbank distillery tour, which we’d heard was excellent. That was not a huge disappointment because we were able to stop in at its whisky shop and pick up a nice small-batch souvenir bottle. And by the way, we enjoyed the Edradour distillery tour in Pitlochry so much that we feel like we’ve been there, done that. But we will keep trying.

After stopping into a nearby cafe and discovering it was not “licenced,’’ we again opted for dinner at the Black Sheep Pub, where we were able to have a pint with our meal.

We were there during Wimbledon, and the bartender was kind enough to ask if we were interested in a particular match. Apparently, every match, or many of them, was available. Not a tennis guy, I said this one, a mixed doubles match, was fine.

Meanwhile, Liz took a bite out of her burger and pronounced it one of the best she’d ever had.

All in all, another very good day in Scotland.