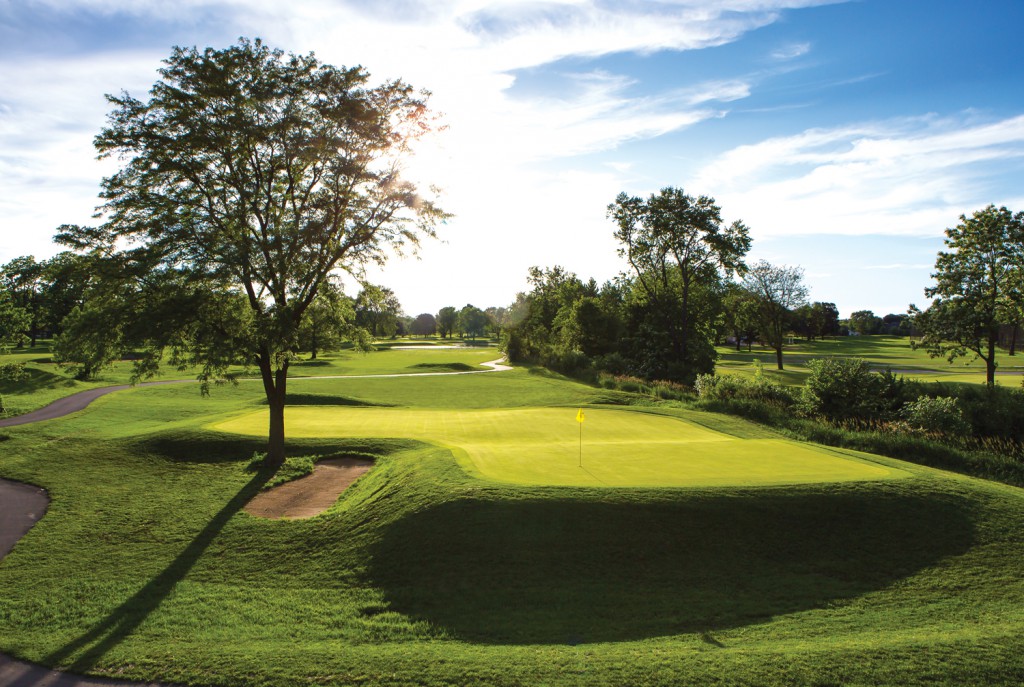 A short but tight drive on No. 18 is followed by a challenging approach to the green.

When it comes to renovations of suburban muni’s in oh-so-flat Chicagoland, it’s not easy for a golf course to make itself stand out from the crowd.

That’s especially true with land and budget must remain within the practical realities of a park district.

The Mt. Prospect Golf Club, under the clever direction of architect David Esler, has done all of that, and more.

A $9 million renovation has transformed what had been a well-worn back-and-forth parkland course into a strategic layout that uses techniques made popular by legendary designer Seth Raynor and his mentor, C.B. Macdonald.

“We wanted to do something that was unique,’’ said Brett Barcel, director golf for the Mount Prospect Park District. “We’re very happy with it. There’s a real wow factor. People can’t believe we were able to do this.’’ 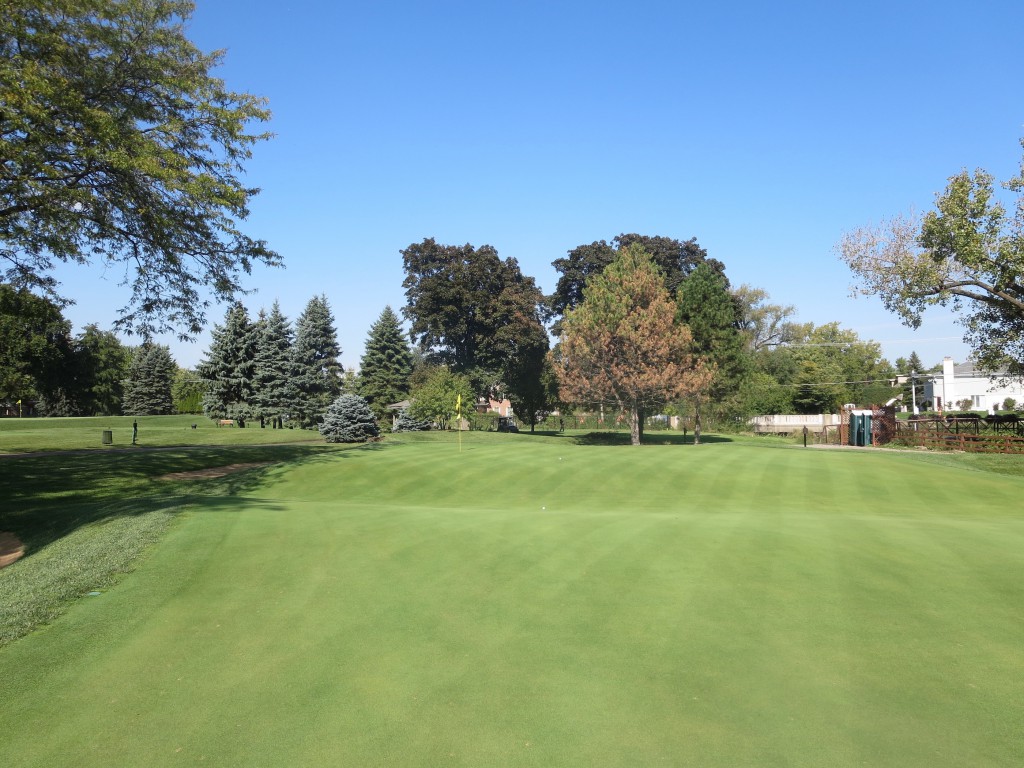 The 16th green seems to go on forever. A big swale makes this an intriguing 225-yard par-three.

While there are an abundance of short par-fours, three par-fours stretch to 465, 460 and 435 yards. And two of the par-threes play at 220 and 225 yards. And the short holes tend to be target-y deals that punish mistakes.

But Mt. Prospect, which had gone a number of alterations since it first opened in 1926, is not about length. With its many penal old-school touches that harken back to Raynor (1874-1926), a once-mundane public course has been turned into an 18-hole series of golfing riddles.

Like Macdonald, Raynor was fascinated by classic-style holes such as Redan, Punchbowl, Biarritz, Alps, Cape, Short and Double Plateau. Raynor–who laid out one of Illinois’ top-100 course (Shoreacres) and remodeled another (Chicago Golf)—and Macdonald believed there were only a limited number of different golf holes. They used “templates’’ of these holes—tweaking and combining them to come up with some of the most celebrated golf courses of the early 20th century.

All Redan holes, for example, are considered to have descended from the orginal Redan—a well-guarded par-three at the North Berwick West Links in Scotland. Supposedly inspired by a Crimean War fortification, the Redan features a green that slopes away from approaching shots in combination with elevated turf and large bunkering that tends to demand a high shot.

I have played the Redan hole at North Berwick, which is on the Firth of Forth, which is about 45 minutes southeast of Edinburgh. While the original has a large valley in front of its high-perched green, Mt Prospect’s Redan hole, the 220-yard fourth, at least offers a gap between its bunkers that will allow balls to run up onto the green.

This may be too much information for some golfers. Point is, Esler put a lot of thought into the Mt. Prospect design. This gives muni golfers a feel for the subtleties found at Chicago’s finer private clubs. 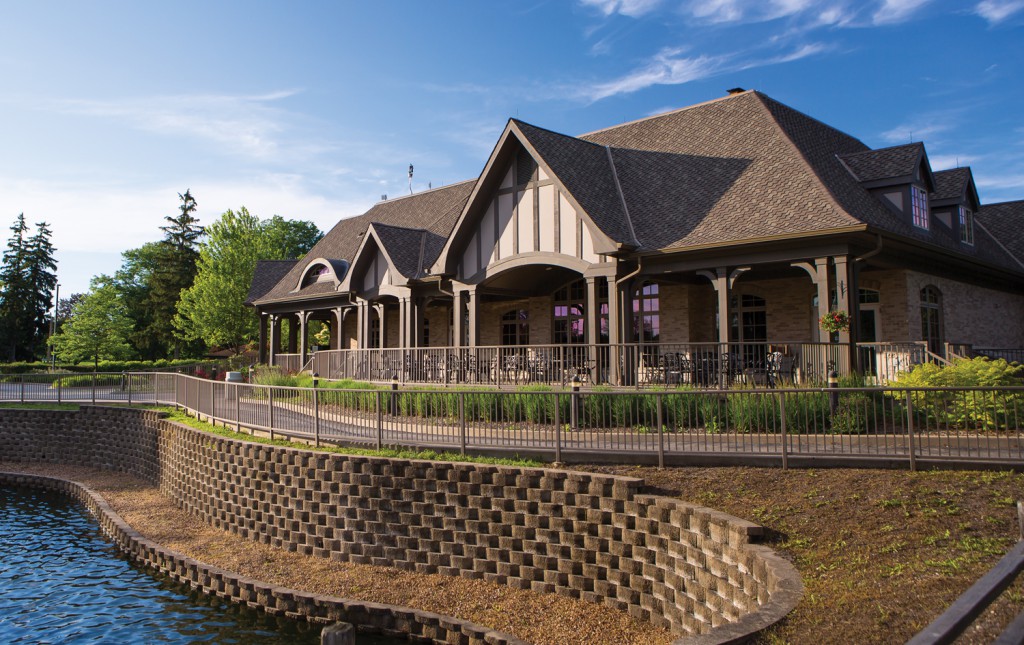 “At the end of the day,’’ Esler said, “the fun is in the playing for most. But the historic characteristics add another layer of enjoyment for a lot of players. Mt. Prospect will provide an opportunity for public golfers to experience a style of design that has only been accessible to the very, very few and fortunate.’’

The fun starts on the first hole, a once-straight par-five that has been bent into a 575-yard par-five. After an inviting tee shot to a generous landing area, the second shot must negotiate a high mounded bunker that appears to shrink the fairway. Many players will simply fly this hazard. Those unable to do that must choose between what appears to be the direct line to the right, and the left, which appears to leave a longer third shot.

Although benign-looking, the first green has many subtle contours that can send putts wildly off-line, particularly when the pin is placed on top of a not easily noticed ridge.

No. 2, which goes 460 yards, is fairly open. But the deceptively undulating green is a three-putt waiting to happen.

Old-school fairway challenges are not left out at this tribute to Raynor and Macdonald. Players who find their ball on the downslope of the grass furrows that catch errant fairway shots will discover that.

The abundance of big greens, combined with several false fronts, adds to the variety of challenges at Mt. Prospect. One par-three (No. 10) is fairly routine. But the other four one-shotters are excellent holes. The 165-yard seventh rises severely from front to back, making putting an adventure for balls on the wrong tier. The same is true at the 225-yard 16th, which has a large swale in the middle of a very deep green. 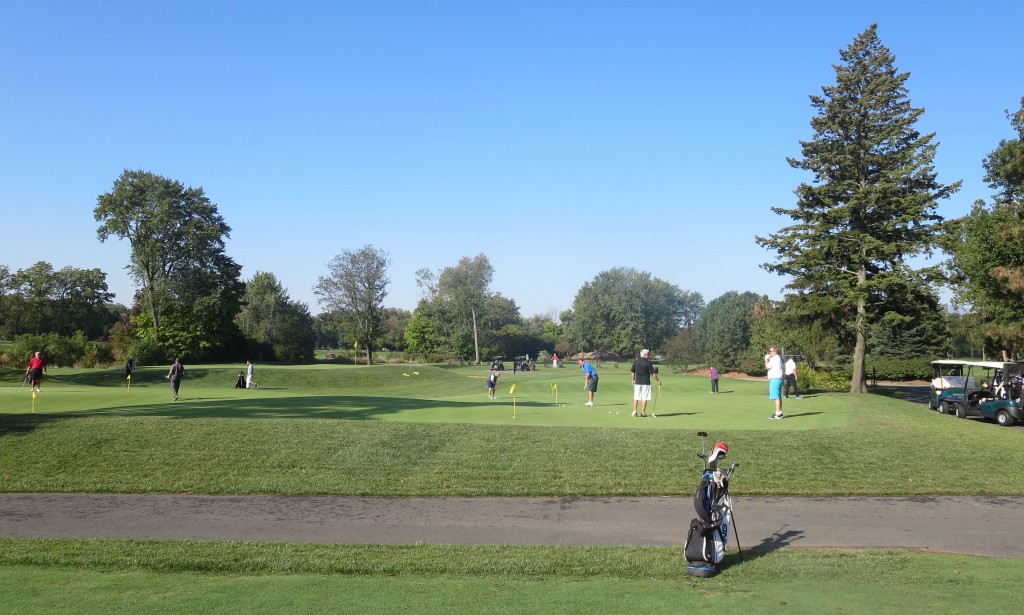 As a final touch, Esler’s Mt. Prospect renovation has made room for an expanded driving range, a huge putting green and short-game practice areas.

They all are likely to be well-used by golfers who want to make the most of their rounds at the new old-school Mt. Prospect.

One Response to “Mt. Prospect affords public golfers a trip back to Seth Raynor’s time”