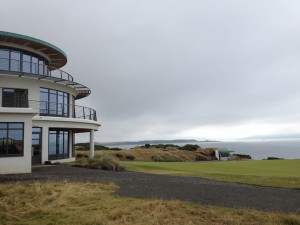 Castle Stuart’s Art Deco clubhouse stares out at the ominous sea like the bow of a ship.

INVERNESS, Scotland—As much as we would have liked to stay on at the Strathmore B&B near Dornoch, we reluctantly checked out and headed down A9.

We were going to play at Castle Stuart, an hour south. And since our itinerary had changed a bit—we had decided to meet our friends at Turnberry for our final Scotland stop—it made more sense to head back to Pitlochry after the Castle Stuart round.

That said, a return to the Dornoch area is high on our list—to play not only Royal Dornoch but some neighboring seaside links courses such as Golspie and Brora. Although not in the same class, these village links sound irresistibly charming.

But Castle Stuart had to be seen and played on this trip. I had chosen it over Nairn, which is also very high on the to-do list, on the advice of a Boston golf-writer friend. He liked Nairn, an historic Tom Morris/James Braid classic, but gushed over Castle Stuart, a new star that opened in 2009 on the Moray Firth just east of Inverness.

“Not a true links course,’’ a crusty English golf writer sniffed when I’d told him at the British Open that we had decided, with only one day free, to spend it at Castle Stuart rather than Nairn. 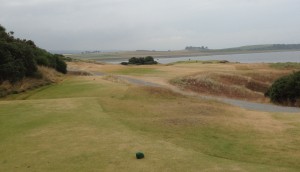 First tee at Castle Stuart looks out to an inviting fairway

On the other hand, Castle Stuart had added to its appeal when Phil Mickelson won the Scottish Open there the week before the British Open. And even if it’s a newbie, it respectfully fits right in with its namesake castle, which was built more than 300 years ago.

I also had heard that Castle Stuart was similar to Whistling Straits, the Wisconsin course that has hosted the PGA—except that it’s more forgiving. That was a description I liked, and one that turned out to be accurate.

With the wind at our backs, the first three holes were a delight. They run right alongside the Moray Firth, but feature generous landing areas that are pretty much a Castle Stuart trademark.

The first three holes of the back nine also border the sea on this course, which has one nine to the left of the clubhouse and the other to the right.

I was particularly fascinated by No. 3, a 266-yard downhill downwind par-four that was within my wheelhouse. Not having many (if any) shots at driveable par-fours and feeling pretty loose, I made a good swing that had enough juice, and thought I had positioned the shot nicely between the two fairway bunkers.

I was so sure of myself, I even started looking for my ball around and behind the green before realizing the shot had kicked right on the fairway—right into the right bunker.

Determined not to botch this hole, I even had Liz  shoot video of my bunker shot. That put more pressure on, and it worked. I popped the ball out nicely. Alas, with a long downwind first putt, I had three-putted. 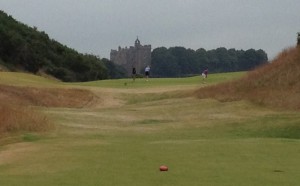 The building that puts the castle in Castle Stuart, as seen from the 4th tee.

No. 4 is a par-three of elevation changes—both on and around the green—that looks right back at the building that put the castle in Castle Stuart. A strong up-and-down left me pleased, and Liz was off to a good start, too, including a routine par on the par-five second hole.

It was here that Castle Stuart started to show its teeth. The fifth hole, which headed back into the wind, played much longer than its 400 yards. That brought two bunkers into play on the right side of the fairway, and they were magnets for balls.

No. 6 played with the wind, making it a short, fun par-five. A long, narrow green was its key feature, and our balls rolled off the front of the green to the left, leaving a challenging chip or putt back up the hill onto the slick green.

Around this time, it was looking like some weather was coming in. A foursome was kind enough to let us through on No. 7, which turned out to be another forced-march of a par four into the wind.

With a few drops starting to fall, we both three-putted the fun, bowl-like par-three eighth. I also botched the ninth, hitting a short drive that led to trouble. Even though No. 9 is a short par four, you need to be close enough to make the shot to a high-perched green, surrounded by peril. That’s not a shot you want to hit into wind and rain.

We considered stopping, but another group let us through on No. 10, so we continued on in the mounting rain. Taking extra club and swinging easy, I popped a hybrid onto the green for a par, then parred the par-three 11th when a yanked tee shot bounded off the hill to the left and onto the green. Liz was also playing well, with a pair of solid bogeys.

On the 12th tee, however, reality set in. This was an uphill par-five into a now-steady downpour against a wind that was knocking down the ball and pushing it right. After hitting two tee shots into the weeds between the left side of the fairway and the Moray Firth beach. I turned to Liz.

“What do you think? Would you like to head into the clubhouse for some lunch and a pint?’’

And so, we plodded on. The 12th hole was brutal; it seemed to take an hour. By the time we got to the next tee, though, the deluge had slowed to a tolerable rain. By the 13th green, there was only a hint of drizzle.

No. 14, a short (downwind!) par four, was typical of the fun on the finishing holes. The second shot was to an elevated, diagonal green. Liz bombed one that bounced over the green, but dodged the long bunker back there. I almost hit the green, but my ball kicked way right, leaving an interesting pitch back up from the valley.

I made pars on No. 16 (another driveable par-four) and No. 17 (a long par three where I needed driver), and Liz also finished strong, nearly parring the par-five 18th.

Not realizing Liz had gone to the clubhouse, I headed right to the car, to lose my rain gear and soaked golf bag—that thing gets heavy when wet—and to put on some dry socks.

Finding me in the parking lot, Liz said she’d put her clubs and wet gear in a drying room in the clubhouse. Nice touch. So I shouldered the bag once more and put it and my shoes in the drying room. 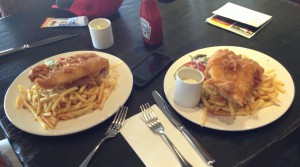 Tired, hungry and thirsty, we sat down in the clubhouse and did the math while waiting for a round of Belhaven Best, a nice, creamy Scottish Al. Liz had broken 100 (a 98) in the monsoon, and I had managed a very satisfactory adjusted 91.

Wanting to check e-mail, I asked for the password to the Castle Stuart WiFi and was told, “eagle.’’

That was amusing. But the password for Royal Dornoch WiFi had been doubly amusing, so to speak: “albatross.’’

I suppose I should be used to it by now, because I had  booked tee times online a decade earlier, on my only other European golf trip, a 2003 visit to Ireland. But I still think there’s a statement in there about modern life that tee times to historic Ballybunion and St. Andrew’s can be arranged on a MacBook in Chicago.

When we asked the waitress for an order of fish & chips and a burger, planning to share, she shook her head.

She was so right. It was not only the biggest fish & chips we enjoyed on the trip. It was the tastiest.