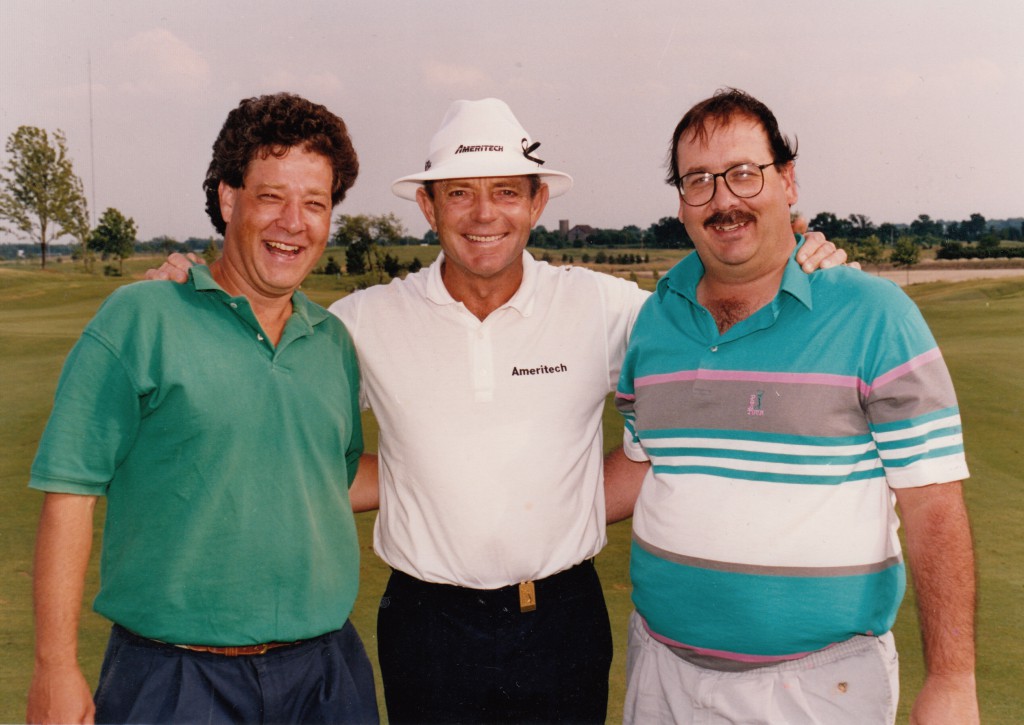 Me and Timmy enjoy a moment with Bruce Crampton at a senior-tour media day in the early 90s. This photo always made us smile. I really need that today.

My friend Tim Sassone is gone. I hadn’t seen a lot of him for a long time. But when I went on the Blackhawks beat in 1989, we were practically joined at the hip for five years.

A legendary hockey writer at the Daily Herald in suburban Chicago, he was just 58. Way too soon.

More than anything, my heart goes out to his family.

He was a dear friend. We went everywhere together. He especially loved St. Louis, where he had family ties. We always had a great time in Toronto, sitting with Bob Pulford, who told fine hockey stories during morning skates. And then there was a post-game Chinese restaurant that Al Secord turned us on to.

Side trips to Atlantic City off of Flyers games, bowls of chowder in Boston, a Montreal deli recommended by Jacques Martin. Having a drink in Quebec with wonderful Louis Sutter, the father of the hockey playing clan. We might have sneaked in an occasional round of golf, too. It was a different era, and we were younger.

One night we were in Madison Square Garden for a Hawks-Rangers game. The press seats were scattered around the rink, and there was a little squawk box for announcements.  That little squawk box said, “The World Series has been halted due to an earthquake.”

Timmy didn’t even look up. “Good,’’ he said. “There’ll be more room for hockey in the paper.”

He was also fond of making wisecracks about the concessions prices people paid.

There was a theatrical side to his life. His brother, Michael, is an actor, played the preacher/bus driver in the movie Hoosiers.

We played golf once or twice with Michael. They couldn’t have looked more different. Michael was tall and angular, from the Irish side, if I recall it right. Timmy got the Italian genes.

And the vision gene. He would see things, insights into people and situations, and they amused him no end.

Once, when the NHL was planning to move the net a foot farther away from the back boards, Mike Keenan, who was the Blackhawks coach then, was telling us how revolutionary this change would be.

So we go over to Denis Saverd, who says, “It’s a foot. What difference is a foot going to make?’’

Tim thought that was great. Especially when Savvy, who was one of his all-time favorites, proved to be right.

Another time, an aging Tommy Ivan was in the locker room greeting the media and thanking them for coming out. Mr. Ivan was a sweet man who had retired as the Hawks GM, and it was a nice gesture.

Except that the Hawks had just been bounced from the playoffs. The players were in tears and the media were quietly trying to do their job without being rude.

And this little man is walking around, shaking hands and saying, “Thanks for coming.’’

Tim also was greatly amused when Ron Caron, the St. Louis GM, would run up and down the old Stadium press box shouting, “It’s a lie! It’s a lie!’’ when there was a penalty call he didn’t like.

Tim could be gruff, but it only lasted for a moment or two. Then he was back to being kind and soft-spoken and very amusing.

And being an amazing hockey writer. He knew everything and everybody, and he wrote in a concise, straightforward style.

How many times I ran stuff past him to make sure I had it right.

I left the beat after five years, went back to college writing, and we lost touch after a while. But when the Hawks got hot a few years ago, I helped out during the playoffs. It was wonderful to see him again; we connected as if no time had passed. When we saw Chris Chelios in Detroit in 2009, it was just like old times.

Once again, I was running stuff by him—only more so. He was as generous as could be.

Last fall, when I was around the Hawks, he was not well enough to be at the practices I covered. So I’d e-mail him tapes of the player interviews, and he was so appreciative.

It was no big deal, I’d tell him. I could never repay him for all the knowledge he shared. I wasn’t counting, anyway. He was such a dear friend.

Rest in peace, Timmy. God bless one of the great ones.