Competing for your country in an international competition is a rare privilege, usually limited to a few talented professionals and amateurs. However, five amateurs with handicaps ranging from 3.2 to 23.5, earned this “once-in-a-lifetime” honor when the United States team was decided in the World Golfers USA Amateur Tour’s national finals, a 54-hole competition at the Indiana National Black and Silver Courses at the Swan Lake Resort in Plymouth, Ind. 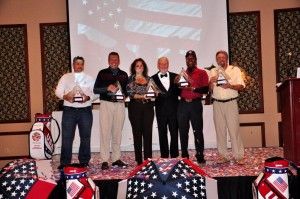 Rafols, a 38-year-old business broker and realtor from Miami, FL who carries a 3.2 index, captured flight 1 with net 78-78-79—235, overcoming 36-hole leader Lain Dickinson, who ended up tied for second with Christopher Gibson seven strokes back. “I just played my game and kept calm during the final round,” he said. “I had a lot of doubts before going to Indiana,” he added, pointing to a back injury that limited his play to just a few practice sessions. He then didn’t get a chance for a practice round at Swan Lake, arriving at 2 a.m. only seven hours before his tee time. “This is my biggest accomplishment in golf and I feel privileged to get the chance to represent the U.S.,” Rafols said about his first trip to South Africa.

Pate, a 44-year engineer from Germantown, WI with a 11.3 index, claimed flight 2, winning a sudden death playoff from Bill Nitcholas of Carrollton, TX, who represented the U.S. two years ago in Thailand, with a two-putt par on the first hole. Trailing the leaders, John Downey of Illinos and Mike Vandiver of Florida, by six and five strokes entering the final round, Pate and Nicholas finished with net 71 and 70 to tie at 224. “I’m proud to have the opportunity to represent my country and want to help by teammates bring the cup back to the U.S.,” he added.

Hauk, a 46-year-old farmer from Canton, MI with a 15.2 index, survived a playoff in a cold rain, making a three-footer for a double bogey to edge Bruce Brown of Arizona for the flight 3 title. She had traveled to South Africa the previous year on her own to play in the invitational division. She had an added incentive this year, “I wanted to win my way on the team and get the trip back paid by someone else,” she added. “I’m excited to represent the U.S. and feel that even last year I helped clear up some misconceptions about Americans with golfers from all over the world. While I want to be respectful, I’m competitive, too, and want to win that team title.”

Consistency paid off for Shavers, a 53-year-old teacher and professional photographer from Jacksonville, FL playing off a 18.0 index. He posted 72-73-72—217 to win flight 4, using the mindset of “playing the course and not worrying about other competitors” to jump ahead by seven strokes after 36 holes and winding up nine ahead of Don Lyons of Florida. “It’s a dream come true, I couldn’t think of anything more exciting than crossing the pond to represent the U.S.,” he added.

Holewinski, a 50-year-old sales manager for GE from Kingwood, TX with a 23.5 index at the Clubs of Kingwood, ran away with flight 5, posting net 70-75-74—219 to finish 10 strokes ahead of Mike Aybar of Miami, FL, who also had a bridesmaid role the previous year in San Antonio. Holewinski believes that he will not be intimidated playing in South Africa because of his having traveled and played golf all over the world. “I’m very excited about the chance to represent my country and I want to be a true ambassador for the U.S.,” he said.

“Since our national finals now consist of three rounds instead of two,as it has been in the past, I feel that the team is much stronger and more competitive than in previous years,” said Anders Bengtson, President of the World Golfers USA. “The players seemed to melt well together and will give each other all the support they need to be successful. I’m looking forward to see them bring home the World Golfers Championship Trophy this year!”