Playing in Arizona a few years ago, I ended up out in the desert–nothing unusual, especially if you hit an errant drive like I do sometimes–and I found my ball was very close to a cactus. Of course, since it was summertime I had shorts on.

So I took a towel off my golf bag and wrapped it around the leg closest to the cactus before hitting the shot. I got the ball out just short of the green and got up and down for a par to go ahead of my fellow competitor, who three-putted.

That’s when he informed me that I had violated a rule, citing the case of Craig Stadler, who had put down a towel on the ground to keep from getting his pants wet when he had to kneel on his knees to play a shot from under a tree. 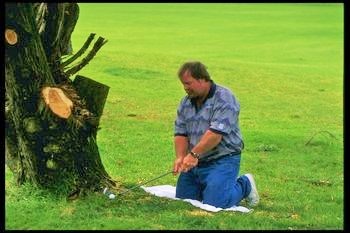 I first thought adding two strokes to my score was better than having to pick out cactus needles from my leg. However, before turning in the score and signing the scorecard, I checked with the golf professional to look at his “Decisions on the Rules of Golf,” something that all rules officials keep handy. It turns out that it wasn’t a violation.

Of course, it would have been if I had placed the towel on the cactus.

Reading the book on decisions previously made by the USGA has certainly helped me handling rules questions and playing the game for 60 years. Here are a few other examples:

I once had a blowing leaf knock a putt off line. I just cancelled the shot and putted again, making the putt this time. However, if I had gone ahead and putted from the position of the missed putt, it would have been a two-stroke penalty. If this occurred in a tournament after I had turned in and signed my scorecard, it would mean that I had to add two more strokes.
While on that penalty, I just don’t see the need to add that extra two strokes, but it’s part of the rules right now.

Playing golf here in Texas during the summer, you will sometimes have big fans blowing to cool the greens. If air from one of these fans happened to move your ball, you could replace it. So that’s what I did. If wind did the same thing, the ball would have been in play from the new position, just one of those bad breaks.

In four-ball match play, putting out after a concession of a putt might be OK unless it might be of assistance to your partner. An opponent once wanted to bet me a $100 that doing so was his right. While it would have been an easy $100 if the guy would have actually paid, I didn’t take the bet. I did have the pro explain to him that I was correct. If he had gone ahead and did try the putt, they would have lost the hole before his partner had a chance to make the putt for a tie. In this case, he didn’t that putt after his partner picked up his ball.

My fellow golf writer Dan Vukelich once ended up winning a member-guest when a player didn’t take the advice of a fellow competitor after his ball came to rest against the flagstick. He just picked up the ball. He was given a chance to replace it on the lip, but refused. When the committee made a ruling, he was disqualified for not completing play on the hole. A ball must be below the level of the hole to be considered holed.

I recalled reading that a ball that could not be immediately recoverable could be replaced by another ball and did just that when I could not find my ball in casual water. Later, I heard that this would not apply to the player who tossed his ball to his caddy and it went into a water hazard and the ball couldn’t be found.

There is no provisional ball allowed when taking relief from a hazard. If you go ahead and play a shot from the other side of the water and happened to find your ball on the green side, you have to abandon it. I had to call a penalty on a player once when he played his original ball. I told him he had to play the other ball and pick up the other one if he wanted to have a score on the hole. He played both balls, which he has the right to do, and discovered I was correct.

You can declare a ball lost without going to search for it. I recall hitting a ball into the woods on a par 3 and then hitting my provisional ball right next to the pin. So I declared the ball lost, However, driving through the woods, my ball was right there on the cart path. So I had to take a free drop. Three shots later, I was on the green and made a six. I had good chance to make four if I could have played the provisional.

Trying to make a decision on what club to use for an unusual bunker shot near the lip, I went into a bunker and placed my feet in position to hit the next shot . I recalled reading a decision that said this was allowed. My fellow competitor thought I had made a mistake, but found out differently after the round when we checked with the professional and I explained that my action was not intended to test the condition of the sand, but just to find if it was even possible to take a stance in the bunker with much of a slope to contend with.

Of course, there was one time where knowing the decisions ended up being costly for me. I hit a drive that went through some trees near an out of bounds. I announced my intentions to play a provisional ball. This one did go out of bounds. So I re-teed with a third ball. I saw it go near to where I thought the first one had gone. We found two balls, one in bounds and the other out by inches. My fellow competitors said they thought the ball in bounds was probably my first drive. I had forgotten to mark my balls differently and knew from reading the decisions that I was lying five, not one at that point.