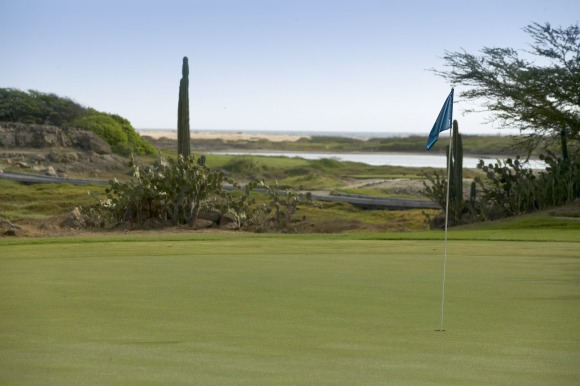 With only 27 holes of golf, playing the game is not the reason most tourists flock to the tiny Caribbean island of Aruba, located just 20 miles off the Venezuela coast. Instead, they come for the miles of powdery white beaches and tranquil, azure warm ocean waters, featuring all types of water activities in the sun where it never really gets cold with average temperatures in the 80s.

However, this could be changing as I heard talk about a truly spectacular world-class course being developed on the eastern tip of Aruba while there for the 16th annual Aruba International Pro-Am. It’s the inspiration of some golf-savvy Americans. The layout reportedly boasts nine holes right on the sea with spectacular elevation changes and views throughout. If it come to fruition, and I certainly hopes it does, it will dramatically turn Aruba into a place that will attract even more golfers than it does today.

Currently, the Tierra del Sol Resort, Spa and Country Club, host for an international field of 24 teams from the U.S., Holland, South America and the Caribbean during the pro-am, is the destination for most serious golfers, offering an 18-hole Robert Trent Jones Jr. design on the extreme northwest corner of the island 15 minutes away from a massive array of hotels.

Although short by today’s standards at only 6, 811 yards from the tips, it seems to play longer, especially when you forget that you are at sea level as one of my partners did until I reminded him why he was coming up short with his approaches.

It’s a challenging desert course that will remind some of those in the Southwestern United States except for the ocean views. Venture off the fairways and you can end up in some juicy sandy lies or in thorny bushes. Don’t make the mistake of reaching in to try to retrieve your ball. You will end up with a bloody arm.

The cooling trade winds that always seem to be blowing at least 20 mph definitely add to the challenge as evident from the fact that only one professional, Jose Montero of Venezuela, broke par in the pro-am despite the fact the course was only playing at about 6,400 yards from the blue tees. On the plus side, the winds do make hot afternoons bearable.

The tricky Bermuda greens can be tough, especially to those more used to bent grass greens. Even when you have looked at the cup and know that the grain is growing to the brown side, getting the right speed on your putts is difficult and three putts are common.

Green fees range from $112 to $159 in the high season—mid December until the end of March. Golf packages that include accommodations in nearby villas and condos are also available. That’s where I enjoy hanging my hat, staying away from the temptations at the casinos.

Sitting next to Bas van den Nieuwenhijzen, general managing director for the resort, at the awards dinner, I did find out that a new greens keeper from Canada had been hired to correct some grass maintenance problems. In addition, he mentioned that future plans called for the addition of nine more holes on the other side of the marshland nearer the water plus a hotel.

The Links at Divi Aruba offers golfers a resort-friendly shorter 9-hole course, playing only 2,952 yards from the tips, that is no pushover with water coming into play on six holes, including an island green on the final hole. I think the Paspalum greens are easier to putt.

Aruba is out of the normal paths of the hurricanes that roam the Caribbean and doesn’t get as much rain as other islands, resulting in more of a desert look. The people are friendly, but sometimes operate on “Island Time” just like they did in Costa Rica during my 30 months there. The U.S. dollar is accepted everywhere and you can clear customs at the airport.

While the island’s reputation did suffer after the disappearance of collegian Natalee Holloway in 2005, it has definitely rebounded and quite honestly is just as safe as most places back home when you get a bad guy involved..