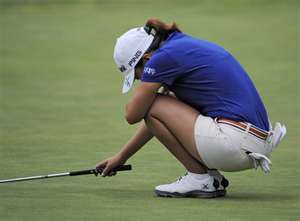 On Sunday, April 1, there was incredible drama at the LPGA Kraft Nabisco Championship, though I.K. Kim wished the outcome had been merely an April Fool’s joke.  Kim had the victory literally in the grip of her putter when she lipped out her birdie putt on 18, then went to tap in the remaining 1-footer for a ‘pretty sure’ win; but then, the unthinkable occurred: Kim missed the 12-inch par putt, which she later said broke slightly right as it raced around the cup.  A stunned gallery didn’t quite know how to react.  Neither did I.  Kim was dumbfounded.  She made the bogey and traipsed back down the bridge en route to a playoff at the 18th instead of the Champion’s trophy presentation.  No one expected Kim to triumph in that playoff to eventual winner, Sun Young Yoo.

However, Kim’s missed putt is only part of the story here and helps to illustrate the differences between men’s and women’s professional golf.  First of all, many golf fans knew nothing of what happened.   This major, the LPGA’s first of the year, was not carried on ABC, NBC, or CBS, but instead on The Golf Channel.  Today, I tried to find official video clips of the putt.  There was only one on YouTube; not even on The Golf Channel’s website.  Coverage of this major didn’t make Sports Final Edition Sunday night shows in many markets.

Do you think that had something like this happened to Phil, Rory, Tiger, Keegan, or Ricky, instant news of this mishap would not have been seen, ad nauseam, all over the world for days?  Hardly.  I suppose, in a way, it is a relief to I.K. Kim.  Watching her miss that putt, her chance at immortality within the league of LPGA Majors winners, is not something I want to relive and I’d surmise, neither does she.  We’ve all been there, missing putts in state tournaments, club championships, and weekend betting games with friends.   But not likely for stakes the size of a major LPGA crown.

For all the talk about getting women into the game with initiatives from every men’s, women’s, professional, amateur, and business golf organization in existence, why not try first to get LPGA coverage back on network television….where it belongs?  No offense, Golf Channel (yes, I do love you), but people do what they see on television.  Even in this modern age of media, not everyone watches cable coverage.