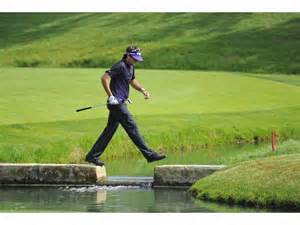 The mercurial Bubba Watson carded an 83 after three balls found the water on Bay Hill’s par-5 6th, earning Watson an 11. Bubba finished last after the first round at this week’s Arnold Palmer Invitational. He then promptly withdrew from the tournament. In his defense, a couple of post-round tweets from @bubbawatson said this: “Just wanted to tell my fans I’m sorry I had to withdraw from @APinv this week. My allergies have taken over! It’s hard to focus when your head’s all discombobulated from medicine and pollen.”

Thousands of golfers have suffered and played through allergies and headaches during days on the links. Was this response reasonable or merely an excuse to end the misery a first-round stratospheric number can create? In the end, it is the player’s call.

When is it justified to walk out on a tournament? If you asked my dad, Buck Parrott, the answer would be ‘never’….except for serious injuries. Although Dad passed away in July of 2009, the anecdotes from his life frequently come to mind, especially when events like Bubba’s withdrawal pop up.

All three brothers and I have played competitive golf events beginning at age 8, courtesy of my Dad’s superb golf instruction. Dad was a plus-handicap and had won dozens of tournaments in his day, but first and foremost, he was a gentleman as well as the most honest man you’d ever wish to know.  His greatest joy was awaiting the results of any events we competed in and hearing tales from the front. My brother Chris shared this story:

“I was playing in a big tournament and having a really poor day. After a run of several bad holes, I knew my score would be well into the high-80’s or maybe even 90. Not wanting to continue the suffering any further, I walked off the course, turning in the big WD. When I got home, of course the first thing Dad asked was ‘What did you shoot?’ I replied that I didn’t know. He asked ‘what do you mean, you don’t know? You always know what score you turn in!’  With a little more prodding, Dad finally got the truth out of me. When I told him I walked off, he gave this look that just pierced me. He sorrowfully shook his head but said nothing and walked away, out to the garage, where he usually went to contemplate life or get away from Ma or us kids. He stayed there awhile and did not speak to me for the rest of the day. I felt terrible…….I had disappointed him. But he was right. I should have never walked off of that golf course. You have to finish what you start, no matter what. Just because things get rough is no reason to quit. In his eyes, quitting was the worst. To this day, I’ve never even thought of doing that again.”

Personally, I’ve had injuries and played through them. One time, I pulled something in my left shoulder half-way through the round and by the 17th hole could no longer take the club away past hip high. But I finished, shooting 76 in the process. How? I don’t know. I’ve had horrible rounds in major competitions: at former USGA President Judy Bell’s annual event, the Broadmoor Invitational in Colorado Springs, one of those rounds surfaced. I carded a 90 while my playing partner, who was keeping my scorecard, shot 69. When I approached the Scorer’s table, I overheard one of the committee members say to her “wow, you shot 69 while playing with someone shooting 90??? That must have been hard to deal with!” I’ll admit the score was much worse than I played, but who ever cares to know that? My playing partner graciously demurred from the question; I signed my card and slinked away.

Anyone who thinks they will never shoot a bad score will indeed be humbled by the golf gods – and you may include those who ridicule you because of a high score. When it comes, accept it. Own it. You can look forward to redemption later when the tide turns. You know it will.