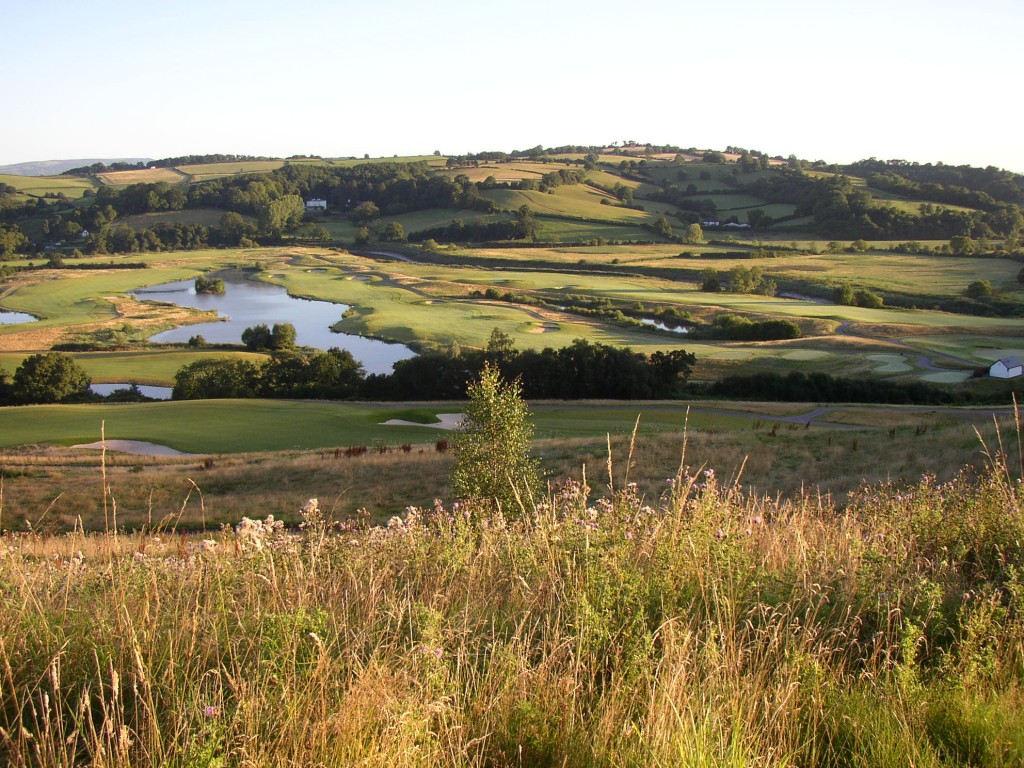 Morning dawns on the Twentyten at Celtic Manor in Cardiff, Wales

There is little doubt the U.S. Ryder Cup team’s intent is to retain The Cup as they travel to Celtic Manor in Cardiff, Wales later this month.  Team captain Corey Pavin has made his selections and now the strategy, the mindset, team-building, and the hoopla will all commence.   Probably the last item on the Captain’s mind is defeat.   Reliving the disastrous results of the 2004 Ryder Cup at Oakland Hills Country Club in Bloomfield Hills, Michigan may not top his list of ‘Things We Like To Think About’ but it is said that those who do not study history are doomed to repeat it. I believe analyzing what went wrong can only strengthen the resolve to win.

A visit to the Ryder Cup telephone operators’ trailer after Friday’s opening rout of the American team’s efforts in the 2004 event at Oakland Hills prompted one of the ladies of the Detroit area’s Women’s District Golf Association, who were answering the main phone lines, to remark, “You should go talk to those boys.  They really need your help!”

At first I chuckled at the thought of how preposterous it would be to break through the practice range ropes and impart my wisdom upon Hal, Jackie Burke Jr., Rick Smith and the boys.   But then, after pondering a week’s worth of Oakland Hills observations and not seeing much practicing going on, maybe the ladies weren’t far off.

As a veteran of over 25 USGA national championships, hundreds of local, state, regional, and international golf events, shouldn’t I have learned something in 40+ years of competition that the 20-somethings don’t know?

OK, so I stopped chuckling and changed my mind.  Maybe it is too late for that particular crop of Ryder Cup players but it is not too late to assist the team in this year’s contest at the Twenty Ten Course in Wales.

Here’s what I have learned during my lifelong journey through golf:

The Ryder boys most likely thought the talons of The Monster would not reach out to pierce them.  Much was made of the fact that Oakland Hills, at 7084 yards, was not long by today’s standards, though it plays to a par of 70.  But they forgot that great courses stand the test of time and endure improvements and renovations quite easily.  One of the more noted players on the American team had not even been to the course prior to Tuesday’s practice, though he had been to Michigan several times.  Gargantuan drivers, Hi-tech clubs, performance golf balls notwithstanding, you still have to get the ball in the hole.  In order to do that, you have to become acquainted with the intricacies of the layout.  You can’t assume the course is to be conquered like any other.  The Twenty Ten is an unknown entity to this type of competition and having played it myself, know there some tricks up its beautiful and alluring sleeve.

No matter how well you can think through and sleuth out a course you’ve not played, there is always something you won’t know about it simply by hearing tales or looking at the scorecard.  Naturally you will discover this at exactly the wrong time, such as when you need to sink a 3-foot putt you know breaks toward the water – only it is built onto the side of Mystery Hill and everyone except you knows it breaks the opposite way.

In USGA championships, the course is reserved for contestant-only play two days preceding the event.  Trying to find an open tee time before 3pm is fruitless, especially if you had designs on playing 27 or 36 holes, like many of us did so we could test the course under morning and afternoon conditions.   At Oakland Hills, the entire course was available to the players for 4 full days.  In three afternoons I saw exactly 3 shots by Americans.  Players had wrapped up their course practice before 2:30.  Many fans who had come out to view afternoon practice rounds toured virtually an empty course except for some of the Europeans who were still playing toward late afternoon.  With 20 out of 28 matches contested in the afternoon, why would you not play a practice round then?  Convenience?  Scheduling?  Weather too hot?  Social demands?  Greens can change dramatically from morning to afternoon, when sun and wind can bake and crisp the greens to almost unplayable conditions.  Oakland Hills is notorious for this and players should have been out there watching their putts slide by the pins…..and keep going off the greens.

–          Examine the greens and putt from multiple positions because all tournaments are either won or lost there.

The pins used for practice rounds will rarely be used for actual play.  Look for spray paint dots on the green to show where tournament pins will be.  Now, go ahead and pick spots around the green and putt to the dots for some meaningful practice.

European captain Bernhard Langer compared the undulating and slick greens at Oakland Hills to one other venue noted for its treacherous greens:  Augusta National.  If nothing else, the American team should have spent all of their practice time navigating those greens.   And by the way, they could have gone out after losing their matches to practice; playing the course in between rounds of match play is not against the rules.

The members of a club are more than happy to share their intimate course knowledge with you.  They’ll know the short-cuts, the places not to be, and general breaks of the greens.  Get to know the pro and the course superintendent and they’ll provide you with additional information.   Then at least you’ll have a few fans!

–          Don’t make major changes in your swing or your equipment a week or two prior to the event.

We all know what Phil Mickelson did but can only guess why.  Logic could tell you that if the exact specs of his old equipment were duplicated it shouldn’t have been a problem.  But, psychologically, just the fact of changing equipment has to have an effect, if only to question what you have done.  Doubt about anything is never good.  Stay with what you have and bring it to the dance.

Normally I don’t get much sleep.  During one national amateur I decided to sleep in because my second day tee time wasn’t until 1:30.  I had played a superb round the first day and wanted to continue my good habits.  Normally waking up at 6:30, I kept trying to go back to sleep because I thought I needed to rest. Finally getting out of bed at 10am, I was lethargic and useless.  Playing some of the worst golf of my life, I shot myself out of contention.   I have never made that mistake again.

As for food, never believe your Mexican host when he tells you the pepper is not hot and the fruit won’t hurt you.  During the 1991 Mexican Women’s Amateur, I was ailing all week.  I’ll spare you the rest of the details.  And, when you go to strange climates in foreign countries, do not assume the air quality is the same as in the USA.  It isn’t.  The grasses and flowers are different and many countries don’t have the pollution controls we do in the states.  This will play havoc with your upper respiratory system.  Many handkerchiefs and tons of Kleenex never left my hand for very long in Mexico…..well, maybe long enough to hit my shot.

The Tiger Woods – Phil Mickelson pairing Captain Hal Sutton orchestrated was not a match made in heaven.  Sometimes we are forced to play with partners not on our wavelength and if so, you need to make the best of it.  No one intentionally tries to mess up.  If you give the rolling eyeball treatment please know that sometime within the round you will mess up worse and you’ll want your partner to forgive you.  If the partnership isn’t working out, don’t play with that person any more.

Until the match or round is over, keep trying.  Golf is fickle and you never know what will happen to the other guy.  If you give up, you’ll never get the chance to find out.  The 18th hole at Oakland Hills surprised everyone:  par would have changed the outcome on a number of matches.  The Twenty Ten course has a number of risk-reward holes which could send matches see-sawing until the last hole.  Lopsided matches ending on the 13th or 14th hole may not be an issue this year.

There are certain truths to this game that care nothing about status, record, or reputation.  Listening to the advice of those who are older and more experienced is never a waste of time.  And sometimes, you can still learn from those who are younger as well if you simply make the effort to listen.