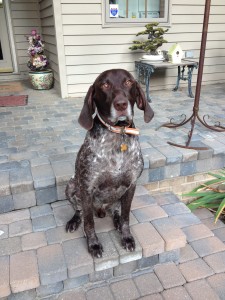 Oh my, my.  It’s official.  The gravy train is over because, according to the vet, my dogs are fat.  Yep, while I wasn’t looking, the pounds crept up on my pooches, the aptly-named Pudge and Starr.  My mistake was portion-control related: I used the wrong measuring cup for the food bowl.  Yes, I do let them run through the woods when I walk my daily 4-5 miles, but apparently it didn’t counteract their intake.  But I defy anyone to stand there, unaffected, when your beloved pups are in a perfect sit, looking up at you with mournful eyes and doing the doggie-whimper-feed me-feed me routine.

Starr is almost 7 years old, though she does get around alright.  Born with congenital hip dysplasia, she tires more easily than Pudge, but she is very enthusiastic, spinning, and barking, and doing pirouettes when ‘Mom’ puts on her walking shoes.  And she knows when to say when at the food bowl.  Four-year-old Pudge, on the other hand, does not.  He would eat bags of food if I left it out there.  He eats quickly and when finished, lays right next to the more daintily-eating Starr and hopes beyond hope that she will leave some morsels.  She used to….but not now.  She knows his shtick.  And it is just as well because I worry about Pudge.  Not only had he developed the poochie-belly, but he had also gotten lazy, sleeping far too much, and had to be pushed outside to do his duty.  Try that on a 100-lb. dog who is supposed to weigh 80.  After a thorough check-up, the bad news was it cost $200+ worth of tests to find out the good news: he was just too fat.   But guess what?  After only two weeks of strict portion control, fewer treats, and more exercise, ol’ Pudgie has noticeably lost a few pounds.  He has a lot more energy too.

Is there a lesson here, folks? 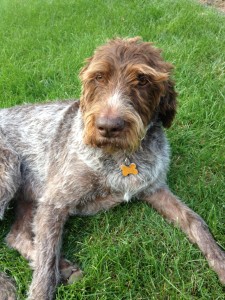 Starr, the Lady of Leisure.

So many people come to me with weight and health problems, aches and pains, and really, it all boils down to some very simple facts: they are eating too much, getting too little exercise and not enough sleep, drinking little water, consuming too much salt and sugar and too few fruits and vegetables.  Winter can be a diet killer if you live in the frozen north.  It is not fun to spend 10 minutes bundling up in Gore-Tex, sweaters, boots, mittens, and ear muffs and then fight the ripping winds with your eyes watering and nose running for those multiple miles (me, not the dogs….).  But those of us with fortitude do it.  Afterwards, you really feel as if you have accomplished something.  However, there is one caveat: be wary of the temptation to come back in thinking you ‘deserve’ your own treats and sweets.   It’s bad enough I get suckered into giving Pudge and Starr both a Milkbone; but now I am smarter: I break it in half.  They think they’re getting a deal…….and I save them the calories.