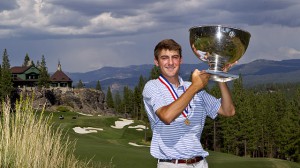 Scottie Scheffler with his U.S. Junior Amateur Championship trophy, with the Martis Camp Lodge in the background. (USGA Photograph)

Truckee, CA:  Taking four holes in a row to close out the final match in the 66th U.S. Junior Amateur, 17-year-old Scottie Scheffler of Dallas defeated 16-year-old David Riley, of Hattiesburg, Miss., 3 and 2. In his fourth and last appearance in this event – – since he’ll no longer be an eligible junior – – Scheffler became the fifth different Texan to win Junior Amateur since 1999, a list that includes Hunter Mahan, Matthew Rosenfeld, Cory Whitsett and two-time winner Jordan Spieth.

On the magnificent Martis Camp golf course in California’s High Sierra, it was a well-played, well-run and well-attended final, as several hundred patrons followed the pair.  A reported 100 college coaches were here during the week, scouting prospects who commit to universities at ever younger ages.  The future talent was plainly obvious.

During a match that featured booming drives, magnificent 200-plus yard approach shots and cat-burglar nerves on more than a few 10-foot putts, Riley led for the first 22 holes.  It fell to all-square on the 23rd, only to see the University of Alabama-bound Riley take back the lead and go two up with 9 to play.  Scheffler then went on his run, helped by two lipped-out Riley putts and an unfortunate penalty.

On the 304-yard par 4 16th hole, Riley’s ball that sat on the fringe of the green, 28 feet from a birdie and close to a water sprinkler.  He could have taken relief, but instead addressed the ball and saw it move.  After consulting with USGA rules official Skip Gist, he took a one-stroke penalty.

“I addressed it and it just rolled a little bit,” said Riley. “So I got a one-stroke penalty. It is what it is. I thought it was a pretty decent lie, so I just stuck with it.”  After lagging a putt that came up 8 feet short, Scheffler conceded Riley’s bogey, two-putted for a par, and thus ended the match.

Said Scheffler, who has committed to play his college golf at the University of Texas:  “He called a penalty on himself.  It takes a lot of heart to do that.”

Both players were among the early favorites.  Scheffler qualified for match play in each of the past three years, and is ranked 34th in the World Amateur Golf Ranking.  A junior at Presbyterian Christian High School, Riley reached the round of 32 last year, and then ran into James Liu, the 2010 champion and 2012 runner-up.

The Coolest Cat on the Course 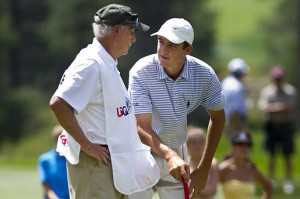 The U.S. Junior Amateur is one of 13 national championships conducted annually by the United States Golf Association, 10 of which are strictly for amateurs.  All rely heavily on volunteers.  And if the USGA has a Volunteer of the Year award, a prime candidate is Scheffler’s caddie, David Harmon.

A resident of the California town of Cool, about an hour’s drive west of Truckee, the “largely retired” Harmon is a member of the Auburn Lake Trails Golf Club.  A year ago he caddied at U.S. Girls’ Junior Championship at the Lake Merced Golf Club, near San Francisco. When he heard about Martis Camp, he again volunteered.

“The next thing that happened is that I got an e-mail from Scottie’s mother,” recalls Harmon, “and when she said OK, it was then up to the player and caddie to agree to work together from there on out.”

During the 36-hole finals, many in the gallery were mystified as Harmon lagged behind his player, struggling to keep up with the players, USGA officials and even the crowd.  Scheffler occasionally ran back, grabbed the clubs he needed, and ran back to his ball.  After the match, the champion praised his looper, albeit with a left-handed compliment.

“He’s probably the best caddie I ever had because he was probably the worst caddie, honestly. I mean, we talked, but he wasn’t telling me how to play shots.  Sometimes I start playing a little too quick when I’m nervous, but I couldn’t with him. I’d get to the ball, I’d get my yardage and prepare for the shot. (Then) he would show up, I would grab the club and shoot.”

Well, Harmon was a bit slow.  Then again, he hasn’t played golf in two months because of a shoulder injury, faces surgery on it in two weeks, and won’t play again for a half-year.  He had blisters on his feet during the final.  The Martis Camp course sits at an altitude of nearly 6,000 feet, and runs up and down mountainous terrain.  But including a pair of practice sessions, the 73-year-old Harmon ground it all the way out with Scheffler’s bag on his shoulder, for 11 rounds in eight days!

The man from Cool was clearly the coolest cat on the course, if not the toughest stud in the entire tournament.