With the notable exception of my fine colleagues at The A Position, an awful lot of golf and travel writers are as cynical the cops on Law & Order, self-absorbed as supermodels and a black hole around free food and alcohol.  But because our reviews and features about destinations, resorts, golf courses and restaurants hold influence over potential customers, we get treated to stuff that we otherwise shouldn’t deserve. As Golf Journalist & Radio Host Bill Huffman describes our lot, we are “underpaid yet over-privileged.” 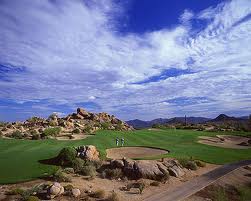 Troon North has twice hosted rounds for the Media Classic.

Next week, more than 80 golf and travel writers will converge on Scottsdale for the ninth annual Xona Resort Suites Media Golf Classic, where we’ll be afforded luxuries usually reserved for those in a much higher pay grade.  Hosted by the Xona Resort Suites hotel, the event is underwritten by the Scottsdale Convention & Visitors Bureau, the Fountain Hills & Fort McDowell Visitors Bureau, a rotating slate of golf courses, and vendors of wine, spirits and Bridgestone golf balls.  For five days we fan out to some of area’s best public and private courses for competition and camaraderie, and in the evenings pound down freely poured adult beverages while plowing through enough food to fatten Bangladesh.

For a handful of journalists fortunate enough to have attended all eight of the previous Classics, it is clearly the highlight of our golf year.

In fact, there’s nothing quite like the Scottsdale Classic in that space where journalism intersects with hospitality, leisure, food and golf.  In the week before the Masters, the Golf Writers Association of America holds a brief tournament and a dinner, and yet the members don’t have the time, or frankly the business need to hang out together, since they share information while on assignment at tournaments.  While small groups of travel and golf writers see each other on “familiarity trips” to specific locations, the Classic is the singular major gathering of the year.

It’s a place to catch up, share war stories and discover new business leads, the latter a critical thing in a profession as plagued by underemployment as any other.  It’s also part of the seldom-discussed process by which authoritative and interpretive golf and travel information gets to consumers.  And it’s why astute readers might sense an uptick in the number of Arizona stories that start appearing shortly after Holiday Season. 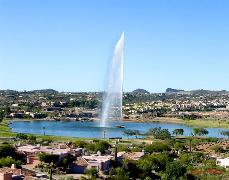 The main fountain is a Fountain Hills landmark.

The brainchild of Huffman, the Classic blossomed almost from the moment he presented the idea to Resort Suites’ founder and former owner, Gordon Zuckerman, and his crack marketing expert, Melissa Linden.  “Gordon had once hosted a trip for several journalists and couldn’t stop talking about how much fun he had,” Huffman recalls. “He called the writers ‘the chemists’ because he said they’d ‘stir the broth that got other golfers to visit.’” Resort Suites had always maintained an ambitious advertising program, but Zuckerman came to believe that additional editorial coverage built trust and grew the number of paying customers.

In the wake of September 11, the initial Classic of 2002 wasn’t the greatest moment to promote travel.  Resort Suites couldn’t be certain of how much coverage the event would generate from the eclectic individuals who work for magazines, newspapers, radio stations, wire services, television stations and Web sites.  “But Gordon didn’t worry about specific assignments or an output,” Huffman recalls. “He told everyone on his staff to just show the journalists a great time and they’d write about it.”

Some journalists produced stories that appeared a week after the Classic.  Others didn’t get the chance to write about Scottsdale or a specific course until a few years later.  But Zuckerman understood the long-term dynamics.  “We know that several layouts ended up on ‘best course’ lists because the writers who attended talked about their experiences with many of their colleagues and editors,” Huffman explains.

Although Zuckerman sold the property several years ago, the new ownership remodeled much of the hotel, re-branded it as Xona Resort Suites, and retained the first-class nature of the Media Classic.  Indeed, the rotation for this year’s event starts with a practice round at Desert Forest in the community of Carefree.  An elite private club, Desert Forest is Arizona’s oldest true desert layout and since 1967 has been a fixture on Golf Digest’s “Top 100 Courses in America” list.  We’ll also play the Superstition Mountain Golf & Country Club course, the original We-Ko-Pa Cholla course, and the Southern Dunes Golf Club, which annually hosts both U.S. Open and PGA Tour qualifying.

Granted, we are spoiled, a point often made by friends not in the business.  Then again, quite a few golf publications pay wages that by comparison make farm labor ridiculously attractive.  The experiences, then, are the primary reward. 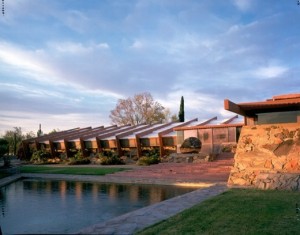 While a few of the travel-only writers will tour Frank Lloyd Wright’s Taliesin West, old downtown Scottsdale, or hang out at the Fairmont Princess next door to Xona Resort Suites, most of us will concentrate on staying out of Arizona’s rough.  After all, a tee shot that strays be only a few feet off  a fairway takes one into the territory of poisonous snakes, mean-looking javelina and jumping cactus.  No one complains, at least once the sharp-pointed needles are removed from the buttocks.

There’s a certain symbiosis between journalists and the hospitality industry that doesn’t get talked about all that much in public.  Convincing someone to write about a course, resort or piece of equipment is what’s known in the marketing trade as “earned media,” and experts figure it’s worth two or three times comparable space for paid advertising.  Since the publications that cover travel expenses and pay decent fees are an endangered species, the destinations often help out to some degree, and especially for small outlets.   In the pure journalism world of The New York Times, that would be a conflict of interest.

In the real world where most of us live, it’s up to an ethical writer to craft a legitimate piece that’s informative, fair to readers and subject alike, but doesn’t read like a fluffy press release.  At times this is an uneasy dance, because an accurate appraisal might mean stepping on a toe or two.  And if one encounters really bad service and bed bugs, it’s probably best to tell the proprietor why a story is not being written, giving those folks who are just trying to make a living a second chance.

The Media Golf Classic makes it easy to balance the factors. Everyone is charged a modest entry fee and participants need to pay for their own transportation to Scottsdale.  Rooms, golf and food are covered, unless an employer wants to pay the expense.   Notes Huffman: “We believe this arrangement frees the participants to write honestly about what they do and see.” 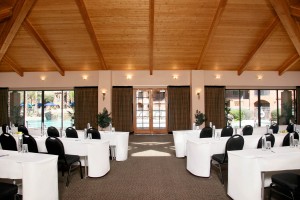 The singing cowboy has moseyed on, but this is the spot in the Xona Resort Suite Pavilion where he and his horse performed at the 2002 Classic.

Since 2002 the events and sights have largely been memorable.  No one who attended the first Classic will forget the guitar-playing cowboy singing Ghost Riders in the Sky while perched on the back of a very real horse in an indoor pavilion. Rocker Alice Cooper often graces the event, and the Classic can count on appearances from the likes of Arizona residents Tom Lehman, Brandel Chamblee and Gary McCord.  Then there was a well-known instructor who gave a clinic last year and decided it might be funny to insult the quality of the swings of all the writers in attendance, while mailing in a low effort presentation.  He probably earned less media than a bed bug, and is as unlikely as the singing cowboy to be on the 2010 Media Classic schedule.  But whatever new happens this year,  it’ll likely be worth a story.