If you think Facebook consumes too much discretionary time, beware of the allure of World Golf Tour (WGT), a virtual game with the potential to suck up hours like a weapons-grade Hoover.  That time will pass pleasantly, however, for this free, high-definition and addictive online game puts your golfing avatar on great courses, including Bethpage Black in New York, the Ocean Course at South Carolina’s Kiawah Island and, among others, Edgewood Tahoe.  And thanks to WGT partnerships with the United States Golf Association and the Royal and Ancient, players can also compete in “virtual majors” on the same courses used in real life, including this year’s Open at the Old Course at St. Andrews; the U.S. Women’s Open at Oakmont; and, in a special event held at Pebble Beach. 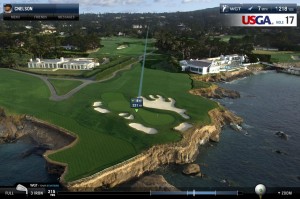 A reverse angle view of the 17th hole at Pebble Beach.

The competitions offer the chance to win modest sums of cash and significant prizes.  The winner of this year’s USGA Virtual Championship – – a player code-named BolloxinBruges – – earned a 2011 trip to Congressional and replica of the Open trophy.  AvatarLee won this year’s Open at St. Andrews, by a mere two shots over BolloxinBruges, the latter a gamer who sounds as formidable as Tiger at his pre-scandal finest.

There are several different types of games besides the majors.  For example, the site allows individuals to introduce themselves to other WGT members and play one-on-one matches.  Players can also hook up and create their own virtual country club, and start tournaments to determine a club champion.  I recommend starting out with the frequent “closest to the pin” events, nine shots that offers basic and repetitive practice on full swings and chips.   The rest of the game gets considerably more complicated, in particular the intricacies of putting.

Roughly two million players from about 180 countries have signed on as members since its launch in October of 2008, while the site gets about 1.6 million visits each month, says Lincoln Silver, marketing vice president of the San Francisco-based World Golf Tour Inc.  Mot of the players are not hard core gamers, accustomed to blasting aliens on Halo and humans on Call of Duty.  And WGT participation doesn’t even require a game box, just a computer. “We tend to get primarily men between the ages of 20 and 50, with 35-to-40 being the sweet spot,” explains Silver.  While that’s a little older than typical gamers, the younger demographic represents potential.  Virtual golf, in fact, may be the fastest growing segment of a sport struggling to re-engage former players and attract new ones. 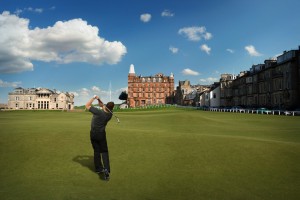 The 18th at The Old Course.

The USGA and the Royal & Ancient hope that exposure to realistic versions of a championship and exclusive courses will whet an interest in both watching and playing the real thing.  (Equipment manufacturers and sponsors that back real life tournaments are also forming partnerships with WGT, obviously also hoping gamers will develop a brand loyalty when it comes time to purchase real clubs, balls and services.)  “Not everyone can afford to get over to Scotland and play the Old Course, or buy a ticket to the U.S. Open at Pebble Beach,” adds Silver.  “The game also gives players an idea of all the factors that go into the shots that the professionals make.”

Still, the winners in the big events are players with pro-quality gaming skills and perhaps an obsessive-compulsive diagnosis.  Drives, fairway irons, bunker shots and putts are all influenced by a “swing,” the timing of which is dictated by the click of a computer mouse.  In addition, the shot’s lie, elevation changes, wind and green speeds are greatly influenced built into each virtual course.  To excel takes nearly as much work, practice and talent as earning a living on the PGA Tour, which can be attributed to the beautiful accuracy of the online courses, an authenticity that mimics the real thing.

WGT game-markers take hundreds of thousands of photos and laser measurements in developing a virtual course, and boast of topographical accuracy to within 1 and ½ inches.  I believe them, especially after playing Pebble Beach during the USGA’s media day in early May, and a special WGT Pebble Beach challenge.  Here your avatar attempts to duplicate shots taken during the four previous Opens held at Pebble, in 1972, 1982, 1992 and 2000, including a putt on the 16th green.  In real life, our caddie insisted we account for a severe break that wasn’t obvious; the WGT recreation, which features a grid that indicates sloping surfaces, showed exactly the same thing.

Although WGT can be played for free, its owners count upon the competitive nature of gamers and golfers.  Indeed, it’s what game designers call a “sticky game,” not unlike Zynga’s FarmVille, in which players must plant, grow and successfully harvest crops to move up in levels and expand their farm, progress that can in part be bought but which also must be earned.  The implicit challenge to improve is the sticky stuff that WGT counts upon to compel members to spend real cash.

You see, beginners get a basic set of clubs and balls.  But once some improvement is made, say from Hack to Amateur, an on-line “pro shop” offers clubs that provide 10 to 20 more yards of distance than the standard and free issue, balls with more spin and other useful items for between $10 and $20.  In fact, to even become eligible to buy better clubs, a player has to reach certain levels of ability, which range from hack to amateur, pro and master.  Since the prospect of better performance and rewards is a time-honored recipe for addiction among gamers and golfers alike, it’s clear how one can get hooked on WGT faster than a starving trout on opening day.

For a price you can also field an avatar that’s better dressed and better looking than the basic model.  But excellence in play is what drives most of the online players.

Indeed, information and observations in on-line forums showing players trading regimens and tips for improving shots and scores.  I also found several posts complaining rather stridently about perceived weaknesses in WGT’s programming. The gamers were irked because perfectly duplicated shot routines did not produce the exact same results when the ball bounced upon the green.  It’s an outcome that suggests these particular participants were simply unfamiliar with the random torture of real life golf, well replicated in the virtual world of WGT.