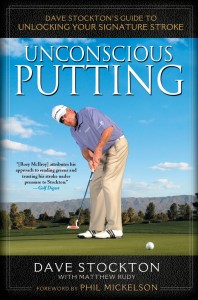 The hardcover book runs only about 100 pages, including the table of contents, an introduction, a forward by Phil Mickelson and acknowledgments.  Set for release by Gotham Books on September 15, the exceptionally quick read will retail for $27.50 – – something of a sticker shock and yet one that just might be instructive.  Since cheap advice is just that, anyone weary of three-jacking greens will find Dave Stockton’s wisdom about putting a value at any price.

In Unconscious Putting: Dave Stockton’s Guide to Unlocking Your Signature Stroke, the PGA Tour’s hottest putting coach offers insights that are accessible to literally any open-minded player. Instead of mind-numbing layers of technical specifics on arcing swings verses a straight path, shoulder angles, the best eye position over belly putters and other ho-hah, the two-time PGA Champion breaks down the art of reading putts, finding a line and simply rolling the ball.  “Putting is a finesse move,” he stresses.  “I’m trying to get you to feel . . . to feel yourself rolling the ball and dropping it in the cup.”

The winner of five major championships, 11 tournaments on the PGA Tour and 14 on the Champions Tour, Stockton and his two sons, Dave Jr. and Ron, have taught a long list of notable professionals, including Mickelson, Adam Scott, Hunter Mahan, Michelle Wie, Matt Kuchar and Rory McIlroy.  Most have seen improvements in their short game after buying into Stockton’s explanation that putting is a small, simple stroke that relies almost completely on touch and feel.  In fact, he equates the art of good putting to that of signing your name; that is, when you are asked to sign an autograph the words go onto the paper with the fluidity of a habit that requires no thought.  But if you’re asked to trace the same signature, the mechanics of thinking makes a good replication almost impossible.

Stockton wants his students to approach putting in the same way, by reading the green, finding the line and pulling the trigger even without the distraction of a practice stroke.  “The last thing I want to see is a practice stroke routine that ends with the player stepping into the ball after he’s done,” he writes, “placing the putter on the ground, freezing and staring down at the ball, and cycling through a series of mechanical thoughts.”  Stockton adds that when he sees a player take more time over important putts, he knows the golfer will lose the touch and feel that got them to the important stroke in the first place.

What Stockton is exploring here is what safety consultants call “unconscious competence,” hence part of the title of the book, which was co-authored by Matthew Rudy, a senior writer at Golf Digest. Unconscious competence is how people fire up the coffee pot, wash clothing and most dramatically, if you think about it, drive cars. Motorists don’t actually think about how far to turn the steering wheel on a corner, or when to scan mirrors or how much to brake, but most do so with remarkable ability a all speeds.  Golfers who develop a consistent approach to seeing the line, speed and pre-shot focus can tap into this ability.

The book is not completely about psychology.  It includes several chapters with practical advice, including reading greens.  Here Stockton explains that walkers have a great advantage over those who ride in carts, since walkers approaching the hole can see predominate landforms and cants that aren’t always visible from the green itself, as well as drainage patterns that will affect the speed and break of putts.  He includes thoughts on various types of putters and ways of gripping the club.  But again, he simplifies the task by pointing out that the back of the left hand is essentially a mirror to the face of the putter.

I’ve reviewed several instructional books that focused on positive thinking and generally came away unimpressed, or at least with the opinion that the recipes described over-promised on the results. Stockton doesn’t remote suggest Unconscious Putting is going to guarantee a eight one-putt greens per round.  With its emphasis on line and speed, most putts will end up relatively close to the hole, with little left to clean up.  Moreover, this is less about positive thinking and more about tuning into one’s natural athletic abilities, which resonated with me on a couple levels.

Several years ago I had a conversation with another two-time PGA Champion who also won the U.S. Open, Larry Nelson, about the similarities between good putting and good shooting in basketball.  While we didn’t use the term “unconscious competence,” we agreed that good shooters have confidence the ball will go in, belief reinforced by a great deal of practice.  And when defenders are whacking your knees, elbow and sticking fingers in your eye, there’s not an ounce of thinking going into that shot.  What’s more, the so-called “shooter’s bounce” isn’t a matter of luck, but of shooting the ball in a high arc with gentle backspin; consequently, slight misses have a great chance of bouncing up from the rim and falling through the net.

Stockton’s ideas of rolling the putt with the right speed is identical.  Instead of jamming a putt into the back of the cup, his method gives the ball a chance to fall into the middle or the side, increasing the percentage of strokes that are blessed with, if you will, putter’s luck.

One can pour through Stockton’s text  in an hour two, which again makes the $27.50 seem costly.  But like Harvey Penick’s Little Red Book, the ideas and diagrams in Unconscious Putting will serve as a useful reference for as long as a golfer continues to play, great advice that’s worth every penny.