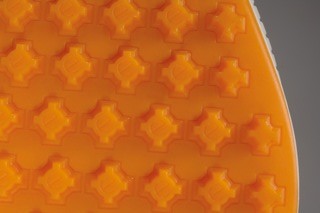 Small nubs of tread, such as in this Ecco Street Premier, may be the future for healthy putting surfaces.

The crunch of metal spikes on a pro shop’s concrete porch was once one of the coolest sounds in golf, right up with a ball plunking into a cup. But when soft spikes emerged in the 1990s, players and courses quickly embraced the footwear evolution.  Decidedly easier on the feet, shoes with plastic spikes also provided good traction and better still, didn’t tear up putting surfaces.

Courses around the world banned metal spikes and as The Daily Show’s John Hodgman would say, “You’re welcome.”

The problem, however, has not remained solved.  Damage from a new generation of soft spikes is a troublesome issue for superintendents, green committees and players forced to roll putts over a green that looks as if it’s just been hit by a John Deere 714 Mulch-Master. Says Marin Country Club Superintendent Kevin Pryseski, “I never thought that I would look back and long for metal spikes.”

That’s because the old-style shoe had only about 12 points that made contact with the ground.  While it killed grass, the damage was limited to spike marks.  In some new shoes designed to give firm traction to hard-swinging golfers, each individual “soft spike” may have up to 8 hard points.  Although the soft spikes don’t kill as much turf, they can leave a scuff mark up to an inch wide.

“These rototillers,” says Pryseski, “have gone too far.”

In a recent communication with Marin’s members – – the club is about 35 miles north of San Francisco – – Pryseski published a link to a John Reitman article from Turfnet.com, in which superintendents discussed the damage and remedies, including the cost of re-rolling greens during the day.  (http://turfnet.com/view_news.php?obj_id=953) According to several of Reitman’s sources, the major cause behind the soft spike destruction is golfers who drag their feet.  One superintendent rather un-gallantly blamed women.  Others blamed seniors.  And juniors.  I’ve seen fat guys and healthy young men drag their feet, a no-no on greens that has nothing to do with one’s age, gender or condition.

While some courses have banned the more aggressive plastic spikes, most course operators are reluctant to engage in policing footwear.  Pryseski, who clearly understands the power of positive reinforcement, makes it a point to stop and personally compliment golfers who are wearing Ecco Street Premier shoes, and other brands with pebbled tread designs. These casual golf shoes leave temporary dents in soft greens, but don’t rip turf.  And in print Pryseski has made the suggestion, albeit indirectly, that golfers need to step more carefully.

“There’s not much you can say to people about picking up their feet,” added a New Jersey-based superintendent in the Turfnet.com story.  “Some of our better golfers try to police it internally.  I like that; it takes me out of the equation.”

Fashion may ultimately solve the problem as more shoemakers follow Ecco’s lead.  Callaway, Adidas, Puma and Nike, among others, are producing shoes with rounded pebbled treads. What’s more, Tiger Woods has been wearing a pair of non-invasive prototypes, although that’s probably more about his Achilles tendon and knees than spike marks.

Future golfers will never get to experience the distinctive sound of metal spikes clacking in a locker room, which was almost like a starting gun that had players salivating about getting to the first tee.  In some dimension it’s a loss for the game, but in the here and now it’s a gain healthy greens.  And if we can get rid of the turf-ripping types of soft spikes, superintendents can keep those healthy putting surfaces playing much more straight and true.