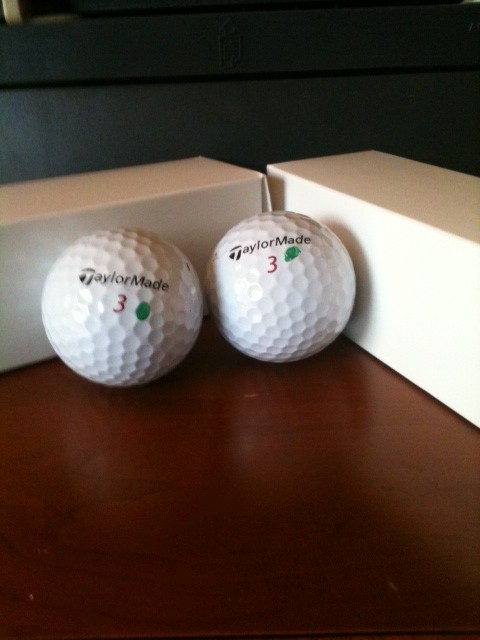 Our Penta 5's came in unmarked boxes, which only added to the test's cool factor.

In early February TaylorMade Golf introduced the first and only five-layer Tour ball, called the Penta TP5.  Each of its five layers is reputedly engineered to improve performance in five key shot categories – – off drivers, long irons, middle-irons, short irons and partial wedge shots.  And like the high performance balls now offered by competitors – – including Titleist’s Pro V-1, Bridgestone’s 330 series and Callaway’s new Hex Black Tour – – the Penta 5 ball is designed to spin less on drives so that it yields more distance, while spinning more on short irons for hop and stop performance on greens.

This is as mystifying as a thermos, which keeps hot things hot and cold things cold. How, as the old quip goes, do it know?

In any event, in advance of the Penta 5 release I acquired a couple dozen  – – which came in a plain, white and unmarked box – – so that my pals at the Marin Country Club could give them a test against the balls they regularly play.  These are avid golfers in their 50s and 60s, who play at least two rounds per week.  All were excellent multi-sport athletes in their younger days, and still participate in sports other than golf.  With handicap indexes that range from 8.5 to 13.3, they represent better-than-average players.

The Penta 5, by the way, carries a suggested retail price of $45.99, which is comparable to the Pro V1, Hex Black Tour and Bridgestone 330.  My friends clearly prefer high performance golf balls, so the Penta is in the wheelhouse.  We’ll start with their comments – -which come straight from the golf course – – and then give TaylorMade’s take on how the ball knows when to either spin or not.

Craig Mukai 13.3: The new Penta TP5 has a solid feel off the driver and a good sound. I use the Titleist Pro V1x and the TP5 has the same distance with a bit more spin. I am a 13.3 index player and I think a lower handicapper can take better advantage of this ball. I do like the soft feel of the Taylormade with the short irons and around the green. This ball has a nice hop and stop spin to it and saved me strokes. When I get to be a bit better driver of the ball, I will put this ball in my bag.

Mike Haas 8.5: I played it 2 Sundays ago, then played it side by side this past Sunday with the Pro V1. It’s definitely long – – as long (or longer??) than the Pro V.  I didn’t lose much off the tee at all.  When I hit it well I was in places that I have only been with the Pro V1 before. The mid irons and short iron shots felt good and the ball spins well.  Good control of the shots.

I think the compression is a little better on the Pro V1.  It just seems to come off the club-face on a solid hit with more compression.  I prefer the Pro V around the green for it’s feel.  But the Penta 5 comes pretty close.  Again, just a little softer feel and sound on the Pro V around the green and with the putter. The price tags on these balls are similar.  If I had a box of each in front of me, I’d take the Pro V versus the Penta TP5.

Terry Noyer 10.8: Noyer didn’t write up his report, but I was with him on the round where he put the Penta in play, and he proceeded to hit drives on the Marin’s first two holes longer than I’ve ever seen Noyer hit – – and he’s a power player.  “Wow, I love this ball,” he said.  “Can I have another dozen to test?”   Now, the course at Marin is tighter than bark on a tree.  OB comes into play on all 18 holes, with additional waterways or lakes on ten.  But Noyer, in love with his Penta, kept a single ball in play for nearly 18 holes, preserving two for another round.  However, on putts he happened to have the touch of a sturgeon that day, and thus could not blame the three-jacks on the ball.

“I’m definitely going to buy these when they’re out,” he said.  “But are you sure you can’t get a couple of dozen to test?”  Sorry, dude.

Joe Allen 9.0: For a 66-year-old who once was a 4 index, it does not seem to make much difference what ball you use. So for the most part my rounds are played with Titleist, Calloway, and Nike balls, but my preference is the ProV1.  It is rare that a product comes along that produces more than it promises.  But so it is with the new TaylorMade Penta TP5 ball. The ravings of a few friends about how far they were hitting was not hyperbole. After playing with a ProV1 and shooting a 40 on the front nine and then being 7 over through 16, I felt the need to pull out the new Penta.  I was loose, and hitting the ball very well. My first drive with the Penta was hit as well as I had hit a ball all day. The only difference was that I was 15 yards longer and straighter. I thought ‘wow, that was sweet, dead straight with a great launch angle.’  Only problem was that I drove it into the fairway bunker 270 yards away.

The good news is that it flew off the nine-iron softly onto the green.  Two putts later the par.  The feel of the ball off the putter was smooth and soft, much like the ProV1.  The next drive was another bomb only this time I hit it 290 yards with a slight draw. I was beginning to remember my days as 4 index again. The feel of the ball on shorter shots and putts was as good if not better than the ProV1.  The ProV1 is, well a ProV1, a great ball to play.  But the Penta took me back three years to my days of hitting it longer, straighter, and with a wonderful feel off the club.

Two holes is not a statistical sample, but it was enough for me to recognize a very good golf ball and one that will be in my bag and probably in my friends’ bags as well. Two days later, a practice putting session with the ProV1, Penta, and a Titleist Solo confirmed for me the soft feel of the Penta.  A smooth stoke and the ball came off the putter face true and pure.  The Penta just feels softer by a little bit more than the ProV1 with no loss of distance/carry to the hole.  Both are great balls with terrific technology.   I just like the extra distance and feel of the Penta a little better.  Thanks TaylorMade!!!!

While created for TaylorMade’s Tour pros – – including Dustin Johnson, Jason Day, Sergio Garcia and, among others, Martin Kaymer – – TaylorMade executive vice president John Kawaja says “It’s a great ball for every level of player.  You don’t need to have a fast swing speed to achieve excellent distance with the Penta TP5.”  The performance of the Penta TP5 is rooted in its five-layer construction — cover, outer mantle, middle mantle, inner mantle and core – which is engineered to optimize performance in five key shot categories that skilled players need, which are mentioned above.

Kawaja explains that the key to the Penta’s performance is a 28 percent reduction in its core compression, along with what the company calls a “Progressive Velocity Design.”  The result is lower driver spin for more distance on drives, and thanks to the urethane cover and dimple design, that soft feel and spin on short shots.

Titleist has long dominated the premium, high performance ball market with the Pro V.  Bridgestone has had to aggressively market its 330 series by offering custom fittings of players to different balls.  Callaway’s Hex Black Tour is yet another entrant attempting to chip away at Titleist’s share.  The Penta TP5, however, just might be the superior golf ball.  I personally get the most distance from it, and can feel the compression on long iron shots.  Given the honest and forthright opinions of my pals, it’s clearly a ball that discerning golfers should at the very least try.