In mid-January of 2010, a group of experts on various components of golf development gathered in Rome to discuss the steps required to devise an effective Italian golf tourism strategy, with particular emphasis on how to attract more foreign visitors to the southernmost parts of the region known as the Mezzogiorno. Historically the poorest part of the country–and a place where even today many inhabitants speak either the language known as Grico, derived from successive waves of Greek-speaking immigrants, from settlers of the city-states of Magna Graecia dating back to the 8th century B.C. to refugees fleeing the Ottoman Turks a thousand years ago, or else various local dialects incomprehensible to speakers of standard Italian–the regions of Apulia, Basilicata and Calabria are rich in history, culture, cuisine and stunning landscapes. The per capita annual income, however, is only about 65% of the European Union average.

With hundreds of miles of coastline arrayed along three seas, the region stretches from the Apulian heel on the Adriatic, across the Basilicatan instep on the Ionian and down toward the Calabrian toe, poised below the Tyrannian Sea at the Strait of Messina and looking on the map as if it is about to launch Sicily with a swift kick across the Mediterranean toward Spain.

One of the sponsors of the Roman gathering was ItaliaTurismo, the government agency charged with investing in Italian tourism. Italy has millions of foreign visitors each year, but they typically go either to Rome, to the great Renaissance cities of Tuscany, or to Venice. Naples is about as far south as most foreign visitors go. Italians, on the other hand, take their vacations in the south, and every Roman or Milanese I know carries a deep affection for Sicily, whose bucolic pleasures trump its reputation as an axis of organized crime. But neither Americans nor northern Europeans visit the south in any significant numbers.

Italy finally noticed that Spain and Portugal’s historically poor southern provinces had benefitted enormously from their own golf tourism development programs over the last thirty years, but made this discovery just as the real estate markets in both of those countries were collapsing. Portugal’s Algarve is holding up a bit better than the Costa del Sol in Spain, but both have been hammered in the recession. Just as real estate sales in Arizona and Florida and Nevada were to some extent driven by the American consumers’ ability to fund purchases by tapping into the soaring equity of their primary residences, Iberian property markets benefitted from similar property booms in Ireland and the UK. I knew for sure the property bubble was about to burst when, in the winter of ’06 and the spring of ’07 I overheard taxi drivers in Dublin talking on their mobile phones to property agents in Portugal about their investments. Still, over the long run, both countries have, despite the trauma of the last two years, benefitted from developing golf courses, both as part of their tourist offerings and as engines driving the sale of real estate.

Italy now has the chance to do Portugal and Spain one better by avoiding their mistakes. This will take will and imagination, and most of all a determination not to brutalize the splendor of the coastline with out-of-scale high-rise buildings, a la Marbella. At the same time, experts in golf development, such as the group assembled in Rome in January, need to help both officials and developers understand that golf can be a benign, or, even better a beneficial use of the land, preserving and enhancing soil, protecting against erosion, preserving and providing wildlife habitat—particularly lacustrine and wetland environments that are crucial flyways for European birds about to launch over the Mediterranean to Africa—while respecting coastlines and local flora.

One way Italy might recast its golf tourism future is by reclaiming the ancient history of golf in Italy. China is the hottest golf development market in the world. A few years back, I listened to a debate among Chinese scholars about whether or not golf was a “royal” or a “popular” game. Was it a game of the masses or a sport for the privileged? Mao Zedong, meet Old Tom Morris.

A Chinese scholar discovered a painting from, as I recall, the Song Dynasty, of an elegant lady wielding a putter-like club, her caddy-in-waiting discretely cradling an armload of clubs in the background. Marco Polo perhaps saw this painting, the scholar speculated, and somehow introduced the game to Europe, where it mysteriously migrated to the Low Countries and on to Scotland, whose inhabitants then had the audacity to claim provenance. In this scenario, given that China had played some form of golf-like game a thousand years ago, the contemporary version was not in any way to be viewed as an exotic intrusion into Chinese culture, but rather as an elaboration and refinement of a Chinese invention, just as the cannons and muskets that western adventurers brought to China were based on a Chinese invention, gunpowder.

Two years ago, I discovered some evidence that may support the view that golf was introduced to Italy centuries ago. In the garden of the convent in the Church of Santa Chiara in Naples, benches were decorated with tiles showing scenes of everyday life around the city. There are market scenes, and views of fisherman and farmers, shepherds and hunters, dancers and orchards. The guide who showed us the cloister said, “this was the nuns’ TV—they were in seclusion, so this let them see life outside the walls.”
And here’s a picture from one of the benches. Looks like golf to me: 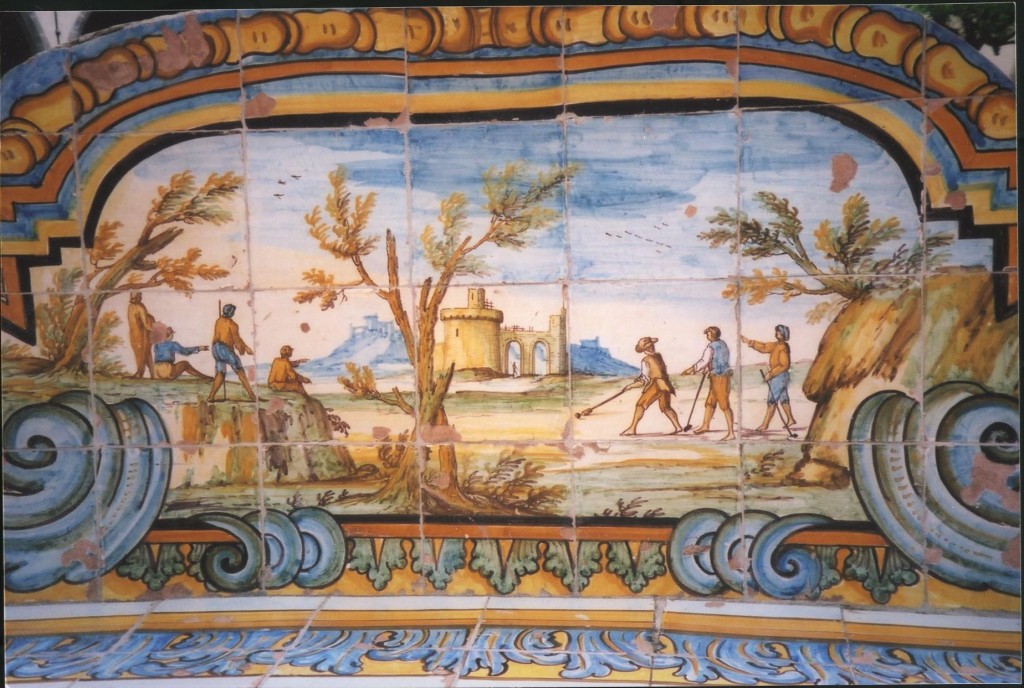 3 Responses to “Golf Tourism in Italy”