When the Wall Street Journal offered Alan Paul’s wife a posting to Beijing as its China bureau chief in 2005, he had no idea that within three years, he would be a rock star, the front man for Beijing’s “band of the year,” the eponymous “Woodie Alan.” (The band’s handle was a combination of Paul’s and his Chinese bandmate Woodie Wu’s first names — a joke surely lost on most of the band’s fans.) 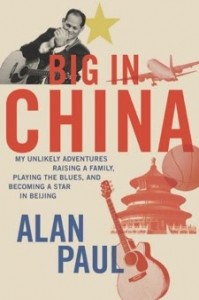 The unlikely saga of Woodie Alan is the subject of “Big in China,” Paul’s modestly framed yet keenly observed and entertaining account of his life as an expat. An inquisitive traveler, Paul relied on the reportorial skills honed by his experience as a freelance writer to shape his response to his rather luxurious life abroad.

An authority on the two elements of American popular culture with the most marked influence on contemporary Chinese life, rock music and basketball, Paul was able to use his Guitar World network to find Chinese musicians to jam with, which led to the formation of the band and its improbable success. The band’s performances were a revelation to Paul, who had always seen himself as a listener and critic and a strictly amateur strummer, but who blossomed as a bandleader and singer in China.

Paul and his wife, Becky — Rebecca Blumenstein, who would win a Pulitzer Prize for her reporting from China in 2007 — lived with their three young children in an expat compound called Beijing Riviera. Becky stays in the background in “Big in China,” busy running the bureau, while Paul, as he had in New Jersey, minds the household and tends the kids.

In China the family enjoys a housekeeper and nanny, which frees Paul to continue writing and to take on a column for the Web version of the Journal. The columns form the scaffolding around which “Big in China” is built. But Paul didn’t isolate himself in the Westerners’ compound. He studied Mandarin, sampled the fabulous variety of cuisine available in Beijing, including the great banquet of street food, and even managed to pass the Chinese driver’s test — an accomplishment that will perhaps be best appreciated by readers of Peter Hessler’s last book, “Country Driving.” And he found his musical family.

The kids were a constant attraction in China. “A growing pack of curious onlookers followed us from our hotel to the restaurant,” Paul writes of a family holiday in Guiyang. “The entire waitstaff crowded around two-and-a-half-year-old Anna, wanting to hold her, kiss her and pose for pictures with her.” Their local guide explained that no one had “seen anyone who looks like Anna, except in pictures. They think she looks like an angel.”

Four-year-old Eli wanted to know why the Chinese were so fascinated with the three American children. “In China,” Paul started to explain, “people are only allowed to have one kid.”

“Eli’s eyes grew fearful; I understood that he was worried that we were going to have to get rid of him and Anna. ‘That’s only for Chinese people,’ I quickly added.”

By the end of their third year in China, Paul writes, the kids were settled in and not eager to return to the States. He worried about the dilemma of “third culture kids,” who “come from one culture, move with their parents to another, and end up feeling like they don’t quite belong to either.” Paul’s not raring to go home either, because he suspects he’ll never find a group of musicians as compatible and in sync as the ones he’s playing with in Woodie Alan.

Paul’s musical friendships provide him with an entree to a China few Westerners see: nights out in working-class bars run by Chinese gangsters, hidden in remnant neighborhoods, or the chance to eat home-cooked meals prepared by his bandmates’ mothers. He writes about what he learns from his fellow musicians with a sympathetic and generous ease. Paul knows and has written about most of the modern guitar wizards, but the musicians of Woodie Alan earn his affection and respect as real bluesmen.

By the time I finished reading “Big in China,” I really wanted to hear Woodie Alan’s music, and found it on the Web at woodiealan.com. Paul’s modesty about his singing voice is appropriate, but the band is solid and fun to listen to, and it is a tribute to Paul’s energy and enthusiasm for the music of his native land that Woodie Alan existed at all. 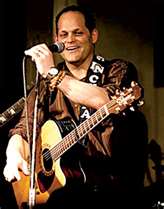 Just as there were shelves of books written about Japan’s manufacturing genius before its economy collapsed two decades ago, new books “explaining” China’s economic ascendancy appear now with great frequency. And though he doesn’t make any large claims for “Big in China,” Paul’s unassuming narrative shines a bright if narrow light on China’s astonishing transformation.

Big in China seems to have struck a cord with readers in ways that more grandiose encounters with China by westerners have not.  Hollywood has acquired film rights, and for sure it’s a story with built-in cinematic appeal–cute kids, culture shock, powerful wife, creative husband, exotic settings–what’s not to like?  Ivan Reitman to direct–cool.

Alan Paul, Big in China: My Unlikely Adventures Raising a Family, Playing the Blues, and Becoming a Star in Beijing. HarperCollins, 272 pages, $25.99.  For a video of a reading by Paul at the Asia Society, see: http://asiasociety.org/video/countries-history/alan-paul-big-china-complete